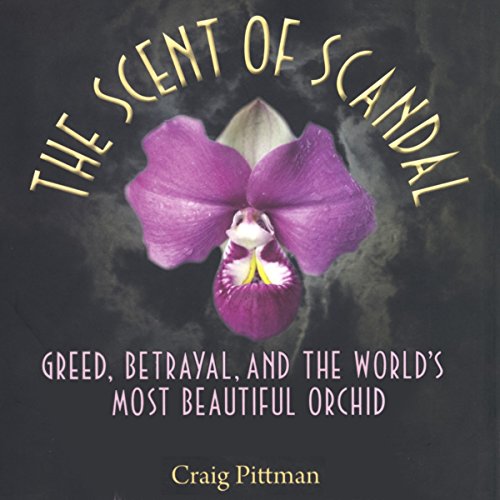 The Scent of Scandal

By: Craig Pittman
Narrated by: Gary D. MacFadden
Try for $0.00

After its Peruvian discovery in 2002, Phragmipedium kovachii became the rarest and most sought-after orchid in the world. Prices soared to $10,000 on the black market. Then one showed up at Marie Selby Botanical Gardens, where every year more than 100,000 people visit. They come for the lush landscape on Sarasota Bay and for Selby's vast orchid collection, one of the most magnificent in the world.

The collision between Selby's scientists and the smugglers of Phrag. kovachii, a rare ladyslipper orchid hailed as the most significant and beautiful new species discovered in a century, led to search warrants, a grand jury investigation, and criminal charges. It made headlines around the country, cost the gardens hundreds of thousands of dollars in donations, and led to tremendous internal turmoil.

Investigative journalist Craig Pittman unravels this tangled web to shine a spotlight on flaws in the international treaties governing trade in endangered wildlife-which may protect individual plants and animals in shipping but do little to halt the destruction of whole colonies in the wild.

The Scent of Scandal unspools like a riveting mystery novel, stranger than anything in Susan Orlean's The Orchid Thief or the film Adaptation. Pittman shows how some people can become so obsessed-with beauty, with profit, with fame-that they will ignore everything, even the law.

“FANTASTIC. If I did not know most of the main players I would have thought the author had a vivid and twisted imagination..” (Paul Martin Brown, author of Wild Orchids of Florida)
“A fascinating true story of obsession, greed, and lust for the unobtainable. Reminds me a great deal of The Maltese Falcon. This rare flower is definitely the stuff that dreams are made of.” (Ace Atkins, author of Devil's Garden and Infamous)
“Pittman has captured the extreme competition, unique characters, and general insanity that often typify the orchid world. The Scent of Scandal exemplifies how passion and profit can overrule common sense and the law.” (Scott Steward, former associate editor, North American Native Orchid Journal)

What listeners say about The Scent of Scandal

As an avocational horticulturalist, I was shocked at the levels that the "professionals" will stoop to for glory and the almighty buck. If you love orchids, and nature in general, this book will make you sad, angry, and disgusted. Read it anyway, and bocott the scoundrels. Do your research and know where your money is going if you are an orchidist.

I smell a good book!

In the Scent of Scandal, Craig Pittman perfectly balances the craziness of Florida (damn those transplants) the zealotry of protecting and promoting the image of cash soaked and starved nonprofits and those who love and support them and their causes and a little science, just to move the story along.Craig is a great storyteller. His understanding and love (as only a native can) appreciation of all that is Florida and what it does to people coupled with his knowledge of the environmental sector and their unique narrow-mindedness helps explain how this kind of thing could happen and how it shouldn't. Craig makes no judgements which helps keep the story in context and at the same time lets the participants "explain" themselves in their own words, but does not absolve them of responsibility for their actions.The story moves along in an efficient way, no "flowery" language not curtailing the narrative.This is a good book about people getting caught up in their own nonsense, about reaching for greed or fame and about the enforcement of rules and regulations that are sometimes focused on the wrong things.I hope his next book is about pythons.

What did you love best about The Scent of Scandal?

The idea that some people are so into orchids they are willing to ignore rules and risk jail.

The guy who stole the rare orchid and had it named after him; the name could not be changed.

What does Gary D. MacFadden bring to the story that you wouldn’t experience if you just read the book?

A lot of intrigue over a rare plant, bizarre

Great tale about an hour too long

This would have been much better if the last hour or so, the individual legal battles, were condensed. It drug on a bit at the end.