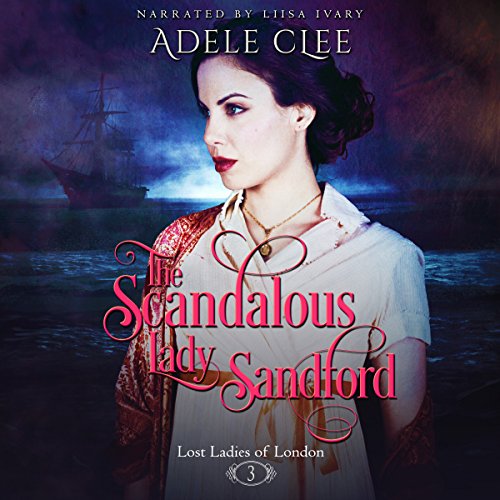 When a lady discovers stars shine even in the blackest sky.

Ruined by a lord purely as a means to exact revenge on her brother, Lady Lillian Sandford has given up all hope of ever finding love. The two years spent abroad did nothing to quell the gossips. And with her brother’s notorious reputation, it’s hard to hide in the shadows. Vane is viciously protective and threatens any man who so much as glances her way.

Only one man has the nerve to defy him. The one they call The Raven.

After inheriting an estate on the verge of bankruptcy, Fabian Darcy, Baron Ravenscroft, made his fortune sailing the high seas. Haunted by the death of his sister, he lives far away from the society he detests, in a castle on an island off the Devonshire coast. But when he receives information that his sister may not have perished in the shipwreck, the search is on to find his missing sibling. Where better to start his investigation than with the scoundrel who ruined her life? But Vane’s refusal to respond to his missive forces Fabian to take drastic action.

Kidnapping Lillian Sandford serves Fabian’s goal on numerous counts. Vane will have no choice but to offer his help. Marrying the chit will prove a fitting retribution. What lady wants to live on a desolate island with a crew of seafaring men? What lady wants a loveless marriage to a rogue?

What listeners say about The Scandalous Lady Sandford

Has become my FAVORITE book!

Mystery, heart-felt emotions, true love, and passion are interspersed throughout the story with humor, danger, suspense, and lots of action, making it an absolute page turner. The HEA is both heart-felt and romantic.

The plot will keep you mesmerized, thrilled, and exhilarated. The characters are the most "human", multi-dimensional, emotion-invoking (of all kinds) I have read.

I cannot over emphasize how much you will enjoy this OUTSTANDING book!

Liisa Ivary narrated and did an admiral job of bringing out the emotion in the book.

I received an Audible copy, and after listening to it (TWICE!), I am pleased to voluntarily give this review with my honest opinion.

This was a great story that grabbed me from the beginning. Lillian has a lot of past to overcome that makes her undesirable as a wife. I loved her strength of character through all her hardships. Fabian has so many layers to his character and I loved finding out each layer. When the two came together the sparks flew. I enjoyed how they parried with one another. The narrator does a wonderful job throughout the book. She captures the moods of the characters and the situations that they find themselves in. I recommend this book to those that love adventures and passionate love scenes.

A pirate and his lady, her brother and the pirate's missing sister combine to make this story a captivating mystery romance.
There are so many exciting twists and turns in this page-turner and because they have been well plotted and cleverly written and equally well narrated, I found myself listening with the thought of "just one more chapter and...", but it became more and more difficult as the story unfolded to get on with the mundane everyday tasks.
I just love it when this happens! To me it means that I am reading or listening to a story that is really worth raving about.
Did I enjoy this story? Most definitely!
Am I happy to recommend it? Again, most definitely!
Should you read it? I think you should.
Why? Well, you might be very pleasantly entertained and that makes it worth your while.
I requested and received a free copy of the audiobook and this is my voluntary and unbiased review.

Each book in this series is better than the one preceding it. This novel has everything ... adventure, mystery, and romance. Lillian is a strong, capable woman who holds her head high against the catty London society. In the face of adversity, she must choose whether to let her guard down or continue to hold her pain inside. As she makes her choice, she finds the other half of her soul, and an undying love. I enjoyed the drama and the sizzling romance this story offers, and look forward to the 4th and final installment of Lost Ladies of London.

Liisa Ivary narrates this tale perfectly! Her accents are spot on, and she takes the listener on a ride full of emotion. She continues to be one of my favorite narrators.

this was a great listen

After a lord's plot to get revenge on her brother saw her thoroughly ruined, Lady Lillian Sandford gave up her hopes of a love match. Spending two years in Italy has done nothing to lessen the gossip she faces on her return to London. That, along with her brother's reputation makes them both notable and Vane's over-protectiveness keeps all gentlemen at bay.

Fabian Darcy, Baron Ravenscoft, inherited a bankrupt estate and managed to earn his own fortune as a seafaring tradesman, better known as the Raven. He is still reeling from his sister's death eight years previously and lives apart from the society he loathes in a grand castle on an island off the coast of Devonshire. When he learns that his sister may still be alive, he immediately commences a search for her. The logical first place to start is with Vane, the scoundrel who ruined her, but when Vane refuses Fabian's request for aide, Fabian resorts to the drastic measure of kidnapping his sister, Lillian.

With Lillian on his island, Vane will be forced to acquiesce to Fabian's request for help and a loveless marriage for Lillian will serve as a fitting punishment for his initial refusal. But the more time Fabian spends with Lillian, the harder it is for him to hid the feelings he's harbored for her since they were children.

I rather loved this story. I'm a complete sucker for the hero who's quietly loved the heroine for years and Fabian didn't disappoint. The pacing was excellent and kept me intrigued and the mystery elements were great. I loved the interactions between Vane and Fabian and now I can't wait for Vane's story. I listened to the audio version of this book and I think the drama of the narration added a little extra oomph to the mystery vibe here.

What a wonderful story about the love and loyalty between brother and sister and hero and heroine!! With a very good narrator ..

Another hit by Ms Clee

Ms Clee has written another hit! Like in all her other books there is love and more than one mystery. The chemistry between H and h is unbelievable. And I thoroughly enjoyed their verbal battles as well as all references to sea and sailing. The story is fast paced and kept me on the edge of my seat until the very end. The narrator did a wonderful job. It's a joy listening to her performance. I highly recommend this book!

An entertaining story, adventure and romance

This was an excellent story to listen to. There was a kidnapping, a few mysterious happenings and the relationship between Fabian and Lillian. I loved the way their affection for each other developed. Also in the background is Vane, Lillian’s powerful and dangerous brother, who is very protective of her. I enjoyed the banter between the staff on the island. The narrator, Leisa Evary is easy to listen to and she uses different voices to bring the characters to life. This is a fast paced story that I enjoyed listening to immensely. I received a copy and have voluntarily reviewed it. All thoughts and opinions are my own.

Full of Heart and Adventure!

Lady Lillian Sandford will never be accepted by polite London society again. Her reputation is ruined by a lord taking revenge on her brother, Vane, and now she has no chance of marrying or finding love. Witnessing Vane's pain and guilt is tearing Lillian apart inside. Although he tries, Vane can't protect Lillian from everything, and she's kidnapped on a visit to Vauxhall Gardens and taken by ship to a remote island.

Fabian Darcy, Lord of Ravenscroft, has been living the life of a pirate after his sister's death and the loss of his family estate. Fabian blames Vane for his losses. When Fabian hears that his sister might still be alive, he asks Vane for help finding her. After Vane refuses, Fabian kidnaps Lillian, and to give Vane an extra incentive to help, Fabian asks Lillian to marry him. When he offers marriage, Lillian glimpses freedom for the first time.

This was a fast paced read with plenty of heart and adventure! It's a mildly steamy read that kept me hooked on each new revelation. I really liked both main characters, Lillian was such a strong and determined heroine, with some major skills. And Fabian never acted domineering or patronizing to Lillian. Of course, Mackenzie was a treat, and I enjoyed the dynamics of the little island.

The narration was done well, with different voices for the characters. It was a great immersive listen. I requested a copy of the audiobook, and I'm voluntarily leaving a review.

A great series. I'm loving it all.

I listened to this book in almost one sitting. I couldn't put it down.

A Regency series wouldn't be the same without at least one pirate and kidnapping story, although this one takes place in a castle on an island rather than on board the pirate ship itself. The author made great use of the setting and was able to weave lots of drama, suspense and intrigue into the story.
Although the romance was initiated by a kidnapping Lillian and Fabian are childhood friends who have feelings for one another. Their romance was quite sweet. Lillian has had quite a tragic past and I liked how Fabian had her best interests at heart even if he initially didn't go about things properly.
Lillian's brother Vane has me completely intrigued. I can't wait to read about him and Estelle in the next book.