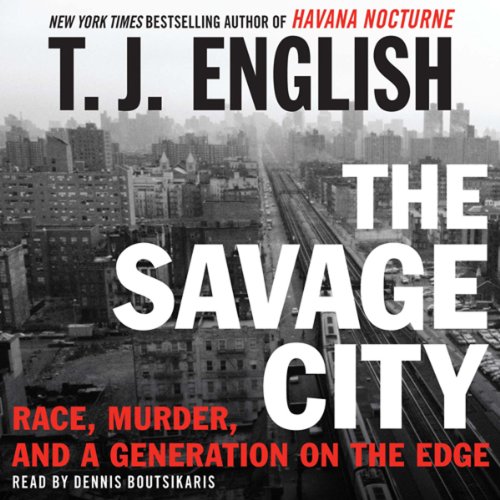 In the early 1960s, uncertainty and menace gripped New York, crystallizing in a poisonous divide between a deeply corrupt, cynical, and racist police force, and an African American community buffeted by economic distress, brutality, and narcotics. On August 28, 1963 - the day Martin Luther King Jr. declared "I have a dream" on the steps of the Lincoln Memorial - two young white women were murdered in their Manhattan apartment. Dubbed the Career Girls Murders case, the crime sent ripples of fear throughout the city, as police scrambled fruitlessly for months to find the killer. But it also marked the start of a 10-year saga of fear, racial violence, and turmoil in the city.

The Savage City explores this pivotal and traumatic decade through the stories of three very different men:

The Savage City emerges as an epic narrative of injustice and defiance, revealing for the first time the gripping story of how a great city, marred by fear and hatred, struggled for its soul in a time of sweeping social, political, and economic change.

What listeners say about The Savage City

I Highly Recommend This Book!

I downloaded this audible as the author was an Poe nominee. I found the first 3 pages harsh and wondered if the remainder of the book would be from the perspective of an admitted racist police officer. I was glad to listen on and found the author's writing honest and accurate in the description of the events. I found the author's and narrator's transition from one viewpoint to another an excellent style of writing/reading. I was eager to hit play when I had time to listen to this book. I completed this one in record time.

A very skillfully constructed account of race and change in New York City in the 60s and 70s. Weaving the stories of the three men together, the author paints a picture of sometimes dramatic, sometimes rather mundane, examples of institutional racism. The most compelling part is how casual bigotry was, and is still to a large degree, understood and accepted as a natural way of life. It's not all overtly racist cops (though they do feature), but a general apathy to affect real change. It seems insane that even now, a half century later, it's still an uphill fight to have effective civilian oversight of the police. At least oversight that actually has teeth. The book should be a shocking expose of long gone era, but unfortunately, it hasn't really improved all that much.

Deep Look into NYC Division in the earlier days.

The audiobook was good! It educated me on other cases, books and other events which led me to more learning and research about New York City in the earlier days.