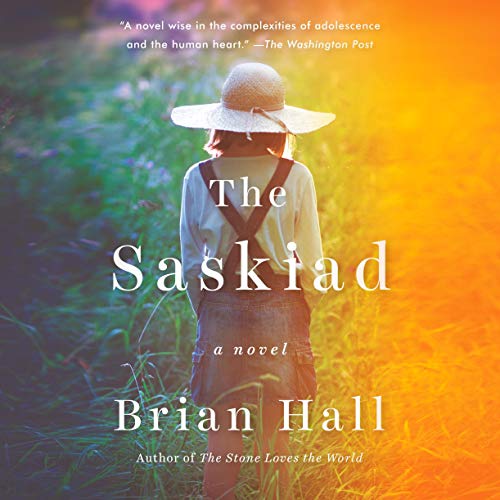 By: Brian Hall
Narrated by: Saskia Maarleveld
Try for $0.00

"A novel wise in the complexities of adolescence and the human heart." (The Washington Post)

Longing to escape the rundown commune outside of Ithaca, New York, where she lives with her organic-farmer mother, assorted half-siblings, and a cow named Marilyn, the precociously well-read Saskia White, 12, imagines herself as the noble contemporary of Odysseus, Marco Polo, and Horatio Hornblower. But Saskia's elaborate fantasies are soon upstaged by her real-life, long-lost father, who leads Saskia and her best friend, Jane, on a camping trip that turns into an epic adventure of love, sex, and lies.

Saskia is as unforgettable as her own heroes, a young girl whose story resonates with a rare and joyous sense of life and discovery.

“Beautiful...Saskia speaks in a pastiche of received languages, most of them - like the shards of the Odyssey that crop up everywhere - grandiose, stilted, and unexpectedly lovely.” (The New Yorker)

“Some books open at the touch like an enchanted door. So it is with The Saskiad, [an] inspired coming-of-age story.” (The Washington Post)

“Spectacularly inventive...[The Saskiad] uses the legacy of one generation to examine the power of history and the lure of the myths that shape us all." (Glamour)

What listeners say about The Saskiad