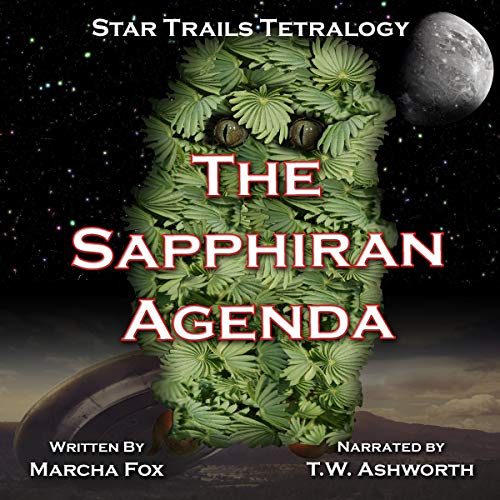 Thyron is a flora peda telepathis from the planet Sapphira. His world is occupied by his species of telepathic walking plants as well as a race of cannibalistic pygmies who worship them as gods. Encounters with humans generally don't end well. Face it, humans are omnivorous and plants a popular source of nourishment. Attempt this on Sapphira, however, and the food chain is likely to change rather abruptly.

If you like quirky science fiction and you're a fan of Groot, Audrey, or even ALF, this is the story for you! If you've listened to Beyond the Hidden Sky, you've already met the Sapphirans as well as Thyron and experienced his botanical wisdom. This short story is a prequel to his adventures in The Star Trails Tetralogy.

What listeners say about The Sapphiran Agenda (Star Trails Tetralogy)

Perfect for the ride to work!

This is a fairly short sci-fi story. It originated from one of my favorite series the Star Trails Tetralogy. In this story the listener is introduced to another side of Thyron -- a plant who thinks, speaks telepathically and is mobile. I'm a high school biology teacher with a love for anything biology related and the idea of a plant that is smarter than most humans is a riot. I adore his personality too.

He lives on a planet with Sapphirians. A civilization that is carnivorous therefore not iterested in herbs and plants. Sapphirians aren't very clever which leads to Thyron ending up on a space ship with a teenaged girl and robot. The story takes place from Thyron's point of view as a plant, adding rich humor.

Its a quick story and perfect for the ride to work or waiting in doctors office. Its extrememly entertaining and the author does a fantastic job at building the sci-fi world into something completely plausible and sticking to the rules.

Its perfect for any age and is a nice compliment to the series which I think it can be read or listened to without reading the series first. You may want to read it after though. The narrator adds depth to the book as well with his character voices and synced timing and rcadence.

Sci-fi lovers need to check this one out!

I have read the entire Star Trails Tetralogy, but this is the first time I have listened to an audiobook. What I love about all of Marcha Fox's Star Trails books is the SCIENCE content in the sci-fi story. The narrator did an excellent job with all of the terminology and the voices. Treat yourself to a listen!