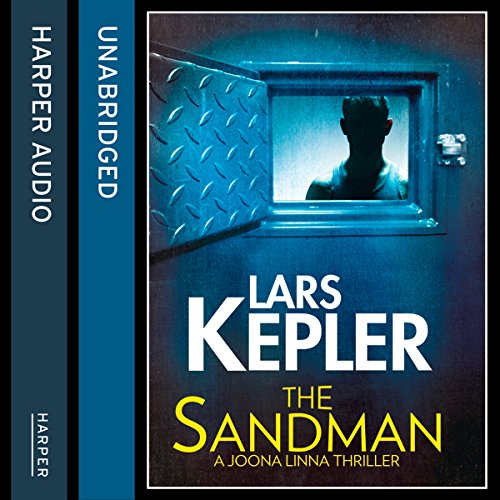 The number-one Swedish thriller by the author of The Hypnotist and The Fire Witness. He's Sweden's most prolific serial killer. Jurek Walter is serving a life sentence. Kept in solitary confinement, he is still considered extremely dangerous by psychiatric staff.

He'll lull you into a sense of calm.

Mikael knows him as The Sandman. Seven years ago, he was taken from his bed along with his sister. They are both presumed dead. He has one target left. When Mikael is discovered on a railway line, close to death, the hunt begins for his sister. To get to the truth, Detective Inspector Joona Linna will need to get closer than ever to the man who stripped him of a family; the man who wants Linna dead.

"Taking Europe by storm…ferocious, visceral storytelling that wraps you in a cloak of darkness." ( Daily Mail)
"Deeply scarifying stuff." ( Independent)
"Kepler has a direct line to a very dark place in the human soul." (Lev Grossman, Time)

What listeners say about The Sandman

Well, if I had been physically reading it instead of listening to it it would have been! Nearly listened the whole night through, was so exciting, and atmospheric, which is what I particularly like about Nordic Noir. This is my first Lars Kepler, who I understand is a husband and wife team, after being used to the calmer waters of Henning Mankell and the lovely Wallender. Quite different but equally as good. Would highly recommend, but please note it is the last in a series of Joona Linna books, so try and find one of the others first, annoying coming in at the end of a series :)

Saul Reichlin is a master of foreign-language thriller audio, and he's used to really scary effect in this Scandi-horror with a kick-ass heroine and an even more kick-ass hero. The villain is the most frightening yet in the series. Must-listen

Lars kelper is fast becoming one of my fave authors, the detailed descriptions in his book could easily of been too much but he manages to use them to enhance the tone of the novel - this was a fantastic book with lots of surprises I would highly recommend it on audible as the reader is amazing

Would you consider the audio edition of The Sandman to be better than the print version?

Which character – as performed by Saul Reichlin – was your favourite?

The policeman was the central character for me

Couldn't stop listening - totally mesmerised by such an original storyline.

The most fantastic story, characters , and narration

I really enjoyed this book!

I enjoyed the story, it kept my interest & when I needed to rewind, when I was interrupted, the rewinds were short.

Who did it? Who were they? What really happened? What was going to happen? All great for making you read on!

Good book from Lars, not his best

Another good thriller from Lars, wouldn't say its his best, it is slow at times which isn't expected in a Kepler book. I did enjoy the read and the story was very interesting and nice to know more back ground into his other books. Would recommend if you've read the others, if not then start at the beginning of his books first!

Just as it was when I was listening to the Millennium series, with Lisbet Sallender (not sure of the spelling), I was enthralled by the Juna Linna series. This was a great continuation, and I look forward to listening to the next one.

Thrilling to the end, in my top 5 of all time

On the edge of my seat for the end of the audiobook (was driving!). Great story, great performance. One of my all time favourites, and more to come!

This is a nerve shredder!

I enjoyed this from start to finish, the story moved well and held my attention to the end. Perhaps a little far fetched in places but didn't matter as I was immersed in this story.

Plenty of suspense, surprises and action set in a really gloomy world..

Performance was impeccable, well read and a good pace.