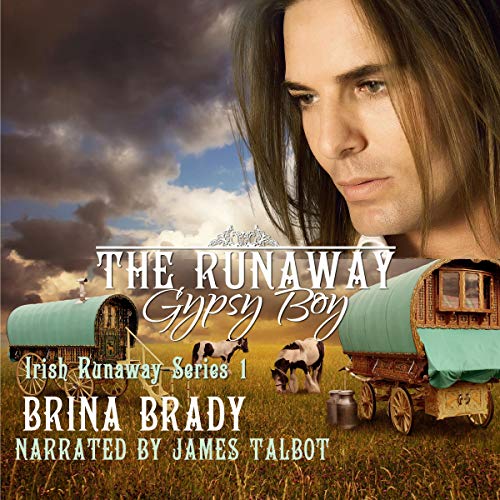 By: Brina Brady
Narrated by: James Talbot
Try for $0.00

Twenty-year-old Daniel Serban loses his dancing job and threats of being outed to his family force him to flee Limerick, Ireland. Daniel fears his father and the other gypsy men will force him to marry his betrothed, or bring bodily harm to him for being gay.

As chance would have it, he ends up in Cleary’s Pub, a gay leather bar in Galway where he meets the grouchy, ginger-bear Ronan O’Riley. Daniel had no idea how much meeting the Dom would transform his life.

Ronan O’Riley has been unable to move on since the death of his sub a year ago - that is, until a troubled gypsy boy steps into Cleary’s. Ronan’s lonely existence is about to change.

Can Ronan convince Daniel to trust him or will Daniel’s fears of his past ruin any chance of a relationship? Unexpected heated attraction in the barn ignites their relationship to move forward. Though the two men have many of the same dreams, Daniel’s secrets and Ronan’s need to gain Daniel’s trust are just a few of the many challenges they must overcome if they are to be together.

What listeners say about The Runaway Gypsy Boy

Loved this Narration and Story

I loved this narrator as he was a first time listening to him with this audio. Fantastic, voiced as the characters played their scenes with a small difference to characters voices used. I absolutely loved reading this book and audio just brought it to life.

The characters where gorgeous together. Ronan fell for Daniel as soon as he saw him. But Daniel is running for him past that may bring more heartache to him. Ronan felt empty before Daniel stepped in the door. Can they be together, safe from danger that haunts them.

My heart went out to Daniel. He had went through hell through the hands of a sadistic father Able. When Daniel got fired from his job and his boss threatened to tell Daniel's dad that his son works as a stripper in a gay club that's when Daniel decided to leave and get far away from his dad. Daniel came across a pub when he stepped in the pub he noticed that everyone in there were men Wearing nothing but leather. The moment Daniel walked in Ronan knew he had to make Daniel his. Will Daniel a Ronan get the relationship they want or will Able destroy everything Daniel and Ronan are working to achieve . You need to read for yourself .

Very enjoyable to listen too!

First time I've listen too or read any of Brina Brady's books and I will definitely be buying more.

I just loved this book so much. The story of Ronan and Daniel is so great. The way James Talbot brings them to life and his Irish Accent make this something to listen to over and over. I can't wait to hear the rest of the series. Another great book from Brina Brady. Just love her books.

I loved this book. James Talbot really brings this book to life with his voice and makes you fall in love with the characters even more. Daniel works as a painter and dances at night. But once his employer find out who his Da is he fires him and threatens to tell his Da what Daniel is gay and about his job. In fear Daniel flees and ends up in Master Cleary's Pub a gay leather bar in Galway. He meets a man named Ronan O’Riley and grouchy Dom. Ronan lost his sub a year before and cant move on until he saw the young gypsy boy. Can Ronan gain Daniel's trust? Can they both find love with each other?

The story of Daniel and Ronan is a story about love, but this is definitely not an insta-love story. The two men are instantly attracted to each other, yes but they are both dealing with fear and pain that isn't easy to overcome. Daniel is fleeing a family he fears to come out to and Ronan is still dealing with the grief of losing his sub. I loved the patience Ronan learned he would have to show to earn Daniel's trust and the way Daniel learned to accept love and give his trust. Brina Brady always does an excellent job with stories set in Ireland. We get the flavor of the country and how its LGBTQ and Romany/Traveller citizens are treated. James Talbot did a wonderful job potraying the characters' emotional development as they move from attracted acquaintances to lovers and a healthy D/s relationship.

Finally Able To Be Himself.

Daniel had spent his entire life travelling with the other Romany Gypsies that his Da was King of, but he was determined to escape and his time was running out as he would turn twenty-one in two months. He had secrets and if his Da found out he would kill him!.
Very emotional story with some triggers, Abuse, Murder, amongst them but I was really caught up in Daniels story and was cheering him on throughout James Talbot's Narration.

OMG I need more of this series

OMG I need more of this series

What a great book, loved the story, loved the characters and I didn't mind the narration.
The accents were good, just a tad bit slow for me.

Daniel ran away from his gypsy family as he was gay and his life was one big secret.

Ronan had lost his last sub a year ago and meets Daniel in Cleary's pub, but Daniels not interested.

this author did it again. I love listening to her books and the narrators she picks are spot on.