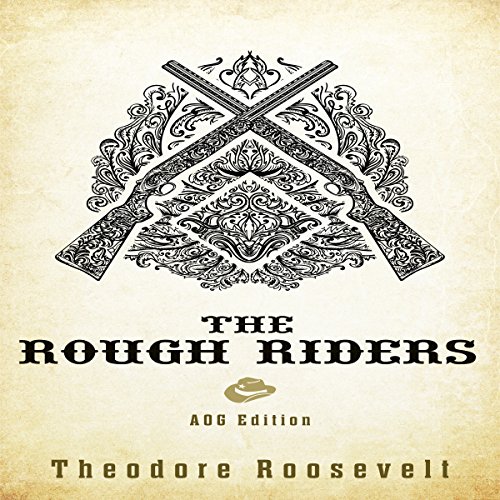 By: Theodore Roosevelt
Narrated by: C.J. McAllister
Try for $0.00

Before Theodore Roosevelt - or "Teddy," as he is more commonly known - became the 26th president of the United States, he served as the Lieutenant Colonel of the 1st United States Volunteer Cavalry, nicknamed the "Rough Riders", during the Spanish-American War. This fascinating audiobook is his first-hand account of his experiences during this campaign. In addition to providing an intriguing perspective on the battles in which the Rough Riders participated, along with their lead-up and aftermath, Roosevelt shares unique insights on leadership, dealing with red tape, and many other situations that are all too familiar to individuals in positions of responsibility, making this an incredibly useful and applicable audiobook even for modern listeners from a wide variety of backgrounds.

What listeners say about The Rough Riders: AOG Annotated Edition

It was fun listening to "Teddy" tell the story!

I don't know if I would have liked reading this book. I really enjoyed listening to it though!

I love history and am always a fan of first hand accounts. Historians writing their researched and annotated histories are all well and good but nothing beats the color that comes with a first hand account from someone who was there. This edition was made for the classroom and comes with questions at the end of each chapter to make one reflect back and analyze on what was just read/listened to. Well written and well narrated. I was voluntarily provided this free review copy audiobook by the author, narrator or publisher

Teddy Roosevelt was always my favorite president, and this is a phenomenal background to his life story. I very much enjoyed the story of Roosevelt's earlier days.

The narration is clear and easy to understand, and the narrator didn't get in the way of the story at all. All around, a well-told story.

I’m surprised at some of the things this man did. To the point that couldn’t believe he was an actually person. Granted I’m sure there is an embellish overall I believed he was one of our more interesting presidents

The Rough Riders: AOG Annotated Edition was a good read by Theodore Roosevelt. This edition of "The Rough Riders" includes the full text of Roosevelt’s original work, along with supplemental study and discussion materials after each chapter. Before becoming president of the United States, Teddy Roosevelt was the Lieutenant Colonel of the 1st United States Volunteer Cavalry during they Spanish-American War. They were also known as “Rough Riders”. This is his first hand account of his experiences during the war. He shares insights on leadership and dealing with red tape. I enjoyed reading this book and can’t wait to read more by the author.

If you've never heard about the Rough Riders before, you definitely want to listen to this one. I myself knew very little about them, and was glad to have the opportunity to learn more about them, especially told by Teddy Roosevelt himself, the 26th President of the United States of America. Go USA!

Very interesting information about this regiment, a volunteer cavalry regiment known as the Rough Riders. Roosevelt served as the Lieutenant Colonel of this group, the 1st United States Voluntary Cavalry, during the time of the Spanish-American war. It goes into the the battles they participated in, before & after, all the good stuff you'd want to know.

Very educational and I loved listening to it!
I was given this free review copy audiobook at my request and have voluntarily left this review.
Please take a moment to click the "YES" ("Helpful") button below if you found this review helpful :) Thank you!

A piece of history

The Rough Riders: AOG Annotated Edition. It is a piece of history told by a amn who later became President. The story/history of the "Rough Riders" a volunteer cavalry regiment, hastily formed in time for action in the Spanish war. It is primarily about the men of the regiment and their part in Cuba. But in reality his writings unwittingly tell more of the man and his character.
After listening to this account I'm beginning to think it would be a good thing if all presidents had served as military officers.
C.J McAllister's narration is great - calm & clear, I've listened to a few of his works and he always reminds me of John Wayne, in his tone and cadence.
I was given a free copy of this audiobook at my own request, and voluntarily leave this review.

Great depiction of the Rough Riders

After each chapter there are discussion questions to go over. I listened to this book for my own edification so while the discussion questions seemed great for a student/ teacher, I could have skipped over them.
The narrator did a good job. He has a nice slow cadence, though his inflections were pretty rare. If you are a person that likes a faster paced reader, this can be rectified by putting the play speed to 1.1 or 1.25.

Overall, this was a very educational and entertaining book. I recommend it for any Teddy lovers.

Lots of interesting history here from a colorful character. They don't make them like this anymore.
Well narrated by C.J. McAllister. He does a great job keeping the flow of the story going.
I was given this free audiobook at my request and have voluntarily left this review.

I had heard about Roosevelt's Rough Riders before, but I was vague on any details. (I knew they were led by Teddy Roosevelt, and if pressed I might have been able to pick out the correct war the fought in.) Actually, the same could be said about my knowledge of the Spanish-American War in general. I had previously listened to the audiobook of Roosevelt's much earlier history "The Naval War of 1812". It was quite detailed and very extensive, and apparently is regarded as one of the top naval history books, even though that war was fought 40 years before Roosevelt was even born. I learned a lot about the naval battles of that war, so I was excited to see this new Audiobook of "The Rough Riders", which was about the war he actually fought in.

I think this book is a fascinating insight into his thoughts and worldview regarding his soldiers and fighting. He starts with the formation of his regiment, going into details of the lives of many of his men, and why they wanted to serve in a regiment that was almost guaranteed to see hard fighting. He tells about their training, transportation, and the few battles they were involved in. He finished up with his efforts to get his regiment out of Cuba after the war was over, and then how some of his men fared after the war. There are even several appendices of letters he discussed in the book. If what all that Roosevelt writes is true (and I have no reason to believe it isn't true, especially since this book was originally published less than a year after the Rough Riders were disbanded at the end of the war) then Roosevelt's reputation as a "man's man" and all-around tough guy (but not in a mean way) is well-deserved. But his strict leadership and high expectations for his men to endure hardships was balanced by genuine concern for them and strenuous advocacy for their well-being to his superiors.

I thought the story was very interesting, and, at least for me, very educational, since I was pretty ignorant of the exploits of the Rough Riders. It wasn't a very long book, but packed with details.

I listened to this book for my own enjoyment and edification, so the discussion questions that followed each chapter weren't really applicable to me. But I will say, they are truly questions to promote discussion, and are never simple factual questions that just make sure you actually read the book. So they could be useful in a classroom or book club setting. There are maybe six or sever questions following each chapter. Some are along the lines of "what did Roosevelt mean when he wrote such-and-such?" or "what do you think was the reason for this view?", etc. They seem to be good thought provokers, but for some of the questions you'll need to have a good idea of the social and historical issues of the period to be able to answer or intelligently discuss them.

The narration of this book was a bit strange. As other reviewers have said, the narrator had very clear diction and was very easy to understand. He read at what I regard as a much too slow a pace, but speed of narration isn't a problem, since the Audible app gives you plenty of control over playback speed. I was comfortable listening to this book at 1.30x and 1.35x speed. You can adjust to your taste. However, there were several times where the rhythm of the reader's narration was strange. He'd sometimes emphasize or draw out certain words that didn't seem natural, almost to the point of making it sound automated in some way. There aren't very many direct quotes or dialog in this book, but when there is, the narrator's delivery is much more natural and not quite as slow. It didn't really hinder my experience of the book very much, but picky listeners (I'm sure you know who you are!) should absolutely listen to the full sample audio before buying to see if it's your cup of tea. I have no expertise in this area, but I wonder if it's possible that this slower and more deliberate delivery could be helpful for someone who speaks English as a second language.

All in all, I enjoyed this book and am glad I listened to it.

Disclaimer: This audiobook was given to me for free at my request and I provided this voluntary review. I have done my best to keep this review completely unbiased.