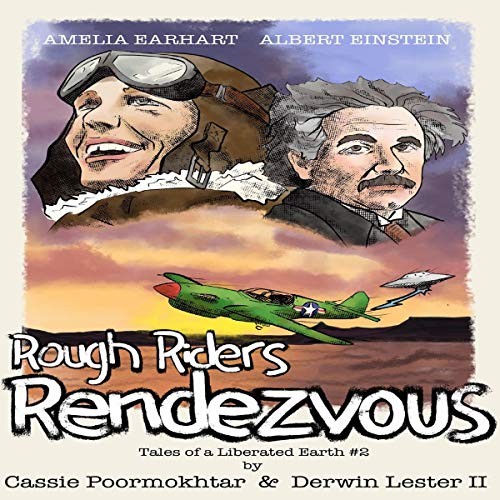 For 30 years, the Amphibite Empire has ruled Earth. To disagree with them is to die.

Amelia Earhart was used to all the death. For 20 years, she served the empire in the Human Soldiers of Earth. After the mushroom clouds destroyed Tehran, she grew tired of killing humans for the empire. Now she kill humans for the Rough Riders.

She received a mission from the Rough Rider commander, Escort Albert Einstein, pride of the upper caste and tool of the empire, from Paris to the South Pacific. All she had to do was avoid the combined might of the Human Soldiers of Earth searching for the loudest fugitive in existence. Shouldn't be a problem.

What listeners say about The Rough Rider Rendezvous

This is a good little short story, the prequel to Tales Of A Liberated Earth, it has Albert Einstein, Winston Churchill, Charles Lindbergh, and some other historical characters. The narrating done by Rachael Reading was solid. I received this audiobook for free through AU and I am giving my voluntary review.

This is the perfect start to The Liberation of Earth series. It gets things going while leaving room to expand on the adventure.

I love how he is able to capture the truly awkward nature of such a historical figure.

Rough Rider Rendezvous is the second short story set in the Liberated Earth universe and is very much an alternate history set just twenty five years after the alien invasion of earth. Amelia Earhart, flying ace, has agreed to one last favour for Winston Churchill. Additionally, we meet Albert Einstein and Lindberg. It's fun writing, visual action. Narration by Rachael Reading is excellent. Her voice matches this reader's perception of Amelia perfectly, and is warm, yet forceful and resonant, well modulated and expressive.
This book was a free download, at my request, from Audiobooks Unleashed. Thank you