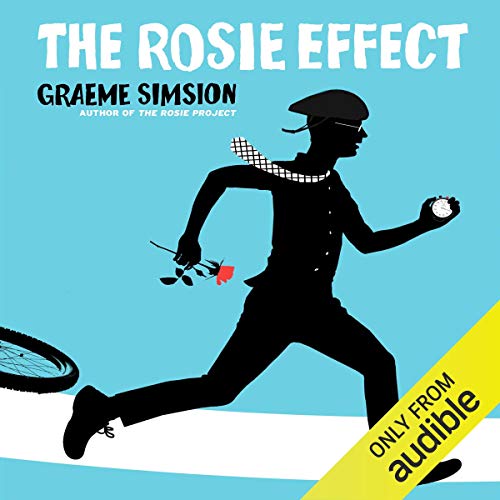 By: Graeme Simsion
Narrated by: Dan O'Grady
Try for $0.00

The Rosie Effect is the charming and hilarious sequel to Graeme Simsion's best-selling debut novel, The Rosie Project.

With the Wife Project complete, Don settles into a new job and married life in New York. But it's not long before certain events are taken out of his control and it's time to embark on a new project....

As Don tries to get to grips with the requirements of starting a family, his unusual research style gets him into trouble. To make matters worse, Don has invited his closest friend to stay with them, but Gene is not exactly the best model for marital happiness. As Don's life with Rosie continues to be unpredictable, he needs to remember that emotional support is just as important as practical expertise.

Join Don and Rosie in the next chapter of their weird and wonderful journey in Graeme Simsion's unmissable new novel, The Rosie Effect.

"Warm-hearted and perfectly pitched, with profound themes that are worn lightly, this very enjoyable read promises to put Don Tillman on the comic literary map somewhere between Mr Pooter and Adrian Mole." ( Guardian)
"Funny, endearing, and pure, wonderful escapism." ( Independent)
"Don Tillman is one of the most endearing, charming and fascinating literary characters I have met in a long time." ( The Times)

What listeners say about The Rosie Effect

If you could sum up The Rosie Effect in three words, what would they be?

What does Dan O'Grady bring to the story that you wouldn’t experience if you just read the book?

He brings to wonderful deadpan life the voice of an esteemed Geneticist with Aspergers, living in a world that doesn't always make sense to him but who is so sincere and so well educated and so well intentioned that he is instantly loveable.

I laughed out loud many, many times reading this. As someone with an autistic teenager in the family, it was an acute and tender observation of this social 'disability' that was sweet and hilariously accurate.

Highly recommend both books in this series to anyone who needs a laugh. That it offers acute insight into Aspergers is a bonus.

The Rosie Effect follows on from The Rosie Project, and as I enjoyed the latter very much, I didn't wait too long to listen to the second book. I am still undecided about how much I liked The Rosie Effect. Like the first book I chose to listen to the audio version because Dan O'Grady totally nails the narration. To me he is the voice of Don Tillman! His voice, his phrasing and emphasis on certain words just brings this story so alive.

Don is totally thrown when he learns that he and Rosie are expecting a baby. He goes into meltdown. And when he has finished with that he turns to the practicalities of preparing a baby. He becomes an expert on the total nine months and all birthing possibilities. You don't want to know his version of a pram and cot. Neither would Rosie. What Don neglects to do is give Rosie the support she needs and fails to be involved in ways that Rosie sees as essential.

I wasn't that keen on the relationship between Don and Rosie in this book, except perhaps towards the end. The decision that Rosie came to in the course of events was something I felt might be inevitable. Rosie felt like a shadowy character in this book, she was there in the background, but not really fully fleshed.

Don had a number of other characters to relate to in this book. They are in New York and there is the old rock star upstairs - George, Dave and Sonia - someone Don helps out with his business and then Sonia later helps Don out in a very funny kind of way. Then there is Lydia, he first meets her in a restaurant and then later as his 'social worker'. Gene also turns up on the door, I found I didn't mind him so much in this book.

Don because of who he is lands himself in all kinds of funny situations that he takes totally seriously. He also shows the kind of person he is as he bends over backwards for his friends - he just forgot to do that for Rosie in a way that she needed!

I enjoyed the reference to the media and the way some journalists muddle the facts and the poking of fun at the way airports operate these days.

If you listen to audio, I would most definitely listen to it rather than read it. Dan O'Grady takes the book up some notches.

I would be expected by social convention to open this review by saying that The Rosie Effect is the best comedy novel EVER. This is not true. A statistically significant survey of a group of literate Australians indicates that The Rosie Project and The Rosie Effect are perceived as equally inducing an extreme humour response. This result was further verified by a self-administered psychological profile checklist to ascertain that the respondents to the original survey did not illustrate a bias towards Asperger's-like behaviours. The genetically-based human tendency towards repeating patterns suggests that a third Rosie comedy novel would have a similar effect.

I think I preferred the first book (The Rosie Project), but still thoroughly enjoyed this book. Light hearted and an easy listen but still made you think. I would recommend both books in the series.

I can’t wait for these books to become a movie. Great concept and a humorous listen. Looking forward to the third book.

I really enjoyed listening to The Rosie Project and was looking forward to this book. It was just as good as the first, if not better. A brilliant read!

Couldn't stop listening.
A hazard when driving due to uncontrollable outbursts of laughter !
Wonderful writing that evokes all the emotions in one!

Great follow up book! Really enjoyed the whole story. This book keeps you laughing and wishing for a happy ending.

This is just one of those boom that I wi listen to again and again. It's flawless. Serious! Love love

What a horrible person rosie turns out to be.

Hate rosie in this book, tricks him into getting pregnant then doesn't ask for or tell him anything to do with the pregnancy and just keeps calling it her baby and she decides to do whatever she wants with her baby. Very unlikable character.

had this book in my wish list for a while not knowing if it would live up to the first book, im glad I decided to get it as it was great and expanded on an already great story.

If you loved the Rosie Project, you will love this book too. The story continues...

Not as good as Book 1

I didn't enjoy this book as much as the first. I understand that Don isn't a great communicator and Rosie has trust issues but it was just too frustrating 'watching' their marriage drift apart because they weren't talking to each other properly. The whole book I just wanted to scream at them 'Just talk to each other!!'. Yep, not a fan and I won't be listening to book 3.