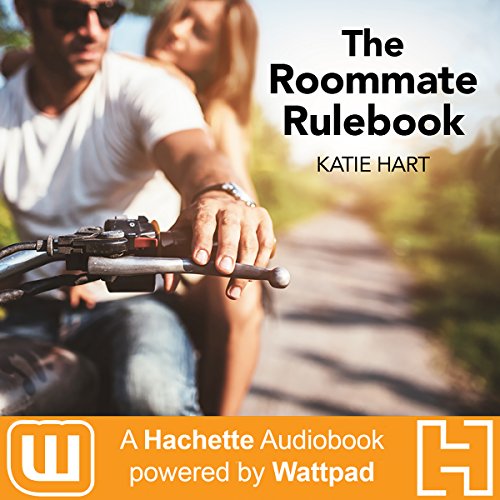 By: Katie Hart
Narrated by: Charlotte Wright
Try for $0.00

The Roommate Rulebook is a new release from Hachette Audiobooks. Powered by Wattpad - an innovative collaboration between Hachette Book Group, a leading publisher, and Wattpad, a passionate storytelling community of over 45 million people. Your favorite online stories, now available in your headphones!

Alex Simmons moves into her cousin Dev's flat by the agreement of her parents that she will attend the local business college. However, with Alex's passion for art and desire to make her own way in the world, this becomes an impossibility. After gaining the approval of her cousin, she skips her college classes and gets a bartending job at her local pub.

Through her cousin she meets his best friend, local biking legend Asher Toms. With his irritating idiosyncrasies making her life difficult, she decides to formulate her own rulebook, filled with rules that aim to contain Ash's unruly behavior. Breaking these rules soon become Ash's goal, which result in endless pranks, petty squabbles, and eventually a budding romance.

Ash's aim is to win the local biking championships. At one of his races, his bike is sabotaged, followed by a warning not to continue his biking career. Ash, Dev, and Alex set out to uncover the culprit before the date of the championships. At work Alex becomes closer with her colleagues and eventually becomes suspicious of their behavior. When she has satisfied her curiosity, Ash discovers that somebody took his bike to the garage while masquerading as him. Alex decides to try to get to the bottom of it but doesn't come to any conclusions.

The championships draw closer, and Asher becomes increasingly threatened but refuses to give up riding in the race. Alex discovers that his father was in a biking accident and resides in the hospital's life-support ward, which is the true reason that Asher will not halt his career.

After a horrible crash at the championships, Ash is taken into the hospital, where the identity of his stalker (one of Alex's colleagues) is unveiled. Asher's father wakes up from his coma, the stalker is arrested, and Ash survives his surgery.

What listeners say about The Roommate Rulebook