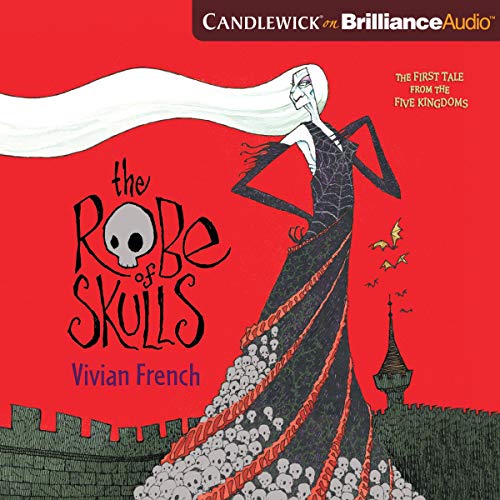 The Robe of Skulls

The Robe of Skulls

Trouble is brewing in the first book of the Tales from the Five Kingdoms series. The sorceress Lady Lamorna wants a skull-studded gown of deep black velvet but finds her treasure chest empty of gold. That doesn't stop her from kidnapping, blackmailing, and using more than a little magic to get what she needs.

Will all her best-laid plans be foiled by the heroic Gracie Gillypot, two chatty bats, a gallant (if rather scruffy) prince, the wickedest stepsister ever, a troll with a grudge, and some very Ancient Crones?

Fun for more than just the kidlets

I confess, Ms. Raudman is one of my all time favorite narrators. She does an excellent job of giving each character their own voice, her speaking voice is fun to listen to, and her pacing and diction are top notch. In fact, I came upon this book when looking for more tales narrated by Ms. Raudman. :)

Story-wise, this was a fun romp pulling in some new takes on classical fairy tale memes like the Wise Animals, Heroic Princes, and Evil Step Families. It resonates well with that genre while also being fairly novel.