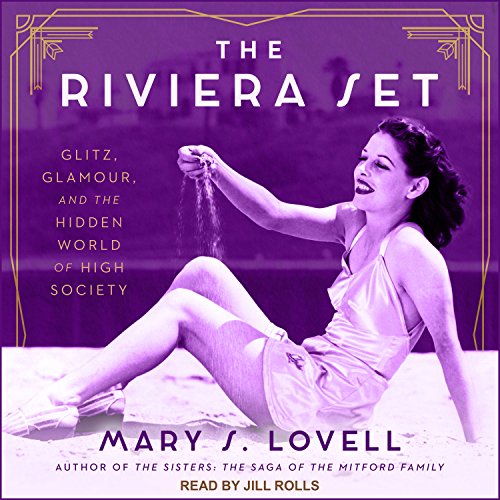 The Riviera Set reveals the story of the group of people who lived, partied, bed-hopped, and politicked at the Château de l'Horizon near Cannes, over the course of 40 years from the time when Coco Chanel made southern French tans fashionable in the twenties to the death of the playboy Prince Aly Khan in 1960.

At the heart of dynamic group was the amazing Maxine Elliott, the daughter of a fisherman from Connecticut, who built the beautiful art deco Château and brought together the likes of Noel Coward, the Aga Khan, the Duke and Duchess of Windsor, and two very saucy courtesans, Doris Castlerosse and Daisy Fellowes, who set out to be dangerous distractions to Winston Churchill as he worked on his journalism and biographies during his "wilderness years" in the 30s. After the War the story continued as the Château changed hands and Prince Aly Khan used it to entertain the Hollywood set, as well as launch his seduction of and eventual marriage to Rita Hayworth.

Bringing a bygone era back to life, Mary Lovell cements her spot as one of our top social historians in this captivating and evocative new book.

What listeners say about The Riviera Set

I was disappointed in the narrator. Her reading was not very inspirational and the fact that she could not keep track of pronunciations, for example Mrs. Churchill's first name was occasionally Clementine, and other times Clementeen, was distracting to say the least.

informative and interesting read. A lot of time was focused however on Winston Churchills presence

Fizzled half way thru

I thought the First half of the book was interesting, second half not so much.

Enjoyed listening to this very much! Part history, part how the rich lived in the 30's and 40's, the jet set crowd at Chateau L'Horizon and its history. Well worth the listen. Great narration too! Deserves the 5 stars all around!

it's interesting how some "dynasties" live off taxpayer money. also how all "world leaders" seem to be "in bed" with one another.