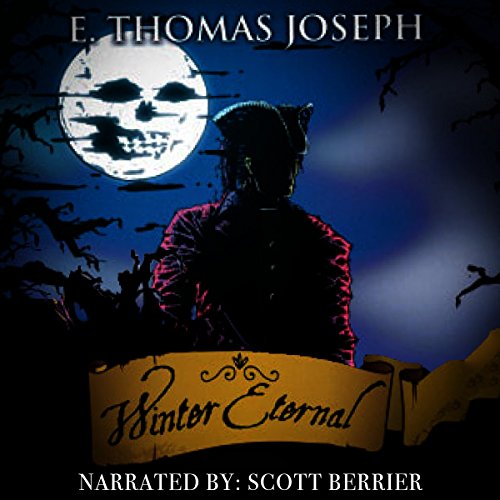 The River That Flows Both Ways

The River That Flows Both Ways

By: E. Thomas Joseph
Narrated by: Scott Berrier
Free with a 30-day trial

In 1777, Captain Isaac Pearson joined the British Army when he believed the Colonial Rebellion would be dispatched with effortless haste. Taking a few American lives was an agreeable price for the pampered aristocrat who believed his actions in the conflict would afford him honor and glory. Yet, the path Captain Pearson rode was neither honorable or glorious and the price he would pay was beyond his imaginable fortunes.

Time is the enemy of all, the hunter of the hunters whom no measures of tenacity or weaponry can defeat. Yet, in the early days of America's war for independence Phantom Regiments, ruthless shadow units, British Redcoats, American militia, and crazed men of the occult race to acquire a mysterious Iroquoian artifact which offers the capacity to defeat time. Set in New York's Hudson Valley, the contest for time will marshal tragic desperation and horrific ends.

Winter Eternal, uncovered from layers of dust, deep within the archives of America's untold history, are the tales of the soldiers and the citizens who sell their souls to pursue the mysterious Native talisman, the Kahontsi Ehnita: the Giver of Life. A revolutionary war has begun.

What listeners say about The River That Flows Both Ways

As a revolutionary war buff who has read many books on the subject, I am glad I listened to this one. I probably would have enjoyed reading this book, but I loved listening to it! The narrator, Scott Berrier, really brought this story to life!

I wasn't sure what to expect but really enjoyed listening, it was a clever blend of history and fantasy. The story is mostly told from the British perspective during the Revolutionary War. It starts at a turning point in the war when the Americans are beginning to get the upper hand. The British Army is becoming desperate and this is really where the story begins. The book mixes in political philosophy about the merits of American independence and cynical observations of the human condition. At times it can be violent and some of the characters are crude in demeanor, but for me, the elements of bloodshed and foul language were fitting given the context of the war and unseemingly persons involved in fighting it. The narrator has a calming voice and does a great job of portraying a diverse set of interesting, likable and hateable characters. I recommend it. In my opinion, one small part dragged a tiny bit and one other part missed its mark, but overall, I found it smart and entertaining. It reeled me in, the action passages were wild, I chuckled a few times and thought it had some cool moments. If you pay attention you might be able to note themes and clues, which were cleverly weaved into the story. Listening to the book peaked my interest in the American Revolution and I was surprised that some of the characters and events are true to history. I'm looking forward to the second part.

A very enjoyable audiobook about the American Revolution but this time from the point of view of the British, which made it very interesting. This novel will make you gasp, chuckle and shake your head. Worth the listening too.

Not so much paranormal

This was definitely an interesting twist on the American Revolutionary war. The author provided a suspensefully dark story following a couple of characters. While this is listed as paranormal I was a little disappointed in the amount of paranormal that was actually in the book. I felt like this could have been utilized better to really enhance the story. The timeline and pace of the book were done very well but be warned that it is a little vulgar. Personally, I'm not a fan of scenes like these but felt like it should be addressed - this did not affect my rating of the book. The characters had a great development and would definitely fit into this world. I recommend this book for historical fiction fans but if you're looking for a paranormal book, I would look for somewhere else. Audio Review The audio was done well. It was easy to follow and definitely suited for this story. There were inflections at the correct moments to really push the story and make it believable.

It's nice to listen to something a bit different. I enjoyed this book so much. Wil look for more from this author.

I loved this book! The dynamics of the characters was thrilling and made for a very great story!

This book was perfectly paced and wonderfully composed. It had me in laughter and tears when it was over, this truly is one of those books that you'll read over and over and tell all of your friends about because it is that ground breaking, enriching and sensational.

This is a story composed of snippets about various characters. It happens during the American revolution and has players on both the British and American side. Many of the characters are brutal and blood thirsty while others are inept and seem unable to survive from their own efforts. During the French and Indian wars a group of British soldiers are tasked with finding an ancient relic but upon finding it they take the item and decide to prevent it from falling into the British King's possession. They remain hidden in America and continue activities which is not fully explained in the story other than keeping the relic from the king. The main story involves a British captain, and his attempt to deliver a message to New York City. There is also a business man who is torn between his wife and another women he barely knows. It contains a lot of unnecessary description of sexual encounters between people and self imposed. This does not add much to the overall story line. It also goes into great detail about brutal torture and battle scenes. This had the potential of being an interesting historical story but fell short with the extra overly detailed descriptions of brutality and sexual obsession. This book was provided free of charge with the expectation of an honest review.

Okay... So I struggled through this... I made it to the 7th Chapter because I received this book free... in exchange for a fair review.. I REALLY wanted to enjoy this book because I live in Upstate, NY... And I live within the Sullivan-Clinton Campaign Area... The constant need for this Author to "over-describe" everything from mutilations.. to deviate sexual acts, nauseated Me... Not one chapter passed without crude or unnecessary acts or descriptions... I am not a prude... I can only hope that the Author takes this criticism in a positive way... because the Story is a good subject... But the overload of macho detail is mind numbing! I am sorry I can not recommend this book... In fact... It should come with a rating of censorship! I was blessed that my Young Granddaughter was not with me when I was listening. I feel for the Narrator... as He did his best with a hopeless book. Kudos to You!