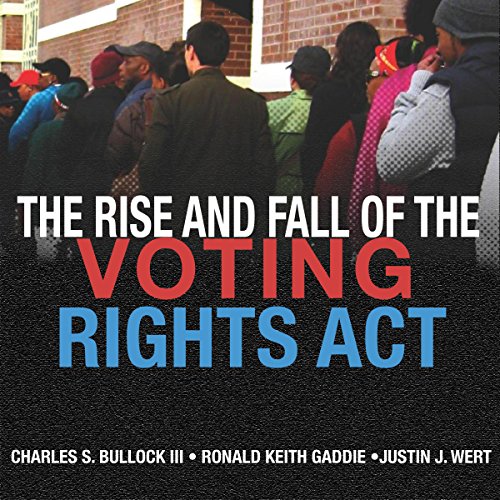 The Rise and Fall of the Voting Rights Act

On June 25, 2013, the US Supreme Court handed down its decision in Shelby County v. Holder, invalidating a key provision of voting rights law. The decision - the culmination of an eight-year battle over the power of Congress to regulate state conduct of elections - marked the closing of a chapter in American politics. That chapter had opened a century earlier in the case of Guinn v. United States, which ushered in national efforts to knock down racial barriers to the ballot. A detailed and timely history, The Rise and Fall of the Voting Rights Act analyzes changing legislation and the future of voting rights in the United States.

In tracing the development of the Voting Rights Act from its inception, Charles S. Bullock III, Ronald Keith Gaddie, and Justin J. Wert begin by exploring the political and legal aspects of the Jim Crow electoral regime. Detailing both the subsequent struggle to enact the law and its impact, they explain why the Voting Rights Act was necessary. They go on to closely evaluate the 2013 Shelby County decision, describing how the ideological makeup of the Supreme Court created an appellate environment that made the act ripe for a challenge.

"This book addresses a hugely important area of public policy by persuasively analyzing the past achievements of federal intervention and the challenges facing advocates of new legislation." (Merle Black, coauthor of The Rise of Southern Republicans)
"An authoritative, scholarly study that students and scholars will rely on for its richly detailed and thoughtful analysis.... I recommend it highly." (Gary May, author of Bending Toward Justice)