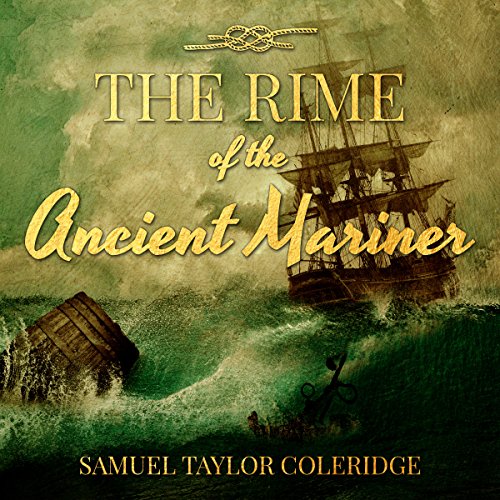 The Rime of the Ancient Mariner

By: Samuel Taylor Coleridge
Narrated by: Gregg Rizzo
Try for $0.00

The Rime of the Ancient Mariner is the longest major poem by the English poet Samuel Taylor Coleridge, written in 1797 to '98 and published in 1798 in the first edition of Lyrical Ballads. Some modern editions use a revised version printed in 1817 that featured a gloss. Along with other poems in Lyrical Ballads, it is often considered a signal shift to modern poetry and the beginning of British Romantic literature.

The Rime of the Ancient Mariner relates the experiences of a sailor who has returned from a long sea voyage. The mariner stops a man who is on the way to a wedding ceremony and begins to narrate a story. The wedding-guest's reaction turns from bemusement to impatience to fear to fascination as the mariner's story progresses, as can be seen in the language style: Coleridge uses narrative techniques such as personification and repetition to create a sense of danger, the supernatural, or serenity, depending on the mood in different parts of the poem.

What listeners say about The Rime of the Ancient Mariner

This is something different.

With a wonderful Narrator listen to a special Audio Book its sound reverberates through the ages.You may be surprised at how
much you enjoy it.

Warm yourself by the harth and enjoy the poem.

I really enjoyed this book. I imagined myself at a tavern or warming by a harth fire and listening to a Skald or Troubadour resighting a poem of life on the sea. This quick listen was indeed a pleasure to listen to.

I received this review copy free of charge and have voluntarily chosen to leave a review.

Loved it!! Great work of art, and it's so much fun to listen to it, instead of read it. Loved the narration! You can lose yourself in it, it's beautiful writing. I highly recommend this to anyone, it's short but oh so sweet. So glad I listened to this!
I was given this free review copy audiobook at my request and have voluntarily left this review.

Improves on every fresh listening

This is a poem meant to be read aloud, and Mr. Rizzo has done a valiant job interpreting and delivering this beautiful work.

A good performance of a classic poem. I enjoyed listening to this poem, but I think that I would need to actually read the words myself to get the full import of the tale. The narrator did a good job, but there was some distracting background noise at times.

I received a copy of this audiobook through Audiobook Boom and chose to review it.

The Rime of the Ancient Marinier

I've never read this before.I enjoyed this reading narrated nicely by Gregg Rizzo.I was given this book by the narrator,author or publisher free for an honest review.

A Classic Poem Meant to Be Heard Aloud

I got so much more out of this epic poem by listening to it than I ever would have out of reading it in the quietude of my head. It deserves its fame.

The narration by Gregg Rizzo was adequate, but the title suffered from production issues. There was some distracting background noise throughout the recording.

*** Disclaimer: I was given this free review copy audiobook at my request and have voluntarily left this review.

'The Rime of the Ancient Mariner' is a classic English poem, with some very memorable and haunting verses. The archaic language both enhances the atmosphere and gravity of the story, while at the same time making it occasionally difficult to follow. Greg Rizzo does a fine job narrating. His tone and delivery work well with the subject material, and adds to the listening experience.

I enjoyed it, despite having to back up a few times thanks to some of the archaic phrases and terms, but that's to be expected with 200 year old poems.


I received this audiobook in exchange for an honest review.

This was an entertaining audio version of a classic poem that generated many allegorical references still heard today (such as "water, water everywhere...not a drop to drink"). I enjoyed the rendition, although the narrator's pace could have been a touch slower with more pauses in the delivery and a little more emotion. Overall, a fun, entertaining listen.

I had heard of this poem, but never taken the time to read it in it's entirety. I was surprised at the number of references to this poem that I had never recognized in pop culture.

This poem, like a lot of literary classics, is a little bit dated and can, at times, be a little tricky to follow. The extra effort to understand it pays off though, and the overall story is very delightful.

The narrator did a good job with a lot of the tricky cadences in the poem. His voice was also the perfect fit for the story.

Overall, I thought it was a decent book. Well worth my time.