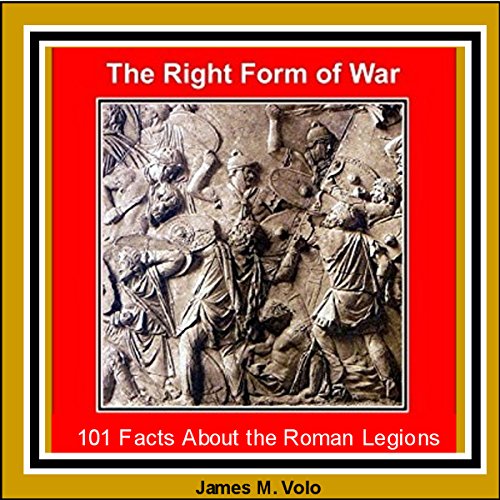 The Right Form of War

By: James M Volo
Narrated by: Drake Johnson
Try for $0.00

This audiobook is intended to give a generic picture of the military organization, armor, weaponry, etc. of the legions, with emphasis on the late Republican (Civil War) and early Empire period. This study also inevitably leads directly to the conflict between Republican and Imperial concepts of government. The listener will find that neither form of government was without its hubris, violence, bloodshed, and injustices.

The one consistent factor working in the background that gave rise to this transformation was the legion. The legions had slowly passed from the defense of the Republic to a force that threatened it from within, its soldiers being more loyal to its generals than to its form of government.

Warfare has been conducted from before the beginnings of recorded history. The difference between prehistoric and ancient warfare is less one of technology than of organization. This warfare was up close and bloody. Panic was the great threat on the ancient battlefield, and maintaining the right form of war was very important.

Cassius Dio reports that ancient warfare took many forms: “Skirmisher contended with skirmisher, heavy infantry fought similarly armed opponents, while cavalry clashed with cavalry. Another contest put the Roman archers against the barbarian chariots. The barbarians would launch their chariots at the Romans, throwing them into disorder only themselves to be forced back by arrows, since the charioteers generally fought without armor. Here a horseman cut down foot soldiers, there a troop of foot soldiers hauled down a rider. Some Romans would advance against the chariots in close formation, and others would be scattered by them; sometimes the [enemy] would close with the archers and rout them, while others skipped aside from the arrows at a distance.” In all cases, it was essential the army keep its momentum and its order, aided by the cavalry, who charged to break the enemy where the resistance appeared stiffest. No ancient army, even that of Rome, was effective in retreat.

Augustus Caesar ruled Rome as sole emperor for 41 years (27 BC to AD 14) and is reputed to have said on his deathbed: “I found Rome made of brick and I leave it in marble.” Yet this was not achieved without much patience and effort.

With Rome's schedule of Republican civil wars at an end, Augustus was able to create a standing army for the empire, fixed at 28 legions of about 170,000 soldiers, supported by numerous auxiliary units recruited from conquered areas of the world. When August died, there were a mere handful of persons throughout the empire who had known any other ruler, any other form of government, or any other military force. The Republic was a vague memory, the kingdom a decrepit myth, and the Empire a shining city at the center of the world.

What listeners say about The Right Form of War