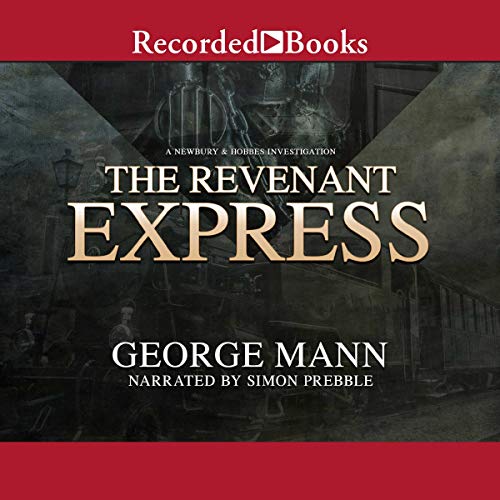 By: George Mann
Narrated by: Simon Prebble
Try for $0.00

The grand adventure continues in Geroge Mann's Newbury & Hobbes steampunk mystery series, as a Victorian special agent races across a continent to save his beloved's life on board The Revenant Express.

Sir Maurice Newbury is bereft as his trusty assistant Veronica Hobbes lies dying with a wounded heart. Newbury and Veronica's sister, Amelia, must take a sleeper train across Europe to St. Petersberg to claim a clockwork heart that Newbury has commissioned from Faberge to save Veronica from a life trapped in limbo. No sooner do they take off then sinister goings-on start to plague the train, and it is discovered that an old villain, thought dead, is also on board and seeking revenge. Can Newbury and Amelia defeat him and get the clockwork organ back to the Fixer in time to save Veronica? And can they do so without Newbury going so far into the dark side of occult magic that he can never return?

Meanwhile, Sir Charles Bainbridge is the only one of their team left in London to struggle with a case involving a series of horrific crimes. Someone is kidnapping prominent men and infecting them with the Revenant plague, leaving them chained in various locations around the city. But why? It's a rousing chase to save both London and Veronica. Will these brave detectives be up to the task?

What listeners say about The Revenant Express

I love George Mann’s writing. The Newbury & Hobbes Investigations are well thought out. This was my least favorite of the books metely because I don’t love zombies, and in the author’s universe, revenants are zombies. Nonetheless, a great adventure. Simon Prebble is the perfect narrator for this series.

Newbury & Hobbs are back.

An enjoyable continuation to the Newbury & Hobbs saga. The pace of the story was a total adrenaline rush & it seemed that something was continuing going on. I'd been waiting for this book (like so many other fans) for several years. Murder on the Orient Express is one of my favourite mysteries with Hercule Poirot & can see where Mann had gotten his inspiration for this book.