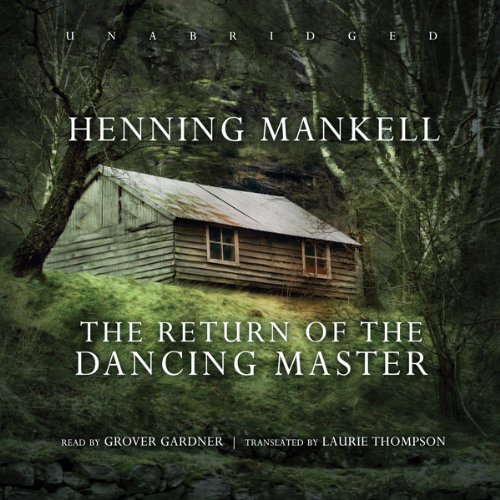 The Return of the Dancing Master

By: Henning Mankell
Narrated by: Grover Gardner
Try for $0.00

When retired policeman Herbert Molin is found brutally slaughtered on his remote farm in the northern forests of Sweden, police find strange tracks in the snow, as if someone had been practicing the tango. Stefan Lindman, a young police officer recently diagnosed with mouth cancer, decides to investigate the murder of his former colleague, but is soon enmeshed in a mystifying case with no witnesses and no apparent motives. Terrified of the disease that could take his life, Lindman becomes more and more reckless as he unearths the chilling links between Molin's death and an underground neo-Nazi network that runs further and deeper than he could ever have imagined.
©2003 Laurie Thompson (P)2000 Blackstone Audio, Inc.
Historical International Mystery & Crime Police Procedurals Crime Thrillers Suspense
Show more Show less

What listeners say about The Return of the Dancing Master

The person who translated this Mankell novel did him no favors. Poor word choices and an obsessive dedication to word-for-word translation rendered the dialogue wooden and the narrative ponderous. Certainly a good translator will capture the culture differences reflected in the original language and recreate the Swedish forthrightness, introspection, and coolness, but this translation left the reader nothing to work with and flattened an otherwise entertaining read.

Good, but Author Has Better

This is a very good read of a good, but not great book. The story is gripping although the main character gets a bit whiny. While his self-pity and self-adsorption were key components of the character, Mankell could have been a little more subtle. After a few hours you just want to slap him. The reader does a good job of bringing the story to life and the story (whininess notwithstanding) keeps your interest. The book defintiely plays to Scandanavian paranoias that seem a bit less shocking in translation. I liked the book without loving it. The author has done better.

Although the Nazis called themselves National Socialists they were the opposite: fascists.
On the political spectrum fascists would be considered "extreme right", socialists "far left", and communists "extreme left". Mankell knows his history.

I love Mankell's novels precisely because of the dark Scandinavian mood. Kurt Wallander, the main character in many of his books, is a haunting portrait of a detective in his 50s who is questioning his life, his work, and the personal price it has extracted. He feels a duty to society to take on the difficult, exhausting, and grisly task of solving murders. He worries about what may be the breakdown of modern society and he is not sure his work has any measurable effect. His country is coping with major societal shifts resulting from the dissolution of the USSR, immigration, and globalization. His loneliness and depression are palpable yet he yearns for hope, meaning, and connection. I come away with a respect for the emotional honesty of a character that thinks and feels rather some two dimensional "shoot 'em up" type hero. I wonder about the people who tackle these issues in real life and what we ask of them.

Stefan Lindman, the protagonist in this book, is facing somewhat similar personal issues because of the possibility of death but he can bounce back more easily because of his relative youth. He has to grapple with evil, past and present, memory, retribution, and forgiveness. I find Wallander a more compelling character but I will take Mankell's writing however I can get it. Paradoxically, when I finish these books I feel rejuvenated and grateful for my life.

If you enjoy these books you may also like The Girl with the Dragon Tatoo by Stieg Larsson.

I enjoy the Wallender series by Mr. Mankell, but this one introduced a new lead character named Lindman. Overall, the audio book just wasn't interesting enough for 13+ hours. I actually dozed off a few times while listening to the book and didn't bother to go back to listen to what I missed. It ended up not mattering at all. There is a lot of repetition and scenes that go on and on with little information. Lindman, a visiting policeman, is interested in his former co-worker's murder. He is supposed to be helping the local detective, but doesn't tell the detective all the information he discovers. His justifications for holding back information are strange. Lots of coincidences happen and I see clues that the detectives ignore.

Unfortunately, the narration was only acceptable. It was more of a monotone reading instead of a performance. There was no change of voice for different characters, male or female. The strange choice of words appears to be a very bad translation of some parts of the book.

There was some interesting history about Sweden's participation in WWII. In the future, I will make sure my next choice of a Mankell book is from the Wallender series.

Henning Mankell is just one of the best detective writers in the genre. This book is exceptional. The main character isn't quite as fascinating as Kurt Wallander, but he is fascinating for his own reasons. From the tension of a human trying to figure out his own life while solving crimes, to the horrific nature of the crimes and the incredible stories behind them, this is just worth the read.

Mankell's new hero is troubled, flawed, likable, and at times not very nice. The villain is sympathetic, and all the side characters have their own flaws and virtues. There are almost no points where it feels like the writer is padding the story just to make it longer. It's a well-told story with excellent characters and a disturbing premise.

The translation seems to have been more for the UK's version of English than the US's, but anyone who watched Harry Potter will follow it. There are some places a phrase sounds awkwardly translated. Not enough to distract, but enough to notice.

Overall, I love this writer and this book.

The best of Mankell

I have spent a lot of time with Henning Mankell and his characters and I think this is his best story. I have listened to this book a number of times and will again. If you enjoy Swedish stories, sit back and get ready for a complex piece of work..

I couldn't finish it. The story dragged on

Terrible. I only got a few chapters in and I just dreaded picking it up

This book is about two murders. They happen in Sweden. The people have Swedish names. The places have Swedish names. One dog is gutted. Another disappears. One detective thinks. Another detective thinks. Mr. Gardner reads. People drive places. It is cold. An old man who dances with a doll dies. Another who plays the violin dies. Decades go by, while you are listening. You wait for something interesting to happen. It does not. There is an attempt to tell a story about the Nazi years. Some people are nice. Some are not. You have no desire to visit Sweden, if this is what it's like. They do make good cars. Mr. Mankell has written good books. This is not one of them. You might fall asleep while listening to this. You could sleep eight hours, wake up, and not have missed anything.

What would have made The Return of the Dancing Master better?

I agree with a previous reviewer who suggested that a better translation would have helped. It felt literal and stilted at times. I'm a fan of Mankell and I had a hard time believing he wrote this book.

The pacing felt slow and repetitive. I kept listening, assuming things would pick up; alas, it was not to be, and at the end I was mad at myself for sticking with it.

The narrator had what I would describe as a "dry" voice. Combined with the slow story, it made for a dreary experience.

Like others I have loved Mankell's other stories with Sean Barrett reading. Giving a different voice to narrate 'The Return of the Dancing Master' was like tasting a new wine expecting it to be a still wine and finding a delightful spritzig. Now Grover Gardner is not exactly bubbly. Yet it made me prick up my ears and listen more intently.
What I had found interesting is the continuing influence of history as a shadow in the present. Mankell uses this in his fiction both here and in the 'Wallander' novels. So this is a reminder, a 'Lest we Forget' of the long time line of the effects of war, the Nazi of the past (and Neo Nazi in the present) in particular. It is a murder mystery.
I found this an engrossing story, very well read that added to my respect for Henning Mankell as a writer.