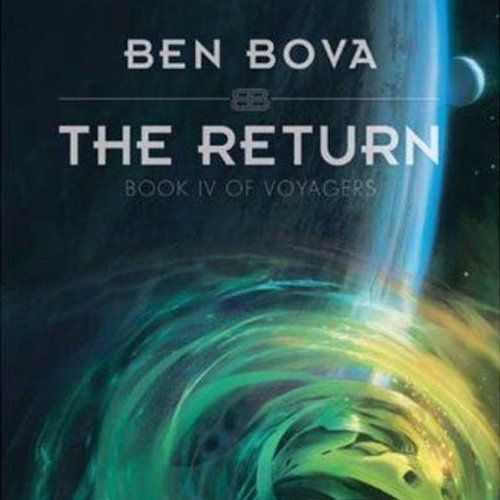 After more than a century of exploring the stars, Keith Stoner returns to Earth to find that the world he has come back to does not match the one he left. The planet is suffering the consequences of disastrous greenhouse flooding. Most nations have been taken over by ultraconservative religion-based governments, such as the New Morality in the United States. With population ballooning and resources running out, Earth is heading for nuclear war. Stoner, the star voyager, wants to save Earth's people. But first he must save himself from the frightened and ambitious zealots who want to destroy this stranger - and the terrifying message he brings from the stars.
©2009 Ben Bova (P)2009 Blackstone Audio, Inc.
Fantasy First Contact
Show more Show less

What listeners say about The Return

Loved the book. So much of what he wrote about is right on target here, where I live. Religion rules the lives of many of these people here, most of which are very uneducated, poor, and having as many as 16 children. The story line keeped me interested through out. Wish I had started with the first in the series.

If you're looking for a story of space, aliens, space travel, this is not your series. The review addresses Voyagers, Voyagers II, III, and The Return.

Plot. A spacecraft is approaching earth — no response to earth signals. A mission from earth determines that the craft is a sarcophagus - the sole passenger is a dead alien. A ship message tells us to study the alien and his ship and send him on his way to other worlds. A USA astronaut decides to stay on the alien ship, goes into stasis for 18 years, and returns to earth. He has changed - and so has the earth.

Liked: Stuck with it, well, because it IS a Bova series. Narration and production are fine. No sex, no objectionable language, clean reads.

Not so hot: This is NOT a typical SciFi, rather a platform for the author to voice concerns regarding world politics, religious zealots, climate change, nuclear war...the earth will perish if humans do not change. There have been other books and movies with the same basic theme - The Day the Earth Stood Still, The Man Who Fell to Earth, The Abyss, more. So, it's been done before - and better, IMO.

Hate this story or plot. A political and religious dystopia. Not my kind of SyFy.

one of the better of this series. i definitely think this will live through the ages

Another enjoyable story from Bova

Be Prepared for the Soap Box

I listened to all four of this series because I love science fiction, but this the forth in the series, Bova is on his own soap box/religion especially regarding population control. It's his his book/story so he can do whatever he wants to, but for me it was bit Over killed and soured the book.

Could not finish it

I listen nearly to the end of the first part, then skipped ahead a couple times and at the end could not finish it. There was not enough science fiction in the story to keep me interested to listen to environmental lectures.
It appears to me that many good authors which are entertaining get to a stage were they feel they have to educate the population about current world problems. Please stick to entertainment that is why we buy fiction.

If you could sum up The Return in three words, what would they be?

What other book might you compare The Return to and why?

When he beams aboard the Star Ship.

The Earth faces disaster and only one man can save them.

Just a great Story, in the tradition of the "Grand Tour" series.