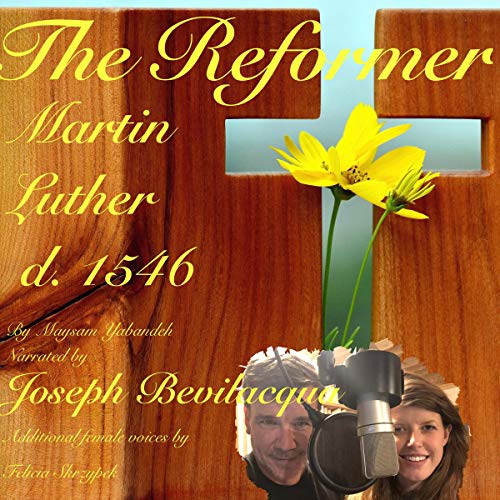 By: Maysam Yabandeh
Narrated by: Joseph Bevilacqua
Try for $0.00

What Nazi Germany did to the Jews did not happen overnight. Although the historians differ on the origin, some argue that the foundation for it was built by the writings and deeds of perhaps the most influential reformer of the millennium, Martin Luther. This screenplay is a journey through his life to give us historical facts as well as insights into his reformation. Whether or not the events of his lifetime could have influenced the Holocaust is left for the listener to decide. The monologues are verbatim copies from Luther's books, articles, and sermons. Preserving historical accuracy has been the chief goal in formulating conversations missing from recorded history.

What listeners say about The Reformer

An Interesting View of Martin Luther

What was interesting about The Reformer?

I've been in full-time ministry for nearly 12 years, and my spouse grew up in a heavily Lutheran Community throughout her upbringing. As such, "The Reformer" immediately struck me as something I'd be interested in.

Additionally, I'm also the kind of guy who really enjoys history. I regularly read from the NIV Cultural Backgrounds Study Bible and/or Archaeology Study Bible. Admittedly, my ancient cultural/historical studies focus much more on on the BC or early AD timelines, so I haven't done much reading on Luther, outside of a few stories or other references while working on my Master's Degree.

What was most interesting to me was learning a bit about Luther's negative views toward the Jewish population of his day. The stories I have read about Luther didn't get into his negative thoughts about the Jewish community, and sadly, I'm not sure I was even aware that Luther penned a book titled, "On the Jews and Their Lies."

Although "The Reformer" was written as fictional historical drama, the production taught me something about the history of Luther and the Reformation of which I wasn't previously aware. Knowing that the quotes provided within this production were from Luther's own writings was a painful reminder that there are some dark truths behind a number of influential people throughout history which are often swept under the rug. Having some of Luther's teaching's brought into the light is much better than pretending they didn't happen.

How was the performance and/or narration?

"The Reformer" is only 50 minutes in length, but I thought the Narrator did an outstanding job of walking through the plot line. Having an additional female voice enter in on some of the scripture passages was a nice touch.

Can you tell me more about the storyline?

The only part of the story I hesitate to fully accept is that of Luther and/or the Reformation as part of the foundation for Nazi Germany. The Publisher's Summary notes: "What Nazi Germany did to the Jews did not happen overnight. The foundation for it was built in German culture over the centuries, arguably started by the writings and deeds of perhaps the most influential reformer of the millennium, Martin Luther."

While "The Reformer" does a great job of offering some insights on Luther that shouldn't be ignored, I believe that from a historical perspective, Luther offered more overall good to German/European History than bad. Being a 50 minute audio screenplay, "The Reformer" doesn't provide additional details of the cultural milieu of Luther's day and age. As I listened, questions entered my mind like:

- What the overall percentage of the Jewish population in Luther's day?
- What level of political, social, economic, etc. influence did the Jewish population have?
- What, really, was at the root of Luther's thoughts and attitudes towards the Jewish population?
- What were the additional [many] aspects of German Culture that led to Nazi Germany? From sociological, political, psychological, educational, economic, national, and religious?
- Perhaps most importantly, what level of influence did Luther's book, "On the Jews and Their Lies" have in the years after his death? Was his book a major influence in Germany and/or other European nations in the 50, 100, 200+ years after Luther's death?

Questions such as these would require a tremendous amount of historical study, the data of which isn't fully presented (and couldn't be fully presented) within this production.

Overall, I really do appreciate the creativity in the story telling and the overall effort put into this production. Nevertheless, I hesitate to embrace the part of the storyline in which Luther's views on the Jewish community in the early 1500's became a foundational part of Nazi Germany 400 years later. The word "foundational" is quite strong. While Luther may very well have influenced the culture which ultimately led to Nazi Germany, I'm not (currently) convinced his role can be viewed as "foundational."

In short, it's honorable to note Luther's book, "On the Jews and Their Lies" as a negative part of his history, and his encouragement to burn down buildings and schools is deplorable. I'm grateful "The Reformer" is open about the positives and negatives of Luther's teachings.

This audio book is an audio presentation of of a screen play about the changes in the life of Martin Luther that lead to his changing attitudes towards Jews. His influence among the German people and how his view progressed in German society.

The narration was good but the verbal description of the movie scenes were a bit of a distraction.

This book was provided free of charge and this honest review was given voluntarily.

Good, but as advertised: a reading of a screenplay

This is a cool little dramatized historical document. It is, in fact, a direct reading of a screenplay, including the director's cues, etc. I did not know much of the historical context of Martin Luther, and this was a quick, entertaining primer.

A Written Screenplay that is not long

I'm not a religious person and knows very little about this part of history and Martin Luther this interesting yet important character. But I have to say this is a well-written, well performed nice play. It triggers my interest to do more study about this history. The play is well narrated (performed) by the actor/actress.

I speak Spanish to God, Italian to women, French to men, and German to my horse. Nice!

At first, I was hesitant to pick this up, I've listened to other religiously stilted books before and wasn't sure I wanted to go down that road again. This is NOT one of those books, this is a theatrical telling of the life of Martin Luther (the protestant reformist). I'd say the only real problem with the story its self is that it's too short. There is a lot to Martin Luther and this hits the high notes very well, but you lose some of the nuances of history with this kind of telling. Probably less of a problem overall and more a necessity of the format.

Otherwise, the narrators do a great job. I'm not a fan of the fading from one voice to the next the way they did, I found it more distracting than helpful/interesting.

Overall I enjoyed it, I haven't delved into history on Audible much at this point, but this makes the case that I probably should.

To the Author, I don't know if you'll end up getting to make a movie out of this, but best of luck if you do. I could see this being incorporated into a school/college history class very easily.

Of all of the places to find the underpinnings of the holocaust, I did not expect to hear about Martin Luthor. The drama feels a bit forced, however the message and its importance comes through clear and strong.

The Reformer was a well written screenplay with great narration. It's not usually the kind of thing I go for; I'm glad I gave it a chance.

The book offers a different take on the course of history, and it's a fun read.

Although I had already studied Protestantism I did not know about Martin Luther's antisemitism. I could not believe Luther had said such terrible things until I googled them myself and learned that they are historically accurate. The voice actor's performance was in particular quite admirable as he presented a diverse yet cohesive character of Luther despite all the ups and downs in his life. I in particular liked the way male and female voices were mixed. It was a novel and interesting technique by assigning the male and female voices not based on the gender of the characters but based on the content of their speeches.

This is an educational audiobook as it teaches how the protestant reformation started, and yet it is a drama as it gives an entertaining story. Joseph Bevilacqua's performance is astonishing.

I never knew Martin Luther’s story. This book really shows you the man and his character. I recommend this to anyone looking to learn more about a godly man. And a powerful speaker.

I wasn't really expecting a cliché-ridden biopic of Martin Luther, but that's what I got. The language is peculiar in places, but I expect it's a translation from something else. The narrator is a perfectly awful fit for this book, and fifteenth (fourteenth?) century Prussia ends up sounding like a spaghetti Western.