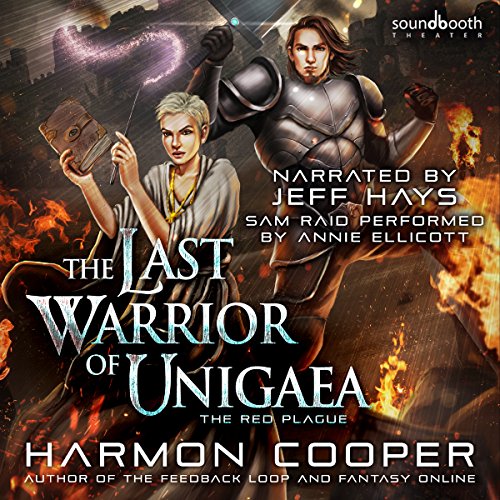 The Red Plague: A LitRPG Trilogy

By: Harmon Cooper
Narrated by: Jeff Hays,Annie Ellicott
Try for $0.00

Following his massive personal loss in the second book, Oric Rune reaches the city of Tael to join Lothar and Sam Raid. Battered and bruised but not yet ready to give up on his quest to save Unigaea, Oric and company set off for Tagvornin to address the Red Plague. With a newfound mission and time running out as the Red Plague continues to spread, the moment for Oric to make his mark on Unigaea is now. But will he be able to? And is it even possible?

Soundbooth Theater is proud to have produced this last installment of the Last Warrior of Unigaea, and what an honor and joy it has been to have Annie Ellicott deliver an amazing performance for every female character in these last two books in the series, from her original role as Sam Raid to the fussy giantess, Gadsaa. Watch for more of her work with Soundbooth Theater here on Audible, and for her to reprise her role as Sam Raid in future projects....

The Soundbooth Theater team for this production:

What listeners say about The Red Plague: A LitRPG Trilogy

You know what I love? I love an author who isn't afraid to make a trilogy. Nowadays, it seems everyone wants to create an open ended world that they can play in in perpetuity, but have no responsibility to the reader/listener. I think o Geore RR Martin and his it will end but never end GOT, Jim Butcher's see no end in sight Harry Dresden, and even Earle's Lion's Quest. Too much time passes between each project, and with no real end in sight the poor fan has to suffer and hope that a series will see some love from its creator. Cooper plays this smart. He sets up a trilogy that is self contained, but is also set in a shared universe in which other events take place. So you keep the setting and get different events and characters. More importantly, he concludes his story. So, yay for his consideration.

Now, as for his story. . .WOW. What a way to end it. Revenge isn't easy, and loss is hard. Our heroes suffer, and sacrifice, but in the end we get the big BOOM we have been waiting for, and it has been worth the wait. The story is much fastre paced than the previous book, and you will probably need to stop the book to catch your breath. There are times your heart will break, and then you might just find it healed. Roller coaster doesn't do this book justice as a descriptor. I got this and immediately started listening.

This is the third book, so don't listen until you get the first two.

Hays and Ellicot really put their all into this performance, and the emotion is real. Seriously, these folks should get a grammy for thier performances. You hear them and all you can think of is this is why they are professionals.

The combination of their vocals and Cooper's writing makes for a nitrogyleric combination of words that are dangerously volatile to your mind!! So beware, they will move you.

Going to read more from this writer I like the world he has setup for it all to take place in.

Even though the ending felt a little bit rushed, the story was fantastic! Lots of action and humor, and a little bit of sadness but it’s OK because it’s not much. The narrators make this story extra enjoyable because they bring the story to life and make it fun. This is just a story that will tug at your heart strings and also make you laugh.

i enjoyed the series however this book had to many questions and not enough answers. The ending is poor and if this is where the series stops i will not buy another book from this author.

A great end to the Unigaea series

Once again I really loved a book by Harmon Cooper. I was not sure how he was going to pull it together from the end of book 2, but in the end it turned out great. This last book in the Unigaea series has a fair bit of humility to it, in that it not only told a story but also the characters and thus the listener really felt a connection to the events and challenges that were occurring. I felt the characters often had a dilemma, and Harmon really made the reader (or listener) feel the pain of their decisions. Lothar stepped up a bit in this book, kind of coming out of his shell and becoming a viable part of the team.

As is always the case from Jeff Hays, the voice acting is superb. Paired with Annie Ellicott made this series incredible. I really hope Annie keeps working with Jeff as the two together make the listening experience so much better.

The book continues right where book 2 left off and never stops. Harmon is great at keeping the story moving at a fast pace and still divulging a lot of info and dialogue. This was a great LitRPG read with some good humor. All of the characters were likeable and added to the story. I really enjoyed the series and feel it kept getting better with every book. As usual narration was great and Jeff Hays is becoming one of my favorite narrators. Listened at 1.5x.

A great end to this trilogy.

I loved the trilogy and look forward to seeing where else in the proximal galaxy Orik shows up. The narration by this team is superb as always. I received this book for free at my request and voluntarily reviewed.

They say all good things must come to an end, and while this book ends the Last Warrior of Unigaea saga, I sure hope this isn't the last we've seen of Oric, Wolf, and Sam. If you've followed the series then you already know that book 2 ended with a bang! And an emotional gut punch. Well book 3 throws us right back into the action and continues the wild, fast paced adventure and brings the saga to satisfying conclusion. This entire series is yet another homerun by Harmon Cooper and shouldn't be missed.

I've been a huge fan of Jeff Hays for a while. The man's ability to give each character in a book has always blown me away, but now with the addition of Annie Ellicott his recordings have been kicked up another notch. Seriously, Soundbooth Theater has raised the bar for audio books.

I received a copy of this audio title for free in exchange for an unbiased review.

I loved this series, and this final book was a fitting end...or was it? Oric and wolf continue their adventures as Unigaea ceases to exist. Fans of litrpg, gaming, fantasy, and adventure will find this series to their liking. The only negative I can give is the length, which is a bit short for my taste. That said, it's well worth a credit. Very enjoyable.

What can I say after quite a quest to save the Unigaean world from the source bomb , we have action, friendship and a few twists along the way as well as some sad moments. Harmon brings it together in such a way that we live the lives of his characters and think of them as friends as well. I wish our future was what Harmon dreams it but the Proxima Galaxy worlds he dreams and writes about is something we wish to be true and after this anything Proxima will be top of my list.
Narration by the talents of Jeff Hays and Annie Ellicott goes to show you what can be done and why we want more than 1 narrator.
I asked for this audio and was provided it giving my own critique of this myself.