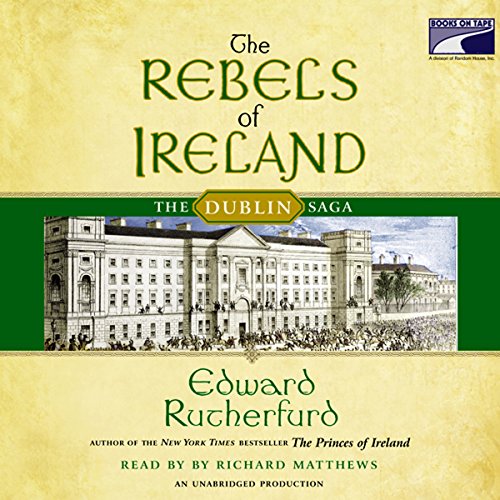 The Rebels of Ireland

The Rebels of Ireland

The reigning master of grand historical fiction returns with the stirring conclusion to his best-selling Dublin Saga.

The Princes of Ireland, the first volume of Edward Rutherfurd's magisterial epic of Irish history, ended with the disastrous Irish revolt of 1534 and the disappearance of the sacred Staff of Saint Patrick. The Rebels of Ireland opens with an Ireland transformed; plantation, the final step in the centuries-long English conquest of Ireland, is the order of the day, and the subjugation of the native Irish Catholic population has begun in earnest.

Edward Rutherfurd brings history to life through the tales of families whose fates rise and fall in each generation: Brothers who must choose between fidelity to their ancient faith or the security of their families; a wife whose passion for a charismatic Irish chieftain threatens her comfortable marriage to a prosperous merchant; a young scholar whose secret rebel sympathies are put to the test; men who risk their lives and their children's fortunes in the tragic pursuit of freedom, and those determined to root them out forever. Rutherfurd spins the saga of Ireland's 400-year path to independence in all its drama, tragedy, and glory through the stories of people from all strata of society - Protestant and Catholic, rich and poor, conniving and heroic.

A tale of fierce battles, hot-blooded romances, and family and political intrigues, The Rebels of Ireland brings the story begun in The Princes of Ireland to a stunning conclusion.

A grand way to learn more about Ireland's story.

The narrator made the timeline of history come to life. I've also read the books and just returned from a two-week trek along the Wild Atlantic Way and the Coastal Causeway. But I enjoyed hearing the performances much more. Helped me develop a wee but of an accent as I learn more about speaking Irish. Such a grand way to tell the story of Ireland!

Not as good as part one

This was a little harder to follow than its predecessor and I didn’t find the characters as engaging. I was happy when I had finished it.

Excellent continuation of the Princes of Ireland

Kept my interest and was an enjoyable story rooted in Irish History. Well worth the listen.

Where does The Rebels of Ireland rank among all the audiobooks you’ve listened to so far?

I like how the history comes alive through the characters in the book.

His voice is perfect for this book.

No, but easily could.