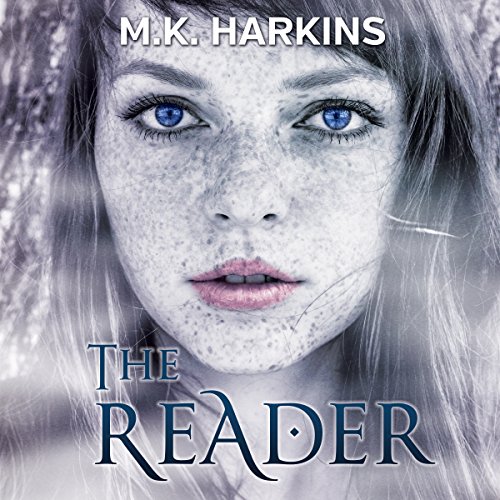 By: MK Harkins
Narrated by: Emily Kleimo
Try for $0.00

Hunted, shot, and without her memory, 18-year-old Ann Baker wakes in shallow water on a deserted Pacific Northwest island. She is soon approached by two young men claiming to be her friends. Something isn't right, but when gunshots sound, Ann is left with little choice but to allow Devon and Archer to help her escape. Soon she finds herself in their North Bend mountain compound, where the higher evolved humans claim to be mind-readers. While Ann heals, she realizes they believe her to be one of the last and most powerful of all - The Lost One. She's welcomed by most with opened arms, but not everyone is happy about her arrival. A jealous adversary has plans for Ann, which spirals the entire Reader community into chaos. As lies, murder, and betrayal threaten to rip apart the once harmonious mountain dwellers, Ann is thrust into making a decision that could save or devastate not only The Readers, but all of mankind. But there's just one glitch: by doing so it may require her to make the ultimate sacrifice.

What listeners say about The Reader

I finished this about a week ago and I'm still conflicted with my thoughts! I enjoyed some things and was thoroughly annoyed with others!

This starts off with a young girl waking on the beach, with no recollection of who she is, how she got there or why she seemed to have been shot! Next thing she knows, she is approached by two strangers, who explain that they want to help and will explain things when she is safe. She soon realises that things aren't as they seem and that she may not be safe after all!

This started out strong, I was intrigued to see who the young girl was and why she had lost her memory but then it hit something that immediately annoyed me!! Ann meets Devon and Archer and of course, she has a connection with, not just one!! But both!! I wanted to put the book aside right there as I hate insta love and hate love triangles, but I was intrigued enough with the world to keep going.

One thing I really liked about this was the world. I liked the 2 different types of people, the readers who can read minds and the jacks who hijack other bodies. We also had Seers, but they were wiped out. The Readers are hiding out from the Hijackers, but long ago the Seers predicted that a special Reader would come who would unite everyone. And I bet you can't guess who this special Reader is.... yep, Ann!

Anyway, what follows was an enjoyable read but I did feel like the whole plot was rushed at times! Everything seemed to happen and resolve rather quickly and I felt like Ann didn't really contribute that much to it. The whole story arc revolved around her and her life, but I felt like she never did much to help or her character didn't get a chance to shine. Also, the ending was.... odd. I'm not going to say anything about it but I found it to be hurried and a bit of a let down.

In all, this was an OK read. I'm not sure if it's going to be a series or not but if it does, I hope Ann grows as a character!

Emily Kleimo did a good job of narrating Ann, but overall I felt like she only read the story and didn't perform it. There were a good few different characters but I found that the narrator didn't have a lot of different tones. I think with practice she could be really really good!!

*I received this for free but voluntarily reviewed it. This in no way affected nor influenced my thoughts.*

Can't get the story out of my head!

What did you love best about The Reader?

The story is fantastic! I finished listening to it two days ago and I'm still thinking about it.

Which character – as performed by Emily Kleimo – was your favorite?

I immediately fell in love with Ann’s wit and quirky attitude. Emily did a great job voicing Ann's character. I had her pictured in my mind long before her description had been made clear, between Emily's portrayal and MK's characterization, I couldn't help but think of Ann as a real person. All of the characters are equally flushed out and well-drawn bu MK Harkins.

This book brought tears to my eyes more than once.

With a great beginning, a well-paced middle, and an extremely satisfying ending, you can’t go wrong with THE READER. It’s another winner from MK Harkins!


This was a fun and a quick read. The pace was good and the story was interesting enough to pull me into it right away. The concept that the heroine is a mind reader is very interesting

I never wanted it to end.

If you could sum up The Reader in three words, what would they be?

What other book might you compare The Reader to and why?

This was such a unique story, they only comparison I can draw is based on YA genre books like Thera Mafi's shattered or Jennifer armentrout's Covenant series. This book has some similar elements as those but it is not really comparable based on just a story plot.

When Devon and Ann finally have an honest discussion in the boat.

Yes. It gave me the feels. The last 10 minutes had me happily celebrating and gutted me all at the same time.

This books is way beyond credit worthy! Phenomenal doesn't even cut it. It is well plotted, well performed, well written, absolutely left me wanting more. I have never crossed my fingers for a series to follow more than with this book. This was the first book by this author for me and I have to say she made me a fan girl. I can't wait to see what else she brings to the book world. I was given this audiobook for free by the author in exchange for my honest review.

I'm not normally a PNL fan but this one caught my eye and I couldn't stop myself from listening. Ann Baker finds herself without a memory, shot and hurt. What happens after that is about 6 hours of fast paced and high intensity action. It was a great book worth a listen.

I loved this book! I read straight through until I finished it! I would recommend it to others to read! The reader made it more enjoyable as well! Amazon reader

I liked it, great writing had potential to be really great but then I guess just got over it or was too determined to make a series. The ending feels forced, it doesn't quite match up. I lost my enthusiasm to read the second one.

I have high hopes for this author's development. The first half of the book was good; great foundation. The second half moved WAY too fast, jumping to the next point with zero subtlety or transition. It was almost like an outline in sentence form. The narrator did a great job of minimizing the over-dramatic nature of the text. I was in danger of getting my eyes stuck in my head from excessive eye rolling, starting at chapter 20. It goes from a jealous confrontation to the discovery of true love, to vengeful murder, framing the love interest, to the heroine's physical self-sacrifice, to a double-cross IN ONE CHAPTER. That's where I stopped to write this review. I won't be finishing this one. I wish I could send it back for for a rewrite so I would be able to finish the book. The editor fell down on the job here. To the author: keep writing; you've got something worth cultivating, but this wasn't ready to publish.

I feel like this was a great story that was published a bit too soon. I loved the characters and story line, but felt they all needed further development. At this point I was left feeling it was all a bit juvenile; yet still enjoyable overall.

I am rating this from an adult viewpoint. It would probably be different if I were 15 years old.