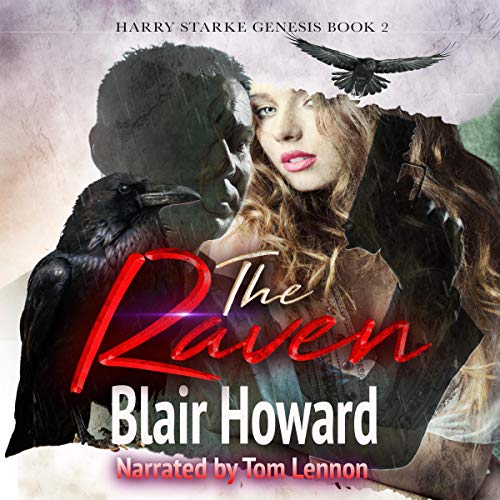 By: Blair Howard
Narrated by: Tom Lennon
Try for $0.00

A brutal murder. A condemned assassin with days left to live.

No one could figure out exactly why Sandra McDowell had to die.

What was her connection to the Raven, an aging hit man 20 years on death row with only days left to live?

Clues are plentiful, but all are dead ends.

The Raven is a mind-bending mystery thriller, a twister of a tale that will keep you up listening long into the night. You can’t hear just one!

Join Harry Starke as he tries to unravel the nightmare world of...The Raven.

What listeners say about The Raven

Russians involved ? or Not?

This is the second Harry Starke book of the series. His Detective Agency with his team of unusual characters are all settled in and Kate a homicide detective, who happens to be his girlfriend, helps him out where she can. Through his father Harry meets with a Judge at their Country Club. The Judge’s wife Sandra was run off the road and murdered and he would like Harry to find the murderer. The case becomes complicated and the Russian Mafia somehow seems to be involved. There is also a new character introduced, Bob Ryan, who Harry hires. The ending makes you realize that Bob has a backstory, which hopefully will be spelt out in the next book of the series.. The narration was good and the story compelling. I would love to listen to the rest of the series. I was given this free review copy audiobook at my request and have voluntarily left this review.

Well-written, lots of suspects to keep you guessing and a new addition to our cast of sleuths.

Tom Lennon brings the characters to life with his great narrating.

I am very impressed with how well the author kept you guessing and kept you wanting to hear more. The narrator did a fantastic job of bring the characters and world to life. I was given a free copy of the audio in return for an unbiased review.

A Judge’s wife was brutally murdered, was it personal to be hit repeatedly, or an amateur. Leaving his signature mark on the asphalt, that was usually the sign of a hired assassin. The only piece that fits it had been a case of the judge, that sent a killer to jail. He visit the man in prison, then three of the man’s buddies. They give him the clue to check the school where she was a benefactor of helping other kids, and the daughter goes there. The plot unfolds from the beginning, it’s as though you are listening in on Harrry’s
conversations. Another winner. Given audio for my voluntary review and my honest opinion

liked this very much

I enjoyed this book very much. The narrator is great and I'm looking forward to reading the rest of the series. It keeps you on the edge of your seat and provides some light romance for those that want that

The Raven by Blair Howard is a great addition to the Harry Starke Genesis series. I loved how the author wove this book. I didn't guess the killer in the book. Tom Lennon is perfection at the voice of Harry Starke. He brings the characters to life, and I can hear who is speaking. I highly recommend both this book, author and narrator. I definitely will listen to more.

The Raven. .
2nd book in the Harry Stark series. And every bit as good as the first.
I like Harry s light style, not dark and heavy.
Harry s character is developing nicely as he assembles his team.
Great narration by Tom Lennon.
Great entertainment and an easy listen.
I received a free copy of this audio book at my own request and voluntarily leave this honest review.

The Raven is an entertaining murder mystery featuring a younger Harry Starke in the early days of his agency.

The narrator of the audiobook is the same one who reads the rest of the series. He does a good job.

there were long pauses in the audio. that got a bit annoying. the narrator was great for the book though/ there. were some discrepencies in the writing at first, a few things didnt line up and a few things repeated. i ended up really getting into it though!

What can I say! Another amazing Harry Starke adven

Harry is in for a lot of pain in this book as he comes up against some pretty ruthless people. I know he is a bad guy but I did like Voran, better known as the Raven. We get introduced to the newest member of Harry's team, Bob Ryan an ex Chicago cop and marine, but is Bob everything that Harry thinks he is? This was a really great book and I really enjoyed it, not only did we have 1 case but 2 so some bonus excitement! You must really get yourself one of the Harry Starke books, you don't know what you are missing. I also enjoy listening to Mr. Howard's books when Tom Lennon is the narrator, I don't know what Mr. Howard sounds like, lol but when I'm listening to Tom as Harry Starke, I imagine that he looks like and sounds like Mr. Howard!
I received a free code for this book from Audiobooks Unleashed to listen to on Audible.com. This review is my own honest opinion.

I worried that not having listened to the first book would be a problem but it wasn't. This was a fantastic audiobook from the pen of Blair Howard and narrated brilliantly by Tom Lennon xxxxx

Another great story in the series. I would highly recommend it. This is for those who love mystery thrillers with plenty of suspense.

It started to rain!

Sandra McDowell, diving home in the dark after attending a school.board meeting, is brutally battered to death on the hard shoulder after being rear ended by a truck. The fear present in these opening paragraphs is visceral, almost tactile, the sort of unprovoked attack that terrifies any driver on an unpopular road alone at niight. But Sandra was much loved, generous with her charity donations and the wife of a judge. So was this a planned attack, one of revenge directed against an earlier unpopular verdict given by her husband. The execution of a Russian assassin, sentenced to death twenty years before by Jim McDowell, was scheduled to take place in a few days time in nearby Nashville, and it was noticed that three of his old friends had come to stay in Chattanooga.
With the judge being a close friend of Harry's father, the recently formed Harry Starke Private investigations agency is asked to find out who killed Jim McDowell's wife.

These early Starke novels are fascinating, getting to know the already seasoned police detective, turned private eye, and his friends and work colleagues, from the beginnings of the agency. And a new member is going to be added to the existing staff: another former cop, Rob Ryan. As always, characterisation of the main protagonists is good, they are complex personalities, not simple black and white. And the punches are not pulled, either: they must hurt. The story itself is, as always in the Starke novels, complex and twisting, Harry trying to use his intuition to determine what is true, not always accurately. There is an earthy reality to these characters despite the often crazy, deathly situations into which they propel themselves with such enthousiasm. Further assisting the development of them all, and of Harry in particular, is the excellent narration by Tom Lennon, who provides the voice of Starke, telling the story in first person. His reading holds exactly the right amount of languid, sardonic observation: he truly becomes Harry as well as giving good voicing to all of the other protagonists. A good performance, pleasing on the ear and further enhancing the story.

My thanks to the rights holder of The Raven, who, at my request via Audiobook Boom, freely gifted me with a complimentary copy. I enjoyed it immensely and note, with pleasure, that a new book, third in this series, is due for publication in December. Hopefully, it will also appear in audio soon, also.
For readers who enjoy fast action, detective thrillers, with convoluted plots, neat descriptive phrases, and well developed characters that still have a semblance of reality, this book is highly recommended

This Truly Is A Fantastic aAtion/Mystery Thriller

The Raven truly lives up to the description of being a "mind-bending mystery thriller, a twister of a tale that will keep you up listening long into the night"

This is another in the series of Harry Starke books which as usual is brilliantly written by Blair Howard and wonderfully narrated by Tom Lennon.
I can't wait to listen to more of Harry's adventures.
I was given a free copy of the audio in return for an unbiased review.