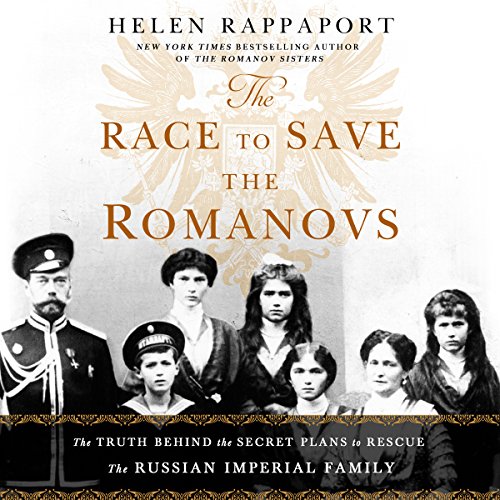 The Race to Save the Romanovs

By: Helen Rappaport
Narrated by: Damian Lynch
Try for $0.00

On the 100th anniversary of the murder of the Russian imperial family, acclaimed historian Helen Rappaport embarks on a quest to uncover the many international plots to save them, why they failed, and who was responsible.

The murder of the Romanov family in July 1918 horrified the world, and its aftershocks still reverberate today. In Putin's autocratic Russia, the Revolution itself is considered a crime, and its anniversary was largely ignored. In stark contrast, the centenary of the massacre of the imperial family will be commemorated in 2018 by a huge ceremony to be attended by the Patriarch of the Russian Orthodox Church.

While the murder itself has received major attention, what has never been investigated in detail are the various plots behind the scenes to save the family - on the part of their royal relatives, other governments, and Russian monarchists loyal to the tsar. Rappaport refutes the claim that the fault lies entirely with King George V, as has been the traditional claim for the last century. The responsibility for failing the Romanovs must be equally shared. The question of asylum for the tsar and his family was an extremely complicated issue that presented enormous political, logistical, and geographical challenges at a time when Europe was still at war.

Like a modern-day detective, Helen Rappaport draws on new and never-before-seen sources from archives in the United States, Russia, Spain, and the UK, creating a powerful account of near misses and close calls with a heartbreaking conclusion. With its up-to-the-minute research, The Race to Save the Romanovs is sure to replace outdated classics as the final word on the fate of the Romanovs.

"Rappaport, a historian, turns the question of why European relatives and Allied governments failed to save Czar Nicholas and family into a thriller, full of juicy tidbits for Romanov completists." (Newsweek)

"Devastating, complex, and fast-moving.... This is a well-researched account of a colorful, suspenseful, and tragic series of events." (Publishers Weekly)

What listeners say about The Race to Save the Romanovs

Eastern Orthodox Christians will love this...

Eastern Orthodox will enjoy this because it shines a light on the sainted Romonov family and their last days where it seems that they were faithful to their faith and their country until the last moments.

The book depicts Tsar Nikolai as being clueless about the state of the people (he was, history has proven this) and his Empress as being the force (a negative and mean one) behind their rule. It is well researched and shows the tambour of the country and how the Tsar was ignoring the clues that he needed to get out of the country and take his family with him. The author shows the readers how there was a collective denial of the obvious by an Empress who felt that she and her husband had a right to rule, and kept their family insulated from the reality of a country that had just fought in a huge war and was suddenly faced with a civil war.

We learn that rescuing the Tzar had impacts on the other countries politically and why they were all passing the buck around as to whose responsibility it was, and why even his closest relatives would not help him.

I was quite eager to listen to this book and was so disappointed. Everything from the reader to the re-hash of stories and theories which offered very little in new information regarding the fate to the Romanovs. This is a fascinating and tragic story that has captivated generations of readers and somehow Ms Rappaport was able to make it a bore. how sad.

For Romanov and Russia afficionados

Having read several of Rappaport's books on the subject, I knew that I would enjoy this and it didn't disappoint. The author is so thorough in her historical research that the reader gets the full picture of what happened, who was involved, and the politics behind a possible rescue of the Romanovs. There were so many issues and machinations involved in the idea of rescue that it almost read like a thriller even though you know the outcome.

Enjoyed the book throughly. Love history and this gave me something that I enjoyed. Finding what year the king and queen of England changed their last name to “Windsor”. How the royals were kept blindsided that the Zar and his family were murdered. Could not stop listening.