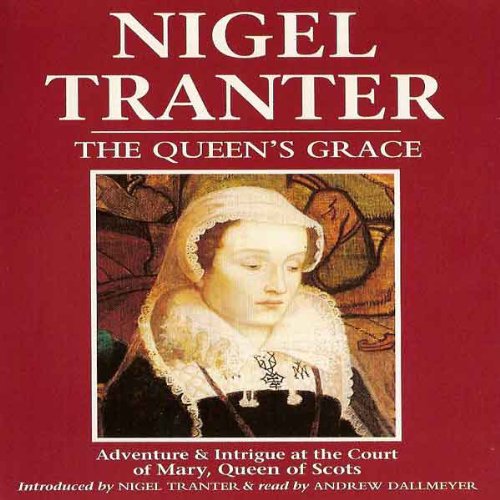 Set in the north-east of Scotland during Mary, Queen of Scots, visit in 1562, The Queen's Grace charts the adventures of Patrick Grodon of Balruary - a young highland laird who arrives at the Queen's Court only to be caught up in the web of deceit and treachery that surrounds the Queen, as two of the most powerful men in the land, the Earl of Huntley and Mary's scheming half-brother, Lord James Stewart, struggle to win control of the kindgom.

Abridged by Andrew Dallmeyer, The Queen's Grace, is a gripping story of deadly rivalry and bloodly conflict, evoking all the intrigue and drama that characterised the life and violent times of Scotland's most celebrated monarch.

What listeners say about The Queen's Grace

What other book might you compare The Queen's Grace to, and why?

Royal Mail, by the same autnor

Who might you have cast as narrator instead of Andrew Dallmeyer?

It would have made no difference because of the distorted sound

Could you see The Queen's Grace being made into a movie or a TV series? Who would the stars be?

"The Queen's Grace" by Nigel Tranter

The Queen Grace is very fine novel and story about the Mary queen it was his first novel to focus on an historical character in this case, Mary, Queen of Scots .Although it contained a high fictional content Events surrounding the life & times of Mary Queen of Scots. Mary Queen of Scots More than four hundred years after her death, Mary Queen of Scots remains one of the most romantic and controversial figures in British history.This is first of his historical novels was The Queen's Grace, about Mary Queen of Scots, and was inspired in part by his research into the architectural history of Scottish Castles. Marie de Guise ruled Scotland alone after the death of her husband James V. She foiled Henry Tudor of England's plans to marry her baby daughter to his son Edward and unite the two thrones under English rule by sending Mary to France. She kept the peace between Protestants and Catholics while John Knox was becoming a fiery power in the land. Beautiful, lively and clever, Mary Queen of Scots was welcomed back to the country of her birth after her mother died. But her troubles mounted with her disastrous marriages to Lord Darnley and to Lord both well after Darnley's murder. In spite of numerous plots against her, and even after her little son James was crowned king, she always believed that Elizabeth of England would help her. Trustingly, she set off for England - and her tragic fate. This audio book of historical fiction is well-researched and well-written and chock full of plenty of stuff I love to read about scholars and politicians exploring the way the world works?. Set in the north east of Scotland during Mary, Queen of Scots visit in 1562, this novel follows the adventures of Patrick Gordon of Balruary, a young Highland laird , who arrives at Court with an important message from his clan chieftain.