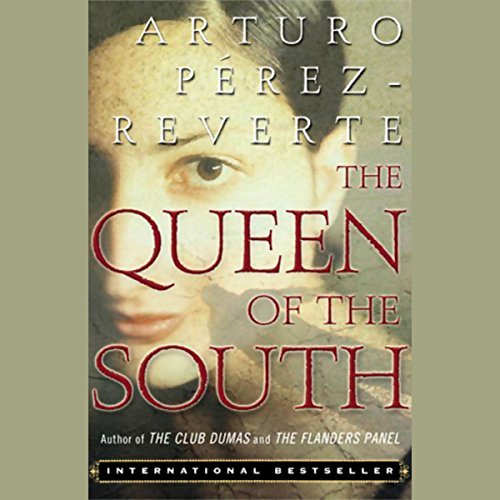 The Queen of the South

By: Arturo Pérez-Reverte
Narrated by: Lina Patel
Try for $0.00

Few authors inspire the kind of passion that Arturo Pérez-Reverte does. Reviewers, readers, and booksellers alike have embraced his fiction as the perfect blend of suspense and literary ambition. A global best seller, he is one of the most admired and widely read authors in the world. And his stunning new novel is his best yet.

A remarkable tale, The Queen of the South spans continents, from the dusty streets of Mexico to the sparkling waters off the coast of Morocco, to Spain and the Strait of Gibraltar. A sweeping story set to the irresistible beat of the drug smugglers' ballads, it encompasses sensuality and cruelty, love and betrayal, as its heroine's story unfolds.

Teresa Mendoza's boyfriend is a drug smuggler who the narcos of Sinaloa, Mexico, call "the king of the short runway", because he can get a plane full of coke off the ground in 300 yards. But in a ruthless business, life can be short, and Teresa even has a special cell phone that Guero gave her along with a dark warning. If that phone rings, it means he's dead, and she'd better run, because they're coming for her next.

Then the call comes.

In order to survive, she will have to say goodbye to the old Teresa, an innocent girl who once entrusted her life to a drug smuggler. She will have to find inside herself a woman who is tough enough to inhabit a world as ugly and dangerous as that of the narcos, a woman she never before knew existed. Indeed, the woman who emerges will surprise even those who know her legend, that of the Queen of the South.

"A frightening, fascinating look at the international business of transporting cocaine and hashish as well as a portrait of a smart, fast, daring and lucky woman, Teresa Mendoza." (Publishers Weekly)

"A thriller with an almost meditative tone, the novel's energy comes not only from the action scenes, which are expertly delivered, but also from the monologues in which Mendoza struggles with the multiple contradictions in her life. Many Perez-Reverte readers will be...drawn in by the author's remarkable eloquence and ability to plumb the recesses of a character's psyche." (Booklist)

What listeners say about The Queen of the South

What disappointed you about The Queen of the South?

A very long book, which seemed ten times its length thanks to the stultifying monotone of the narrator! It was one of the most robotic readings I've ever heard, and I listen to books continually. To add to the irritation, it's full of Spanish words, and about 40% of them were mispronounced. I cringed every time Don Epifanio's name had to be mentioned again-- epifa-NEE-o, as she interpreted it. Some repeated words got different pronunciations as she went along. Absolutely no characterization of the zillions of characters-- they might have all been the same person- with the exception of a couple of characters toward the end, who suddenly sported unplaceable accents. Just one of the worst audio experiences I've had! I would've given up after the first couple of hours, but I found the book itself unpleasant enough that I knew marooning myself in the car with it was the only chance I had of getting through it-- I was reading it for a bookclub. I do NOT recommend this performance-- and while I'm not a fan of the book, I wonder how much of my antipathy stems from the performance. If I were the author, I'd ask for it to be re-recorded with a superior narrator.

least interesting: endless descriptions of speedboats and motors and other technical things. Perhaps it was an homage to MOBY DICK's famous pages of whaling minutiae!

I fear that reader may be a hopeless cause. That sort of monotone in an adult doesn't just go away! however, she, or a director, could've made sure they at least got all the Spanish right.

Bitter disappointment! Also, irritation at the number of hours squandered listening to it.

The story is excellent, I love this author and have read several of his books, however the narration on this particular book was beyond bad. The narrator's pronunciation of the Spanish words made it impossible for me to listen to, I wouldn't expect excellent pronunciation but this was just horrible. I never finished it, I bought the book and read it. I would not recommend the audible version.

Sorry I ever listened to this in translation. The narrator was absolutely the worst. Not even close: a bracelet worn by La Reina is made of "centenarios," a centennial coin. The narrator called them "seminarios" (seminaries!) throughout. She appears to think if she gives it a bit of "flair" it will sound good. It would be laughable but for the fact I assume this person is a professional. I could have done it better in my sleep.

I loved the story, but it was absolutely frustrating to listen to the butchered Spanish.

It's hard do you understand how the author came to some of the descriptions of Teresa Mendoza. However, the story is so fascinating. My only negative comment is that the story is told from the point of view of the male author and read by a female. It underscores the dichotomy of woman's point of view man's point of view, a theme that is throughout the story. One of the interesting aspects of the story is the independent minded lead character. It feels as if her strong personality and notorious behavior overshadow any other characters. Perhaps that is true with life, when there is a strong woman. The men in her life fade. It is interesting to see how the author piece together the transactions and the flow of drugs and money. It is also fascinating to see the growth of the business at the time. It is easy to understand why, and Mexico's current culture, this has become such a lightning rod. Obviously, the character of Teresa is far removed from the average woman.
The way that the story is told the auto pays close attention to creating suspense riveting attention not boring with details and bringing a whole lot of personal intuitive knowledge of the characters to make the story so interesting. It is also quite the path, from the young girl to the woman at the end of the story. It is a fascinating book

Fascinating Life of A Woman Trafficker

The character portrayals are rich and colorful. The action is plentiful and exciting, but the detailed descriptions of the inner workings, methods and 'protocols' of drug and contraband trafficking are truly impressive. The personalities of the main characters felt 'real' psychologically, especially Teresa, the trafficker despite herself. The story kept me involved right to the end. I need to find more by this author!

What did you love best about The Queen of the South?

Love Theresa, she is an amazingly smart woman. Also liked her relationship with the Russian.

Have you listened to any of Lina Patel’s other performances before? How does this one compare?

No, and she did great.

Love the story. Kept me hooked .Would love it if they had more books about her.

what a wonderful book it never stopped being excit

Loved it. Kept me interested til the very end.
the intricacy of how they moved the drugs and the learning that she had to do was admirable.