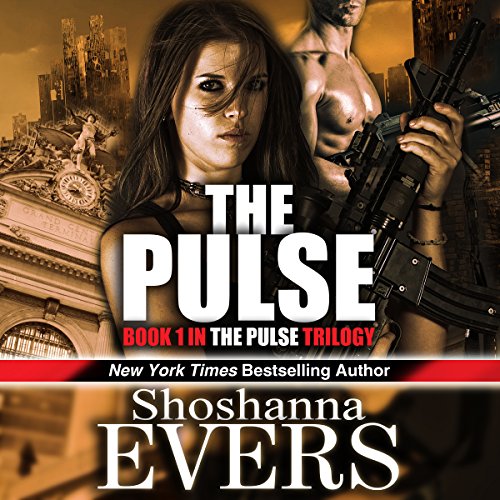 By: Shoshanna Evers
Narrated by: John Lane
Try for $0.00

Emily Rosen lives in a military camp at Grand Central Station, where women sell their bodies to soldiers for extra rations. When she discovers a dark secret - that America is rebuilding outside of New York City, and everything the city's refugees have been told is a lie - she escapes, the soldiers hot on her heels...

But Christopher Mason, a convict who broke out of prison after the Pulse, finds Emily first. Although he's survived this long on the streets by looking out only for himself, Emily is beautiful, alluring, and impossible to leave behind.

Now Emily must convince this intimidating, magnetic stranger to be her guide as they journey out of New York and into the unknown. She'll barter with her body, but sex with Mason can never be currency - it's pure passion, and everything she desires. Despite the crumbling world around them, can Emily and Mason discover true love blooming in the darkest of places?

5 Stars! "I was on the edge of my seat the whole time reading this and I love books that capture my attention so fully. I highly recommend this book to lovers of post-apocalyptic tales with great storylines and hot sexual chemistry!" (Booklover Sue)
4 Stars! "dark, intense and gritty. Definitely an eye-opener to what may happen in the future. The harsh realities of their everyday lives were brutal...it was easy to believe that women were subjugated and forced to eventually barter their bodies for sex to survive..." ( The Jeep Diva Reviews)
"Intense, exciting, and sizzlingly sexy - a perfect post-apocalyptic romance!" (Heather Thurmeier, best-selling author of Escape to My Arms and Stuck on You)

What listeners say about The Pulse

I am hooked. Thank you for writing such a gripping story. It is amazing. smiles

Yes! I would DEFINITELY recommend it because the narrator's deep masculine voice added to the genre of story Shoshanna wrote. Didn't realize how much more value his read added to this post-apocalyptic dystopian genre until I heard him. He's the perfect narrator--as if the story was made for him to read aloud!

What was one of the most memorable moments of The Pulse?

The scary parts were the most memorable, when the main protagonists were on the verge of getting caught. I guess that tells you how convincing the narration was!

Have you listened to any of John Lane’s other performances before? How does this one compare?

This is the first time I've heard John Lane's performance and I am VERY impressed. He paused at the right times. He characterized the cast well, even the minor characters that were sprinkled throughout the book.

Yes, I wanted to listen to the whole book in one sitting, even though I had to block off a good several hours.

So glad that John Lane could narrate the complete box set of the Pulse Trilogy!

Would you try another book from Shoshanna Evers and/or John Lane?

I would try another book from Shoshanna Evers.

Would you recommend The Pulse to your friends? Why or why not?

No, I would not. I felt the book was boring.

Who would you have cast as narrator instead of John Lane?

I would have casted Susan Erickson, she's my favorite :)

Was The Pulse worth the listening time?

Yes, it was. The Pulse was okay, but it wasn't great or bad.