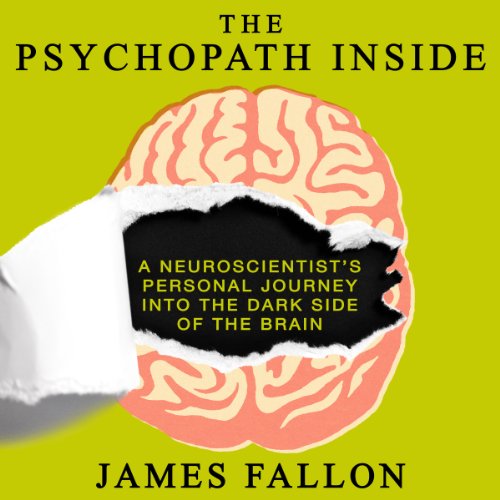 By: James Fallon
Narrated by: Walter Dixon
Try for $0.00

The memoir of a neuroscientist whose research led him to a bizarre personal discovery, James Fallon had spent an entire career studying how our brains affect our behavior when his research suddenly turned personal.

While studying brain scans of several family members, he discovered that one perfectly matched a pattern he’d found in the brains of serial killers. This meant one of two things: Either his family’s scans had been mixed up with those of felons or someone in his family was a psychopath. Even more disturbing: The scan in question was his own. This is Fallon’s account of coming to grips with this discovery and its implications.

How could he, a happy family man who had never been prone to violence, be a psychopath? How much did his biology influence his behavior? Fallon shares his journey to answer these questions and the discoveries that ultimately led to his conclusion: Despite everything science can teach, humans are even more complex than we can imagine.

“As comprehensive as it is compelling, essential listening for understanding the genetic and neuroscience underpinnings of psychopathy.” (M. E. Thomas, author of Confessions of a Sociopath)

What listeners say about The Psychopath Inside

This felt like an overly self-congratulatory essay on how evolved and superior the author is due to his self diagnosed psychopathy. A pompous and vapid autobiography that hardly lends itself to real scientific discovery of the human brain.

Entertaining story with some quick neuroscience

The book itself is interesting on several levels. It tells the story of a successful Professor who stumbled across the finding that his brain resembled those of psychopaths and serial killers. In researching himself he also discovered murderers in his extended family tree.

The underlying neuroscience of psychopathy was presented in lightning fast speed that was hard to follow in the audible version, even for someone like myself who is a physician. I ended up buying the printed book so I could reread those sections and look at the images and diagrams.

Professor Fallon's personal story was fascinating if more than a trace narcissistic. I also had the sense that he greatly minimized some of his peccadillos in the middle of the book while alluding to greater indiscretions toward the end.

The subtextual question of nature versus nurture runs through the book. Professor Fallon's bias is toward the nature explanation, stating that 80% of who we are is determined by our inborn biology and the structure of our brain. At the end he does leave the door open to the possibility that it was the nurturing tolerance of and containment of his youthful adventurous escapades by his understanding parents that shepherded his psychopathic brain into a productive life with only minimal misbehavior.

This is a fun book to listen to for an aerial view of the topic. It will be sufficient for most readers. The more serious student of the topic will need to pursue it elsewhere but this is an entertaining start.

I found Fallon at times the slightest bit self-indulgent (should we expect otherwise, given the theme?), but, for the most part, this is an interesting and entertaining book. If you want something more serious and scientific, read Without Conscience or The Science Of Evil, but this book serves nicely for an up-to-date primer for the neurology of psychopathy, and it also serves its purpose well: the story of one man's dealing with the realization that he has the brain structure and innate tendencies of the very people he has been studying for years: the psychopath.

Unfortunately, I didn’t. The author is obviously much more intelligent than me. I usually enjoy reading and learning about the brain, but this book was just boring to me. Others might like it, but I think I wasted a credit...

Powerful due to unlikable first-person perspective

What distinguishes this book from others is its first-person perspective - on occasion, you realize that the guy talking to you is, in fact, a psychopath. With the behavior, the narcissism and the expectations of one.

That he can explain the workings of the brain as an expert provides a valuable theoretical backdrop. But this book stands out because we start out rooting for the author because we are embarking on a personal journey with him, until his choices leave us disappointed over and over again - just like we are dealing with a psychopath.

If you are interested in the subject matter, do not miss this book.

brutal, and not for everyone.

the book is full jargon that isn't necessary to absorb the book, but it makes sense that the author would add all of it.

So given the content of this book, I wonder which is more true of the above question? I do think it's a little bit of each but, nevertheless, a fascinating portrait of a man at the interface between psychiatry and neuroscience by the author/artist, who as a neuroscientist himself, embarks upon a journey of self discovery and self redemption. What kind of 'artist' this author really is will be left up to the listener to decide at the conclusion of the book. I found myself, as a physician and scientist myself, either despising this man or feeling pity for him and his family yet applauding his abject honesty concerning his behavior over the years toward friends, family, and colleagues that he describes while correlating this with his neuropsychiatric genetic predisposition. A fascinating look into how the structure and function of the brain and it's neurochemical pathways help make up our moods and personalities with Dr. Fallon as guinea pig central.

It’s a good book. Thank you for moving awareness forward. Too many psychopaths don’t care about our perception, which is why it is so poor. This is a step forward

Jaw dropping! But an amazing read!

After hearing this wonderfully fun, insightful, scary book, the question that lingers is: Who is his wife?? Wow! The woman has the patience of a saint!

Now, because I've just spent two years in a relationship with a man who has the same kind of brain that James Fallon has, I have personal experience at how "trying" it can be! I have read all the "Psychopathy" books, and found them okay, except that they demonized the "disorder." They encouraged me to delete this man from my life. Completely. "No Contact!" They all screamed at me.

I tried, but he wouldn't let me go... (just as those books predicted!) And I couldn't delete him from my brain or my heart no matter how hard I tried! No matter how bad I knew he was for me. And it really pissed me off! ;^)) Because he's impossible! But he's also funny, smart, charming - like so many psychopaths!

So I wanted to find a way to "understand" what was going on with him, and James Fallon's book gave me exactly what I needed. Fallon explains the brain structures that compel the person (usually male) to be an extreme thrill seeker, drinker, druggie.. and many other lovely "anti-social" things that even James Fallon won't describe. Be that as it may, the take-away from this book is that "his brain" is needed in our species's DNA mix. And I think he's right.

He's given me another way to deal with the "personality disorder" that I love. Now, I can decide what I want to do with him from a less charged and far less judgmental perspective. I know he will never change. All I needed from the relationship was to learn to love unconditionally.

James's wife, who's known James since he was 12, must have an over-soul who reminds her of his inner goodness. Learning to love someone unconditionally is more difficult than people realize. James's wife has done it! I doubt that I have the same patience.

Will the Real James Fallon Please Stand Up ?

In reading many, many books on this subject I did find answers to many of my already perceptions of Character Disturbances, yet this book brought me to a more practical application of those personal experiences with Narcissists, Sociopaths and then Psychopaths. What I sensed in listening to this book was a sense of more jargon with more wit, humor and, explaining away his lifetime behavior and the effects he has had on primarily his family. Example/forgetting his grandson could have been deadly had he left the child in a car in the summer living in California. No amount of explanation could have resolved such callousness towards someone whose been left in his care! It totally undermined his “Brilliance” as a whatever titles he has gained. He lacks the basic instincts to be human and only uses these traits artificially to gain Success and now Notoriety. I was raised by someone like him and strive to stay completely away from his kind. The fact that you don’t want to piss him off because of the Long Term effect this can have on his “Getting Even”! These people should NOT Breed and I don’t buy the Notion that Faith did not suit him as he used everything and everybody at his disposal to get to the place he is without ever giving a damn. This book was his Legacy to explain not to Society but to his Family that regardless of his Life and Lifestyle, he’s still a Good Guy. I would be in the Camp of weeding him out of my life forever. You have left no hope for families who marry or have you in their family Mr Fallon. To me you are a Fallen Angel or Wolf in Sheep’s Clothing masking as Human. You are Diabolical and Dangerous because without a conscience or remorse you could snap at any time, you are a Ticking Time-bomb and only time will tell. You care about nothing and are enjoying more people in your life due to your confession. I don’t buy that someone with your attributes didn’t always know what you are and so did your Mother, it is Generational. You only use people as play toys and I find that Pathetic, someone who lives his life without a Soul is not someone to befriend. I pity you in your success because you define Psychopathy as somewhat Normal and it’s Not! Now have confirmed to me that your kind can Never be trusted, Ever! And sense you don’t care what people think, then you can just place my opinion in file 13.