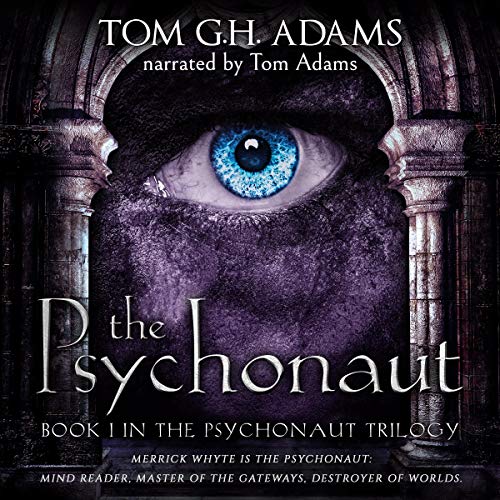 How would it change your life if you knew what everyone else was thinking?

Merrick Whyte has used such a talent to profit from the world of high finance and business mergers. He puts it down to psychology, the study of body language and good background research.

But the game is about to change. Someone is seeking his skills for a different purpose - one that leads him into the clandestine world of the occult.

After falling foul of the law, he learns that discerning between friend and foe is not an easy task, especially when reality gets turned upside down. As he discovers the true extent of his psychonautic talents, he struggles to keep his enigmatic girlfriend, Lotus from being sucked into a conflict that spreads to Eastern Asia.

In an apocalyptic convergence of events, only Merrick and his Outcasts stand between a powerful enemy and the ultimate prize - dominion of this world and the realms beyond the Gateways.

What listeners say about The Psychonaut

The rise of the Psychonaut

I was given this free review copy audiobook at my request and have voluntarily left this review. It was a great and entertaining listen. As the story progresses more and more characters are added and introduced. There are some twists and turns, some changes of allegiance and lot of magical combat. If I were to note one negative point, it's that I felt the world could do with a little more building and some more backstory for the characters. The magic is also soft in structure, lending to many deus ex maquina moments when the power of the psyconaut saves the situation. I'm intrigued in what Demonslayer will ad to the series. Recommended.

I would categorized this book as Urban Fantasy. The author develops a wonderful universe with parallel planes. The "good guys" seem like real people, with their own faults and cruelty. The "bad guys" also seem like real people, not necessarily evil as more power hungry. There is no clear line between good and evil in this book and I think it captures reality better this way. There is violence and sex, so it is for a mature audience, but none of it seemed forced into the story for the sole purpose of having sex and violence. Overall I think this story is well thought out and complex, a good read/listen for Urban Fantasy junkies.

This was a fairly unique and interesting urban/dark fantasy story. I found the premise interesting and liked the world building and character development the author does. The book is a little slow at times but is mostly entertaining and a good listening experience.

The torture scene at the very beginning of the book was a surprise. But if you keep reading the book keeps your interest and is not at all what you expect. The action's pace is fast which I enjoy. It's about Merrick who has a third eye that he uses to his benefit. The book is full of twists and turns. If you like the occult, thrillers, paranormal, then this book is for you.

The narration was very good.

A review from someone picky about urban fantasy

I am very picky about urban fantasy. There are many that I give up on and I will say that this one was intriguing. It had a dark edge from the very first scene, which kept me engaged. However there were some developments with a few of the characters, especially the inexplicable girlfriend, which I didn't like. Also, be prepared for many, many characters with "mysterious" slash foreign accents, all of which are executed fairly well. The narrator is talented and has a smooth voice, but all of the foreign accents became somewhat interchangeable to me after many hours into the book.

I wasn't in love with the main character and it really made no sense why his girlfriend remained with him after a certain point.

There was also at least one dead spot in the recording unless my app is very, very buggy. It means I didn't hear the entire last minute and a half or so of chapter 11 and while I can guess what more or less happens, that wasn't so great. (ETA: The narrator contacted me and fixed the dead spot in the recording after this review, but I could not edit the review til now.)

This book started out slightly boring then really picked up the action, violence, 3rd eye, different parallels and some humor. I really enjoyed the character of Merrick and his abilities in this twisted dark fantasy as well as some of the crazy creepy characters. Recommend if you enjoy unique fantasy. I was given this free review copy audiobook at my request and have voluntarily left this review. Thank you

I fell right in the middle on this book. I wasn’t sure how I felt about it and I took a couple days after finishing it to write my review hoping that I could wrap my head around whether or not I liked the book. First off, as other reviewers have said – I would classify this book as Urban Fantasy. This is not a genre that I read a ton of so I am not even close to an expert in what to expect from it – but I did enjoy some of the mystical and non-normal parts more than I expected.

Adams had an ability to draw me deep into this book and then proceeded to lose me. This happened numerous times in the book – the opening scenes are graphic and I was like, well what the heck am I getting into (in a good way) – then the book slowed down again, picking back up later. The up and down for characters, pacing, and all things Psyhonaut is one of the reasons I’m on the fence with this book.

I did read this book from beginning to end and I did find myself thinking about it after – so that’s a win in my book. But the entire book itself felt like it was missing something and I cannot put my finger on exactly what was missing

The character development in The Psychonaut is another thing that I’m on the fence about – some of the characters that I was supposed to like I found myself thinking, why are other people around him? He’s kind of a terrible person.

Unfortunately, as I stated earlier – Urban Fantasy isn’t always my cup of tea and I’m no expert – so my advice on this book should definitely be taken with a grain of salt. I enjoyed parts of it and didn’t enjoy others. I think that some people would like this book while others would find it bothersome. I don’t know which camp you’ll fall in but if you read this book, let me know what you thought.

The narration of this book was pretty good. There were scenes that I found myself not really able to discern certain accents but it didn’t take me out of the book like it can sometimes.

I was voluntarily provided with a free copy of this book. It has not affected my review in any way. If you enjoyed this review, please vote for it! Every vote helps.

Why does the narrator sound like he's talking quietly in case he wakes someone up? Why do the characters seem to have speech impediments? When one character has his throat cut another quietly asks for an ambulance to be called. Most people would be screaming. Shame as its a promising story.