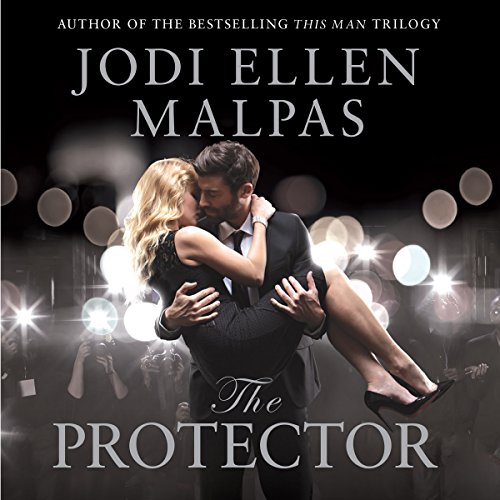 A new stand-alone novel from Jodi Ellen Malpas, the best-selling author of This Man and One Night trilogies.

People think they have Camille Logan nailed: Daddy's girl, beautiful, spoiled young woman with her father's bank balance to fund her lifestyle. But Camille is determined to have a life free from his strings.

Out on her own, she's made mistakes, including one that found her clawing her way back after a stint in rehab and plenty of bad press. Now, after fighting so hard to be independent and happy, she finds her life threatened as a result of her father's ruthless business dealings.

Caught between resentment and fear, Camille prepares herself for the measures her father will take to protect her. But nothing could prepare her for the ex-SAS sniper who crashes into her life.

Jake Sharp resides in his own personal hell. He was distracted from duty once before, and the consequences were devastating - both personally and professionally. He vowed to never let that happen again. Accepting the job of bodyguard to Camille Logan isn't the kind of distraction from his demons he should take.

Women and Jake don't mix well, yet protecting the heiress seems the lesser of two evils. But Jake soon discovers that she isn't the woman she's perceived to be. She's warm, compassionate, her presence settling, and his duty to protect her soon goes deeper than a well-paid job, no matter how hard he fights it. He needs absolution. He comes to need Camille. But he knows he can't have both.

What listeners say about The Protector

Hard to believe it is the same writer.

The clichés are raining down in every other exchange between the characters. The narrators way of reading the heros lines is hard to take seriously. The same goes for the female narrators choice to emphasize on stupid places and with "dreamy and breathy" voice at places that make the heroine look more stupid and entitled than she needs to.

Having a hard time believing it is the same writer that wrote This Man. It is like night and day. This is cheesy af. That was at least filled with humour in the light of all the craziness. SAVE your credit, read it instead.

I was really looking forward to the release of this book on Audible. Unfortunately it's not a patch on Jodi's previous works. The storyline was ok but slow in quite a few places. I wasn't in a rush to listen to it and left a while before going back to it. The narrators are awful. Jake's voice is forced and trying to be overly manly with the constant use of the F-word. Camille's voice doesn't match the age of the character and sounds too mature and the long drawn out pronunciation of some words is just irritating. Let's hope her next books have different narrators. Sorry Jodi but this wasn't your best!

I loved This Man and the One Night
series that I have listed too many times to count , but the female narrator has absolutely killed this book for me she is so wrong , her voice is to old and whilst she tries to put feeling into her performance it really does not work to the point that I have returned it for a refund I find it that bad plus the story is lacking can't get into it at all I will purchase an Ebook when it gets reduced to finish ,
Sorry Jodi I was so looking forward to it

I am such a fan of audible and this is my only negative feedback in 2 years of listening.

I am not sure if it was the narration or story or both, but just not my cup of tea. I found this to be quite dreadful . Think I'll stick with Diana Gabalden for a while, Philllipa Gregory or Mary Janice Dickinson :)

Just love listening to jodi’s audio books, there just brilliant, keep you on the edge of your seat

absolutely brilliant , totally gripping, took me on a range of emotions, could listen again

Annoyed somewhat as I was really looking forward to hearing this story but sadly the female narration was appalling. She spoke as if there.was.a.full.stop.after.each.word. Such a shame as the male narrator was spot on. All the other Jodi Malpas books are great to listen to.

I wish I had paid closer attention to the reviews before getting this book. The narrations, especially the female, are gd awful! She speaks in a staccato/fake/cringeworthy voice. To be honest I couldn’t bear listening to 14 hours of this so quit halfway. Will consider trying another of this author’s books but will make sure that the narrator, especially the female, is not performing.

WHAT CAN I SAY ABOUT THIS BOOK AND JAKE SHARP. HE IS MINE. HE HAS TO BE MY FAVOURITE ALPHA FROM JODI'S MEN. A MAN WITH A HAUNTING PAST BUT FIERCE DETERMINATION FOR HIS JOB. SOME TRULY HEARTBREAKING SCENES. JOB WELL DONE ON THIS BOOK CANNOT WAIT FOR MORE.

I had been reading this story on my kindle and was very into it.
I switched to audiobook so i could listen whilst driving, travelling to work and whilst working.
I wasn't sure about the narrator for Jake's part of the story as it wasn't how I had imagined him to be/sound. I stuck with it as i wanted to complete the book and I am glad I did 🙂

This is a great story and well worth the listen. I fell in love with Jake straight away and loved his story. I didn't guess who it was and I didn't see the twist in his past. Jodi Ellen Malpas is one of my favourite writers

A book full of actual numpties

I can’t rate these characters any lower, but I would if I could. Jake Sharp is one big, overgrown man-baby who has no emotional maturity, sense of professionalism, or general know how of being a decent human being. And Camille Logan? My goodness, talk about a lack of character development. She genuinely does not make sense. Sure, Jake gets aggressive and irritated at practically everything, but Camille doesn’t get upset when she should (like after traumatising events), but gets upset over stupid, petty things. This book is actually mind-boggling bad and I don’t know how anyone ever thought otherwise.

There’s no character development at all and all the characters are actual numpties.

The best character is Abbie, followed by Charlotte- but we only see about two minutes of them in the whole thing.

Narrators: I’ve never heard ANYONE narrate (or speak) as slow as Alexandra Baldwin. I genuinely had to listen to her on 2.0 speed, sometimes 2.2.

Overall, I highly recommend you do NOT waste your money or time in this audiobook or the shockingly laughable story.

A good yarn. How a damaged sniper, who carried so much guilt found love again. A rich father, who tried to control everything, lost it all. A beautiful women, how tired them all together.

Narrator put me off

Didn't finish the book. Found the narrator very monotone. The story was ok but couldn't get past the tone or lack of enthusiasm coming from the narrator, quite annoying really.

This was a great read of romance and intrigue. Loved that cami pulled Jake form the dark and into the light. Loved the intrigue of the blackmail. Didn’t see that twist. Narration was awesome too.