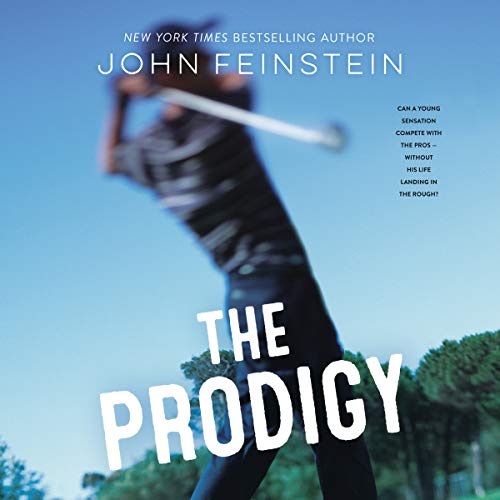 From award-winning sportswriter John Feinstein, The Prodigy is a YA audiobook about a teen golfer poised to blaze his way into Masters Tournament history - and he’ll face secrecy, sacrifice, and the decision of a lifetime to get there.

Seventeen-year-old Frank Baker is a golfing sensation. He’s set to earn a full-ride scholarship to play at the university of his choice, but his single dad wants him to skip college and turn pro - golf has taken its toll on the family bank account, and his dad is eager to start cashing in on his son’s prowess. Frank knows he isn’t ready for life on the pro tour - regardless of the potential riches - so his swing coach enlists a professional golfer turned journalist to be Frank’s secret adviser.

Pressure mounts when, after reaching the final of the US Amateur tournament, Frank wins an automatic invite to the Masters. And when the prodigy, against all odds, starts tearing up the course at Augusta National, sponsors are lined up to throw money at him - and his father. But Frank’s entry in the Masters hinges on maintaining his standing as an amateur. Can he and his secret adviser - who has his own conflicts - keep Frank’s dad at bay long enough to bring home the legendary green jacket?

What listeners say about The Prodigy

With all the real names used I thought it was real most of the time. It was a little hokey the way Frank played sometimes but overall it was a very good book. It only took me 3 days to finish it. Very enjoyable!

Couldn't put my phone down, had to keep listening. Great book, good ending. NEED A SEQUEL!

another home run from John feinstein!

loved the story. the book is a great read and john feinstein does a good job.

Interesting and engaging story especially for golf nuts and players. Competitive players will really appreciate the details and storyline.

Not only is this a nice story, but it’s well written by someone who clearly knows the game, the players, and how it really is on the TOUR, at Augusta National, and about everything else he includes in his writing. Of course the story has a fairytale nature, but it includes many realistic intricacies.

Feinstein ought to give it up. One of the most predictable and uninteresting books ever. He should not narrate makes it even more boring.

a bit predictable but....

Too many parallels to Tiger's life as a budding star with a controlling parent. Insight into golf makes it a worthwhile listen for golf fans. am wondering if Feinstein fancies himself as the protagonist, Keith Forman, in this story?