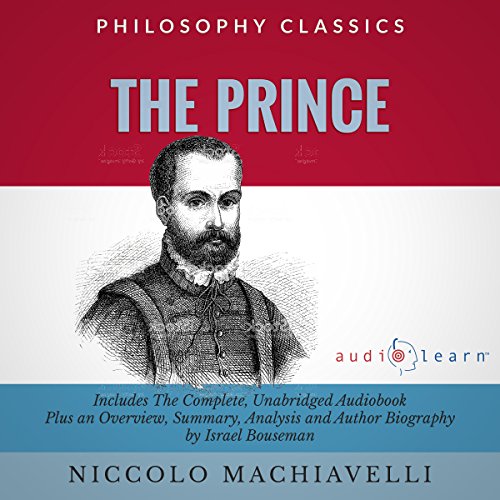 The Prince by Niccolo Machiavelli

By: Israel Bouseman,Niccolò Machiavelli
Narrated by: Doug Eisengrein
Try for $0.00

The Prince, is the best known work by Italian diplomat, Nicolo Machiavelli. It is, in essence, a manual for rulership. The Prince, was a distinctly original work, written in the late Renaissance, and characterized by a realistic, perhaps even ruthless perspective, of both human nature and politics. It inspired the term "Machiavellian", and brought it into common use to describe unscrupulous politics. Machiavelli is seen as the father of modern political theory. His perspective in The Prince reflects a unique insight into human nature, and the nature of statecraft, offering clear, and powerful instructions for anyone in the field of politics, from the Renaissance to the modern era.

The audiobook version of The Prince, is prefaced with a biography of the author and a background of the work itself, shedding some light on the mind that produced it, and the era which shaped his perspective. Also included are an overview, synopsis, and analysis of the work. The summary is capped with a brief look at the historical context of Machiavelli's work, as well as the criticisms it has evoked, and the impact he has had on society. This is an ideal work for those interested in history, politics, or sociology, a unique and useful work, which offers a plethora of instructions for dealing with power on any level.

What listeners say about The Prince by Niccolo Machiavelli

Good Insight Into the Minds of the Time

I read that he wrote this as a 'resume' to get a job with a Prince (he didn't get the job - too much 'thinking' I would imagine).

Not only is there the famous cynical Machiavellian advice on how to survive in a nightmarish era of utter brutal ignorance and cluelessness, but there is a lot of fascinating history here for the modern reader.

Interesting enough translation of the classic text on princes, with a biography of the author as well... However, the obvious mispronunciations of the Italian words didn't help, and somehow I never got into it and felt I was waiting for it to end...