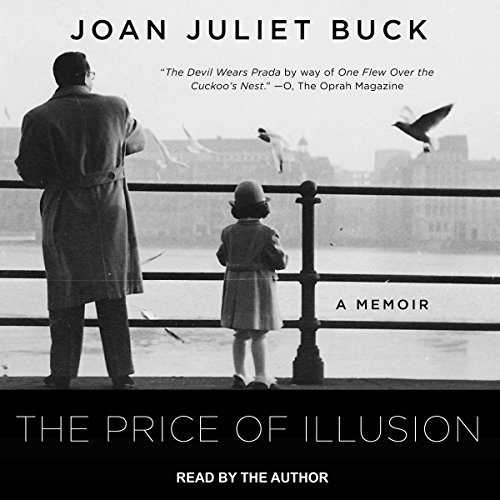 The Price of Illusion

From Joan Juliet Buck, former editor-in-chief of Paris Vogue, comes a dazzling memoir: a fabulous account of four decades spent in the creative heart of London, New York, Los Angeles, and Paris, chronicling Buck's quest to discover the difference between glitter and gold, illusion and reality, and what looks like happiness from the thing itself.

Born into a world of make-believe as the daughter of a larger-than-life film producer, Joan Juliet Buck's childhood was a whirlwind of famous faces, ever-changing home addresses, and a fascination with the shiny surfaces of things. When Joan became the first and only American woman ever to fill Paris Vogue's coveted position of editor-in-chief, a "figurehead in the cult of fashion and beauty," she had the means to re-create for her aging father, now a widower, the life he'd enjoyed during his high-flying years, a splendid illusion of glamorous excess that could not be sustained indefinitely.

Joan's memoir tells the story of a life lived in the best places at the most interesting times: London and New York in the swinging 1960s, Rome and Milan in the dangerous 1970s, Paris in the heady 1980s and 1990s. But when her fantasy life at Vogue came to an end, she had to find out who she was after all those years of make-believe.

What listeners say about The Price of Illusion

This book has no purpose other than to guide you through the life of the author a day at a time dropping names of every famous person she has ever known, slept with, saw in a magazine. There are pages of names you have never heard of. According to her, she is always right, always the most glamorous, always the belle of the ball. If you are looking for the perfect example of narcissism run amok, this book is for you!!! Otherwise it is a yawner of names, places, fancy clothes and all the shallow accouterments of a self-focused life. This woman wonders why she can never have a meaningful relationship with a man who is not married or otherwise unavailable.....gee, she is such a big presence in her own life there is no room for anyone who could stay. Skip this book, it is written only for the author.

The epic adventures of a father-daughter team (mom is on the sidelines, being beautiful) navigating the magic, treachery and dangers of movies and fashion, from Hollywood to Paris to London, and all over. This book had me laughing one minute ( those descriptions of the crew at Vogue, OMG) , scared the next, (what's with the ghost in the Paris apartment ?) moved a few pages later (the death of the beautiful mother, the strange fate of Ricki the fairy godmother). And the men! How did she get those men? Why didn't she want to keep any? How did they feel about being in this book? I was constantly entertained and wanted it to go on, and on-- there have to be many more stories she didn't tell. Yes, it's very cis-gender. (Most of it takes place in the 20th century) But it's also about the power of transformation, how you can make magic but you need love to ground a life. The author ( an actress as well as a writer) does the reading, and you feel like she's giving you her heart. You could say it's about what happens when you set out to reverse the bad things that broke your father while leading a fancy life you can't afford. About becoming the least-likely ever editor in chief of Vogue (that's Paris Vogue), or about being labeled a drug addict when you're not.The crazy paradoxes in this book make it the most fun and the most surprising I've ever read (or heard ) , absolutely unlike anything else EVER. Except maybe Harry Potter, except she's a woman and it's true.

One of My Favorite Audiobooks Ever

Not only was this book perfect, I’m going to listen to it twice. Amazing life, even more amazing person growth.

Beyond the fashion aspect of her life, Joan is .... a very talented writer , I didn’t want it to end.🥿

Beware, author narrates, which, after understanding the impetus of this book, is unsurprising since everything all the time must be about her, being seen, being heard, even drawing out her ‘perfect’ French accent to a sickening degree. After almost quitting early on, I hung on in hope that it would redeem itself; no such luck, as she explores the meaning of her life being wasted by Vogue and it’s superficial people, content, and lifestyle, apparently not understanding most readers don’t care or haven’t even heard of many of the names she dwells upon.