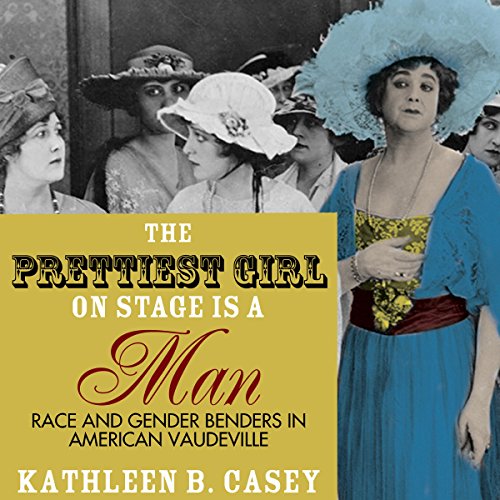 The Prettiest Girl on Stage Is a Man

By: Kathleen B. Casey
Narrated by: Lee Ann Howlett
Try for $0.00

In this lively and enlightening study, Kathleen B. Casey explores the ways in which the gender- and race-bending spectacles of vaudeville dramatized the economic, technological, social, and cultural upheaval that gripped the United States in the early 20th century. She focuses on four key performers. Eva Tanguay, known as "The I Don't Care Girl", was loved for her defiance of Victorian decorum, linking white womanliness to animalistic savagery at a time when racial and gender ideologies were undergoing significant reconstruction. In contrast, Julian Eltinge, the era's foremost female impersonator, used race to exaggerate notions of manliness and femininity in a way that reinforced traditional norms more than it undermined them. Lillyn Brown, a biracial woman who portrayed a cosmopolitan black male dandy while singing about an antebellum southern past, offered her audiences, black and white, starkly different visual and aural messages about race and gender. Finally, Sophie Tucker, who often performed in blackface during the early years of her long and heralded career, strategically played with prevailing ideologies by alternately portraying herself as white, Jewish, black, manly, and womanly, while managing, remarkably, to convince audiences that these identities could coexist within one body.

The book is published by The University of Tennessee Press.

Both book and narrator are first rate!

I enjoyed this book very much. It is published by The University of Tennessee Press, so that was a plus for me since my blood runs deep orange. Then it turned out to be even more interesting than I had hoped.

Casey covers Vaudeville from around 1912 through the early to mid 20's. Specifically, the book covers how male and female impersonators and Vaudevillians of color were perceived. I learned quite a bit from the book.

Lee Ann Howlett is the narrator, and she does a wonderful job. Of course, since this is non-fiction history there are no voices to perform, but after listening to this book for over seven hours, I can honestly say that her voice just seems right for this book. I can see myself listening to more of her books in the future. Don't know how she would with fiction, but her non-fiction is wonderful.

I received this book from the narrator in exchange for an honest review.