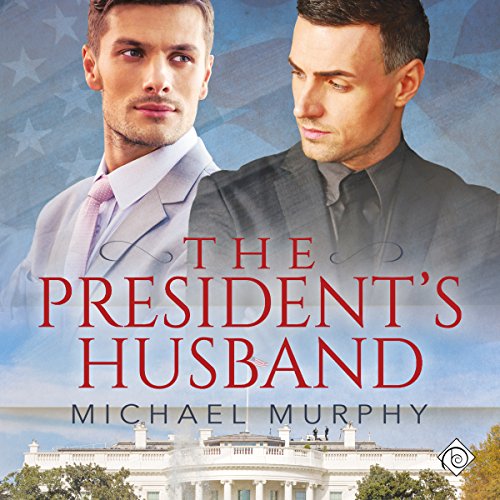 By: Michael Murphy
Narrated by: Randy Fuller
Try for $0.00

When an assassin's bullet strikes his predecessor, Grayson Alexander becomes the first openly gay president of the United States and his husband, David Hammond, becomes the first openly gay First Husband. With their world turned upside down, David relies on his career as a medical school professor and ER doctor to keep him grounded. But his decision to keep working ruffles feathers from day one.

Gray throws himself into learning everything he needs to know to be president, especially a liberal president surrounded by a conservative cabinet and staff. Even though he puts in outrageous hours working and traveling seven days a week, month after month, he's happy. But David has trouble coping with Gray's new job requirements. He can't help but feel abandoned by his husband of 10 years.

When Gray asks for his help with a public-health crisis, David obliges, but he is furious about what happens once the emergency passes. When they learn that the president's staff has manipulated them both, they wonder if their relationship can survive the White House.

What listeners say about The President's Husband

Interesting take on the Oval Office

The blurb really does a good job of setting the scene. The President is assassinated ad the VP is forced to move into his job, when, in reality, he NEVER figured on being President. Gray is young and relatively new to politics. He’s quite liberal and hasn’t done a lot of the long haul grind on the Hill. When he signed up to be the liberal counterpart to his conservative running mate, he never figured it would mean that he’d have to run the nation one day.

The President is killed on Inauguration Day! So Gray has no time to learn the ropes. He and David, his husband, are pulled into the tide of an urgent country in crisis and it sweeps them away for the first several weeks and then into months.

David never signed on for the job of Political “Wife”. He’s a professor and an MD and he has no intention of giving that up.

At first things are hectic but reasonable, then things go wacky and David and Gray are divided both physically and emotionally.

Eventually something’s got to give and David makes the call to seek separate housing until things settle down.

Will that be the end of their relationship or the wake-up call Gray needs?

I was very excited for this book. I love the idea of the gender switch in the roles of the “First Spouse” and thought that there is so much possibility in a story like this.

Let me start by saying the writing was good, the characters were well developed and the basic story arc was sound.

Things I loved: Gray was a total bottom and unashamed and it was never an issue at all! David stands up to one of his handlers and explains just why an MD can’t just “resign for 4 years” and expect to jump back into his career.

Things that didn’t work for me: The “evil” plot to keep Gray and David separated. If Gray is supposedly smart enough to be VP/President of the US – I have a hard time swallowing that he just let all his “staff” – who the conservative President put in place – run his life without once looking back and asking his HUSBAND OF 10 YEARS for his opinion.

It bugged me that the only interaction the two MCs had was to either have sex or fight. Two intelligent 30-40 year old men would talk and discuss the stress and address the emotional issues – at least once or twice in the year that this book covers – and I didn’t see them even attempting to manage the crisis til it had exploded.

I think Gray was too weak to be believable. The “evil” staffers were too villainous to be believable and the entire virus thing was over the top. I also think that David’s role would have been discussed before Gray signed up for VP because even the VP’s spouse has duties and once Gray was made President I don’t think David would have even been allowed to work or do all the stuff he did – simply as a security risk. So that part I never bought into.

I think there are some very interesting issues raised by this book, however. I do think that the idea that a spouse gives up everything once their partner is in office is interesting and when that role is a man, it becomes even more interesting as a “conundrum” because we’ve no experience with that. I’m not sure, however, that the role – not the gender- does seem to preclude any realistic work outside of the office.

In any case, it was an interesting, well-written book with some plot issues that I had a hard time reconciling – but if Politics is your thing I’d recommend this book.

Randy Fuller does the older voices well for this narration. I don’t love his version of David as it felt a bit too effeminate, but Gray’s voice was perfect. There were some sounds inconsistencies now and then, but they weren’t that distracting. I think that this is a good way to enjoy this story, but it didn’t help to override any of the previously noted plot holes.

Interesting premise, did not meet my expectations

The idea sounded good, but the follow thru did not meet my expectations. The story revolves around Grayson Alexander who had just been sworn in as Vice President, and became president after the President was assassinated on inauguration day during the parade from the Capital to the White House and his husband David Hammond a doctor who teaches at a medical school. The book is about only their relationship and everything is from David's point of view. You never find out about the assassination. David improbably continues teaching and does nothing in the way of "first husband or spouse". No politics enters into the story, not that I wanted it to, but in my mind, it is just not realistic for politics not to be a part of their relationship.Gray keeps the staff of the former president rather than creating his own administration. The blurb calls out the major crisis of the book and then they find out that the chief of staff has manipulated them both. I am not an expert in secret service nor white house protocol, but I do know that the press finds out everything and this story was like they were in a bubble that was untouched by anyone other than the chief of staff. With everything we learned about Obama's White House and now Trump's, it is incredulous that they could have this bubble where no one does interviews or smear attacks or that their personal life is not splashed all over the media. Narration: Michal Murphy has a "tough guy" sounding voice, good for aggressive characters, not so much for multiplicity of different personalities that this kind of book has. His aggressive sound is projected in almost every voice. During the book there is a State visit to England where a lower member of the Royal Family is charged with escorting David during their stay. I have not heard such a poor English accent in a professional produced audio book production ever. Michal did give some decent inflection with stress and strain that the MC's were experiencing. Overall, I thought this was a poor story and performance.

Overall it was decent. The storyline had potential but the it never reached it. The way the reader interpreted the main character was very feminine which to me didn't fit him. The character also complained about money was too much, literally I think it was every chapter. The last 2 chapters of the book just seemed forced and as if the author wasn't sure how to close. If the main character wasn't so whiny (it was too far for what was needed) I would have enjoyed it more. Once I got to the last 4 or 5 chapters I just wanted it over

I loved the story and the plot. love conquers all problems even with the deceit

Fuller really captures the emotion in this!

I remember thinking when I first read The President’s Husband that I would love to listen to it as an audiobook. When it finally came out on audio, narrated by Randy Fuller, I was excited to see how Fuller dealt with the character’s emotions and the tension in the story.

Because, ultimately, this a story solely focused on the relationship of the two men. How the smallest cracks become wide chasms when lies, meddling people, improper communication and too little time spent together all work against them.

I was really happy with the result! Fuller absolutely captures the building tension David feels, to the rage that bubbles over when he’s betrayed by the person who should always have his back, to the forgiveness and reconciliation of lovers who have spent a decade together.

Yes, there are points of the story that I felt could have been explored more, but Murphy writes these two flawed men wonderfully. He brings a depth to David and Gray that I really enjoyed and was absolutely engrossed in their story. Fuller manages to capture all the emotion, joy, passion, and pain and made this a very easy listen.

Bottom line: I really enjoyed the narration! If you’re looking for a story that focuses more on the relationship than anything else, I would absolutely recommend.

Thougjt originally great idea long disagreement. But realistically could someone forgive after being so neglected