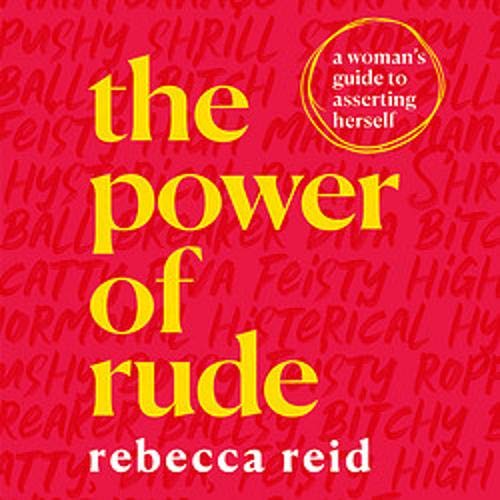 The Power of Rude

'Of all the things in the world to worry about, why would anyone put the right for women to be rude at the top of the list? It's a fair question. Happily, there is a very simple answer. Because I believe that an inability to be rude is one of the biggest issues which still inhibits the equality of women today.'

Reid takes the listener chapter by chapter through dating, family relationships, sex, the workplace, money, customer service and more and shows women how we can reclaim the word rude and use it to advantage. For decades, women have been called 'bossy', 'hysterical' and 'neurotic' in situations where men might simply be dubbed 'assertive'. We need to change the narrative around women and we need to use our voices to take control. Rebecca Reid isn't afraid to show us how.

What listeners say about The Power of Rude

Struggling to speak up, read this.

A must read fir those struggling to speak up for the selves. I appreciate its aimed at women, but men who struggle too or those that don't get why people don't speak up should read/listen to it too.

I enjoyed this book and will recommend it to male and female clients (I’m a therapist). It is direct and offers a great perspective. I believe that most men, me included, are not aware of what many women go through and have to tolerate from the actions and attitudes of men. This book gives examples of women’s experiences, highlights the different ways boys and girls are socially conditioned (which tends to disempower girls and women), offers practical suggestions for being more assertive (I would of found this book helpful as a non-assertive teenager), encourages women to take their power and hints at men’s need to educate themselves to understand the experience of women. Brilliant! Buy this book!

Engagingly written and beautifully read, this made me realize I need to be ruder.

Thank you Rebecca, a truly wonderful book that’s honest and really useful. It was funny and engaging the whole way through, just brilliant.