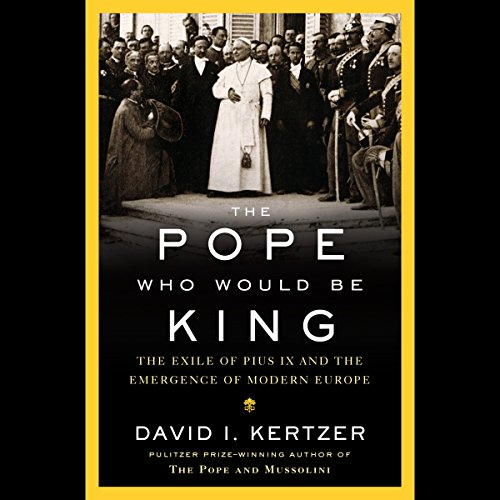 The Pope Who Would Be King

The Pulitzer Prize-winning author of The Pope and Mussolini tells the story of the bloody revolution that stripped the pope of political power and signaled the birth of modern Europe.

“[David I.] Kertzer’s brilliant treatment of the crisis in the papacy between 1846 and 1850 reads like a thriller. All the characters, from the poor of Rome to the king of Naples, stand out with a vividness that testifies to his mastery of prose.” (Jonathan Steinberg, The New York Review of Books)

Only two years after Pope Pius IX’s election in 1846 had triggered great popular enthusiasm across Italy, the pope found himself a virtual prisoner in his own palace. The revolutions that swept through Europe and shook Rome threatened to end the popes’ thousand-year reign over the Papal States, if not the papacy itself. The resulting drama - with a colorful cast of characters, from Louis Napoleon and his rabble-rousing cousin Charles Bonaparte to Garibaldi, Tocqueville, and Metternich - was rife with treachery, tragedy, and international power politics. David Kertzer, one of the world’s foremost experts on the history of Italy and the Vatican, brings this pivotal moment vividly to life.

Praise for The Pope Who Would Be King

“Engaging, intelligent, and revealing...essential reading for those seeking to understand the perennial human forces that shape both power and faith.” (Jon Meacham, Pulitzer Prize-winning author of The Soul of America)

“Richly rewarding...church history at its most fascinating.” (The Christian Science Monitor)

“Required, and riveting, reading that shares many of the qualities of Kertzer’s Pulitzer Prize-winning masterpiece: an exceptionally deep archival and scholarly foundation, and a rare capacity to tell the story of a critical chapter in European history with novelistic verve.” (Kevin Madigan, author of Medieval Christianity)

“A remarkable achievement - both a page-turner and a major contribution to scholarship accomplished with outstanding clarity and economy. Kertzer gives this story a notable degree of freshness and brings out vividly the determination, passions, blood, and gore of this dramatic moment in European history.” (John Davis, editor, Journal of Modern Italian Studies)

“In this riveting tour de force, David Kertzer shows how and why Pope Pius IX turned Roman Catholicism into the nemesis of modernity, with drastic consequences not only for the church but for the West - consequences felt to this day, when religion and politics form a lethal brew. Elegant writing, the pace of a novel, scrupulous scholarship - these hallmarks of Kertzer’s body of work are all in evidence here, wonderfully so.” (James Carroll, author of The Cloister)

“Kertzer provides an exceptionally deep archival and scholarly foundation and has a rare capacity to tell the story of a critical chapter in European history with novelistic verve. He brilliantly links the history of Italian characters to epochal changes in modern European history, including the changing fortunes of the papacy and its rule over the Papal States, of the time-honored tradition of divine right, and of the separation of church and state.” (Kevin Madigan, author of Medieval Christianity)

“The Pope Who Would Be King is a remarkable achievement - both a page-turner and a major contribution to scholarship accomplished with outstanding clarity and economy. Kertzer gives this story a notable degree of freshness, and brings out vividly the determination, passions, blood, and gore of this dramatic moment in European history.” (John Davis, editor, Journal of Modern Italian Studies)

What listeners say about The Pope Who Would Be King

I have really never had much interest in Catholicism or its history, but an NPR,review caught my attention prompting me to buy and read this fascinating book by a prized historian author. It is shocking to think as late as 1848 there was still papal rule. It really wasn't until after 1929 and Mussolini that the pope authority over the state changed and was reduced to Vatican only. And not until the 60s and Vatican 2 that many of the ancient beliefs about church authority and the notion of separation of church and state came to be. That's jjust crazy. We take for granted that separation and forget its importance. We still see glaring evidence of the issues it creates (think Arab nations), but forget it was not so long ago in our own western history when church was the state. I am ready for some more fascinating historical accounts from this author. As a note, this is a bit of a heavy read.

This book could be summarized as follows: the Zeitgeist of the Enlightenment conquers all her retrograde enemies. This is what one might expect from an author from the mid 19th century, not the 21st which requires more nuance and a fuller range of perspectives.

Second, the authors are theologically ignorant and brazen in their demonstration of this fact. The Divine Right of Kings was never considered an article of faith (if it had been, o e would find mention of it in the 16th century Catechism of the Council of Trent). It was certainly a very important theological opinion, but the Church is centuries older than the Papal States and everyone at the time knew that. The author fails to address the driving fear of political domination of the Church by outside powers, which was a key factor in the existence of the Papal States however imperfect they were.

I had no knowledge of the life of Pope Pius IX (“Pio Nono” to the Romans) or the troubles in Italy during his tenure. So as this history progressed, I found myself wholly absorbed in the car, waiting to see what happened next. There were multiple players in a game of international politics—the French, the Austrians, the other Italian kingdoms, as well as the conservative cardinals and the rebellious Roman liberals. The major issues, primarily the church’s control of state government and the unification of Italy, were fascinating. And after the Pope’s exile from Rome (not a spoiler—it’s disclosed in the first pages), the suspense turned on whether and when he might return to Rome.

David Kertzer has a novelist’s ability to draw characters and create suspense. Characters like Cardinal Antonelli, Alexis de Tocqueville and Garibaldi are well-drawn. The pope himself comes across as somewhat tragic, longing for his people’s affection but suffering because of his own weaknesses and his tendency to be manipulated by others.

The history was well-read. I was surprised by how much I enjoyed it.

I enjoyed the historic recounting of this interesting and unsettled time in Catholic history. Naturally there are lots of players in the story and at times was confused on what was going on. the narrator spoke clearly and well, but at times seemed a little robotic. overall I'm glad I finished the book and am now more knowledgeable about this particular point in time.

This book fills many gaps in the history of the Papacy. I was not aware of the ferocious rebellion of the Papal States-which was justified. The Roman Church as governed by Pope Pius IX was a Medieval institution whose cruel methods of governing clearl in need of reform. The author has done an outstanding job describing the Roman/Italy Culture and the very difficult transition to modern era. I can better understand the nature of foreign military intervention as used by the Papacy against "his subjects" and especially the Jewish population of Rome. "Viva the Republic" What a great read!

I loved Kertzer’s The Pope and Mussolini, hoped to enjoy this as much. I liked the reader and , broadly speaking , the story. The problem I had was trying my follow the literally dozens of the people who populate the book. For me, I would have been better off having an book on Kindle or the physical book, to keeping track.

Biased History From Beginning to End

The only thing you can give the author is he never once strayed from his biased, completely one-sided account. He kept true to only telling one side of the story the entire time without wavering.

a very good review of this time in history

is a very good book had a lot of interesting points unfortunately it ended rather quickly. Also had a few factual errors. most notably his comments on the infallibility of the Pope in secular matters

historical and riveting in it's accuracy.

A depiction of pre Italian nationhood..torn apart by a vaccillating Pope who could not commit to reform and Revolution and was buried in the avalanche .