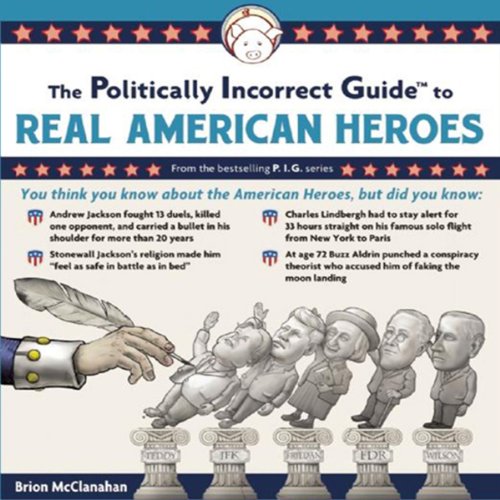 By: Brion McClanahan
Narrated by: Tom Weiner
Try for $0.00

As presidential candidates sling dirt at each other, America desperately needs a few real heroes. Tragically, liberal historians and educators have virtually erased traditional American heroes from history. According to the Left, the Founding Fathers were not noble architects of America but selfish demagogues, and self-made entrepreneurs like Rockefeller were robber barons and corporate polluters. Instead of honoring great men from America’s past, kids today now idolize rock stars, pro athletes, and Hollywood celebrities.

In his new book, author Brion McClanahan rescues the legendary deeds of the greatest Americans and shows why we ought to venerate heroes like Captain John Smith, adventurer Daniel Boone, General Robert E. Lee, and many more. The Politically Incorrect Guide to Real American Heroes not only resuscitates America’s forgotten heroes but sheds light on the Left’s most cherished figures, including Franklin Delano Roosevelt and the Kennedys.

With biting wit and devastating detail, McClanahan strikes back against the multicultural narrative peddled by liberal historians who make heroes out of pop-culture icons and corrupt politicians. In America’s hour of peril, McClanahan’s book is a timely and entertaining call to remember the heritage of this great nation and the heroes who built it.

“Brion McClanahan identifies some of the long forgotten American heroes who helped shape the greatest quality of life the world has ever known.” (Ted Nugent, rock ’n’ roll legend and New York Times best-selling author)
“You have to read a book that explains why well known men like Robert E. Lee and little known women like Augusta Jane Evans are American heroes, and why PC favorites like the Kennedys and Margaret Sanger should never have been given the title in the first place." (Clint Johnson, author of The Politically Incorrect Guide to the South)

Not a history book

Biased and spin. I would be interested in learning more about the history of these figures, but I don’t see why they must be called heroes. They had adventures were racists did some work to forward the cause of US expansionism and if that’s your cup of tea then that’s fine, but in its very introduction the author lays out the reasons why calling these people American heroes is inaccurate. They were fighting not for the rights of all. They had slaves and fought the cause of slavery. They fought for the landed gentry not for the common American who could not vote without land. They were heroes perhaps to the people the fought with in small and big ways, but I as an American don’t see these people as heroes.

The people who he says are the heroes of the left are surely problematic figures as well and he makes some interesting points, but the bias is so evident and the spin doctoring so Willy Nilly that I can’t take it seriously. There is no precision in any of these arguments (if you could even call them that). No wonder it’s free. I can’t imagine this book would sell many copies.

could not get past the first chapter...

hated it the narrator was condescending and only told the part of history that made his case. from his point of view he's politically incorrect. from my perspective he's the same old tired narrative that says the white man is better than anyone else

Overall, this book is great but I have one main caveat: I have read some of McClanahan’s other works and listened to his podcast, and I was not expecting such a strong dose of evangelical bias. It’s fine once you realize it’s there and the work compares favorably to other material with this kind of bias but boy was I surprised. Evangelicalism aside, the message of this book if revenant and important for younger generations and I highly recommend it.

I enjoyed this book, can’t wait to do another Audible similar to this. Very entertaining.

Very entertaining and informative. I really enjoyed the perspective of many different hero's of our country, unfiltered by the popular whims of current times. The performance by the author was also well done. I highly recommend this book.

Light weight and conclusion based.

Interesting concept, and many of the people profiles were high achieving Americans. Liked that this was not just set list of “politically correct” figures.

Unlike most histories I read (a lot, including at least one comprehensive bio on every POTUS), however, this book offers little criticism of the majority of those profiled. The book (and series), as such, suffers from a lack of objectivity, which is unhelpful in a biography.

Makes me proud to be an American again. Personally, I'm tired of all our heroes being deconstructed and turn apart at every turn in today's America. This refreshing look at traditional American heroes was a well needed and enjoyable read.

opens eyes to the modern spin on false heros. now i must dig deeper into the true stories of real heros listed in this book

Well Worth Your Time!

Well done! This book lets the qualities and character of some truly great Americans shine forth. The book displays it's careful research, and thoughtfulness throughout.

This book will show the listener real heros, and real frauds. The heros in this book are the kinds of people I aspire to be like.

Loved it, it gave me a better perspective on history. I'm forever grateful for them.