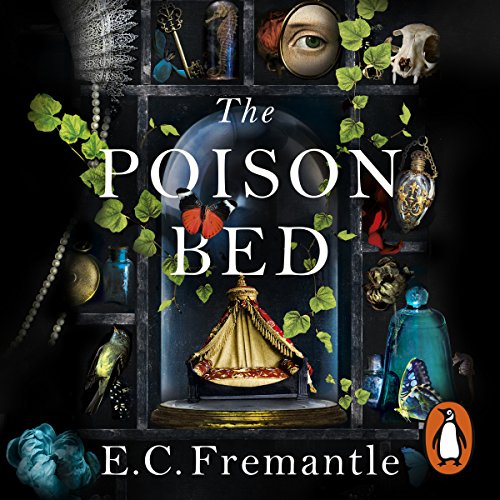 Penguin presents the audiobook edition of The Poison Bed by E C Fremantle, read by Ross Anderson and Perdita Weeks.

A Marriage. A Murder. One of them did it. Which of them will die for it?

In the autumn of 1615, a scandal rocks the Jacobean court when a celebrated couple are imprisoned on suspicion of murder. She is young, captivating and from a notorious family. He is one of the richest and most powerful men in the kingdom.

Some believe she is innocent; others think her wicked or insane. He claims no knowledge of the murder. The king suspects them both, though it is his secret at stake.

Who is telling the truth? Who has the most to lose? And who is willing to commit murder?

"A Jacobean Gone Girl. Dark and deeply satisfying, The Poison Bed is a tale of monstrous intrigue and murder." (M J Carter)

"A thoroughly compelling tale of sexually-charged intrigue and murder. Once started, impossible to put down." (Minette Walters)

What listeners say about The Poison Bed

Good story! Perdita Weeks is an AMAZING narrator. Read Circe as well is my advice. The editing could have been better on the recording, but otherwise this is great. Elizabeth Freemantle never disappoints.

As good as the rest of Elizabeth Fremantle’s work

I love all of this intelligent author’s work and while this one is less court drama and more thriller, it’s as immersive and filled with historical detail as the others. If you’re looking for Elizabethan/Stuart era literary fiction, look no further. Thrilling, complex, readable. 5 stars without a doubt.

Don’t bother. Not even the twist at the end makes this worth the read. It’s not even a real twist.

Absorbing! Elizabeth Fremantle delivers a Jacobean Murder Mystery Masterpiece! Based on true events and a real cast of characters, Fremantle has created an engrossing story that readers will not be able to put down. Was the beautiful Frances Howard guilty of murder? Conspiracy to commit murder? Or just an innocent pawn in her uncle's game for power? Just when you think you've got it all figured out there is a plot twist so shocking you'll have to re-read it to believe it!

This novel had me sitting on on the edge of my seat. I do not know a lot about this period of history but it is only the background to a strong tale with plenty of twists and turns. The two narrators are wonderful giving a flavour to the contrast of an insider and an outsider.

Had to stop listening because the female narrarator is so quiet. I've never had that problem with any other audiobook.

House of cards level of duplicity

I thought the narrators were excellent, however the female narrator’s voice could be so quiet that I would have to turn the volume all the way up on my speakers which would be intermittently inaudible or shrill ear piercingly loud.
The first half of the book was quite slow and I lost interest for a while but decided to power through and finish up and that’s when I got really juicy and salacious.

I am amazed at the imagination of the writer. Such a great storyline. The performance of the readers is what completely sucked me in. Made a very long, boring drive to southern California enjoyable.

Be forewarned that the female reader almost whispers through much of her dialog, making volume too high when male speaks. Another tale of a historical beauty who earned her rank through manipulation, seduction, and poison. Presented in a 'young man in unrequited love' scenario, he only realizes he got more than he bargained for - when it was too late. Like all monsters of that period in history - even those beautiful, titled and female - survived to continue her 'evil ways'. Based on history, this is a fascinating look at what it took to attain power - and remain alive - during that time. Highly recommended.

Absolutely brilliant book. Not at all what I would usually listen to but it had very good reviews so I thought I would give it a try. Lots of twists and turns, not at all predictable. Narration was superb.

I have no idea why I persevered with this! Almost gave up half way and did indeed ,being mildly interested in their fates, look up the fates of the historical characters on wikipedia. Only kept on listening in the hope that Robert Carr would eventually stop being so whiny and monumentally stupid and start to act in such a way as to provide some dramatic tension. Got to the point where I would have hanged him myself and I say that as someone who doesn't believe in capital punishment! Ending very abrupt and unsatisfying as if author had had enough too...

Amazing story based in fact

Brilliantly told story with a neat twist. Performances convincing and made me want to keep listening.

Poison, poison everywhere and not a drop for me.

I’m at a loss to understand how this novel has received such praise for its author. Claims of the research and how well 17th century court life is described at James VI court are risible, there is little to no detail, all of the characters are at best two dimensional. The book reads like an ‘introduction to writing fiction’. There is simply no depth to the characters. A real opportunity to reveal a fascinating period in Scottish and English history has been missed. The narration and ‘woe is me’ timbre from the main characters throughout, adds nothing to the flimsy writing. To be honest I only finished the book in the hope it would improve. It didn’t.

Not the usual thing I would listen to, but I enjoyed Perdita Weeks narration of Circe so much I thought I'd give another of her performances a go, and I wasn't dissapointed. An enjoyable listen.

Narrating is vastly different from reading out loud. One is easy, the other is supremely difficult. Ross Anderson can read out loud. His delivery is monotonous, colourless and ultimately very boring to listen to. Perdita Weeks has a very good voice, full of colour and subtle nuance. Her internal volume control needs some readjustment, though. She veers wildly, from a whisper, to a sudden bellow. This happens continually, from sentence to sentence and within sentences. It has quite a significant effect on the listeners ability to actually hear what she is saying. This is important, but easily fixed by simple microphone technique.

Well worth a credit.

Not gripped by this book

Listenned all the way through, but it was a struggle, just to see where it was going. Rather too slow for me.

Story was fine but the female narrator is annoying

The story is good and the male narrator has a strong consistent voice.

The female on the other hand... where to start! Why does she keep whispering?! It’s nearly impossible to hear this in my car and I thought the whole point of audible was anywhere at anytime. Her tempo is up and down and so was my volume controller. I couldn’t even finish the book because you can’t hear her when she’s whispering.

I’ve listened to a lot of audiobooks and this is the worse one for sound yet. Please listen to these recordings before they are released.

a beautiful story of love and deception. I enjoyed every part of the store. well written and had me hooked all throughout.

Excellent tale of historical intrigue, romance, politics and murder. Manipulation is to the fore in making this an excellent read / listen. Highly recommended.