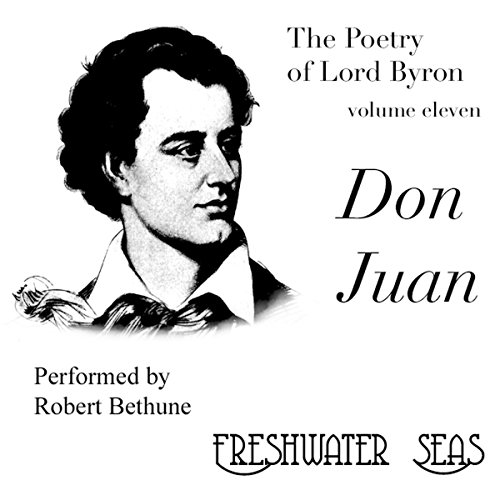 By: Lord Byron
Narrated by: Robert Bethune
Try for $0.00

The best way to appreciate this long and fascinating poem, really a novel in verse, is to just let it wash over you. Don't try to get caught up in the story, for Byron won't let you do that; don't try to figure it out, for Byron doesn't want you to do that either. Just listen to the man converse with you and enjoy his playful talk - that's why he wrote it, and that's what it's for.

For those who are otherwise unfamiliar with the work: Don Juan is a young Spanish nobleman who falls into a love affair at 16 with a married woman. To avoid being killed by her husband, he flees the country. Traveling by ship, he is shipwrecked and rescued by the beautiful daughter of a pirate. Her father finds out about their affair and sells Juan into slavery at Constantinople. Purchased by the Sultan's wife, he is expected to serve as her boy-toy, but again escapes. He is then caught up in war, and then makes his way to England, where he finds himself amid high society with three different women interested in him. At the point where Byron's incomplete text ends, he has yet again fallen into another love affair.

Where would Byron have taken him after that? Who knows? All we can be sure of is that there would have been many affairs with many lovely women yet to come.

What listeners say about The Poetry of Lord Byron, Volume XI: Don Juan

Excellent reading of a difficult to read book

Robert Bethune really does an excellent reading of Lord Byron's poetic narrative ‘Don Juan’. Byron's poem, employing the complex 8-line rhyme scheme of ottavo rima, is not an easy feat to read well. What is amazing is how well Bethune reads Byron's poetry. He not only reads it fluently, and with keen interest and passion, keeping the reader's attention on the story, but he captures the satirical and comedic elements of Byron's mock-heroic romance so very well. Bethune does all this while appearing to have a good time telling Byron’s story, even seeming to laugh at the events as they unfold. It's this witty satirical bite running throughout the reading, delivered in cascading, jaunty rhythms (as if Bethune were delighting to tell you the story in person) that makes this reading of Don Juan so enjoyable. As another reviewer has already commented, this type of flexible reader, who can capture the serious as well as the more light-hearted satirical and comedic elements of Byron's masterpiece, is rare and a delight to find on Audible.

This is thirteen and a half hours of charismatic genius, brilliantly red by Robert Bethune. Turn off the radio, put this on your iPod dock and enjoy!