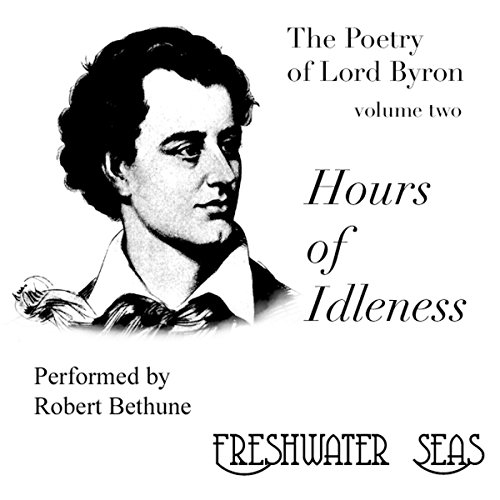 By: George Gordon Byron
Narrated by: Robert Bethune
Try for $0.00

For those who love Byron’s poetry, the value of this work is not so much the poetry itself as the promise of what is to come, it is fascinating to see how his power as a poet is constantly growing and to see how his enormously romantic heart and soul goes about fashioning itself.

Though a young man, he often writes as if he were old, musing on days gone by, especially his schoolboy life at Harrow. He tries his hand at several genres: classical translation, narrative poetry, love poetry, philosophical musings. George Gordon, Lord Byron, published his first book of poetry in 1806 when he was only 18 years old. However, Byron suppressed it by having all the copies destroyed - or so he thought. There were four copies that were not destroyed. However, Byron later republished almost all of those poems, and added more, in January 1807, under the title Poems on Various Occasions. Then, in the early summer of 1807, he republished most of those poems and added still more, under the title of Hours of Idleness. And finally, in 1808, he went through the process again, selecting some of the poems he had already published and adding a few more; this time, the title was Poems Original and Translated.

As if that isn’t complicated enough, he also changed the texts of most of the poems each time around, sometimes only slightly, other times quite significantly. It would be unfair to ask the listener to buy multiple copies of the same poem. Furthermore, within the confines of an audiobook, it is just not possible to trace all the changes Byron made in the poems. Therefore, this recording is a collection of the poems included in the 1807 and 1808 publications, and does not include the poems published in 1806, and it uses the last version of each poem as Byron finally left it after any and all revisions.

What listeners say about The Poetry of Lord Byron, Volume II: Hours of Idleness