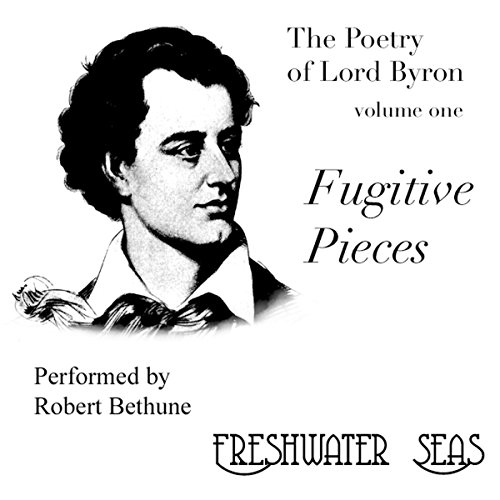 The Poetry of Lord Byron, Volume I: Fugitive Pieces

The Poetry of Lord Byron, Volume I: Fugitive Pieces

George Gordon, later Lord Byron, published Fugitive Pieces in 1806 when he was only 18 years old. It was printed, but Byron's friends, particularly Reverend Thomas Beecher, advised him that it contained poems that were scandalously amorous, particularly the poem "To Mary". Byron suppressed it by having all the copies destroyed - or so he thought. As it happened, Thomas Beecher himself kept his copy, and there were three other copies that were not destroyed.

Reverend Beecher's opinion was certainly correct, though his advice was inexcusable. The amorous poetry in this volume, particularly "To Mary", is some of the most erotic serious poetry in English up to that time. Byron was an intensely emotional, intensely sexual young man, and his poetry shows it very clearly. It also shows the work of a young man with the makings of not only a serious poet, but a skillful satirist and humorist as well. While many of the poems are deeply romantic, indeed rather melodramatic effusions of the sort one would expect from the young man who would become a founder of the Romantic movement, others read more like Ogden Nash—witty, lively and skillfully done in happy, bouncing rhymes and meters, not at all what one might expect.

This recording of the volume Fugitive Pieces is based on the original volume as later published in limited-edition form. For that reason, the reader who knows Byron’s poetry well will notice that some of the texts used here differ, sometimes markedly, from the versions more commonly found. Byron revised and republished these early poems several times under several titles, most notably Pieces on Various Occasions and Hours of Idleness. Later titles in this series, which aims to present the whole of Byron’s poetry, will use the later versions of these same poems. In some cases the two versions are nearly identical.