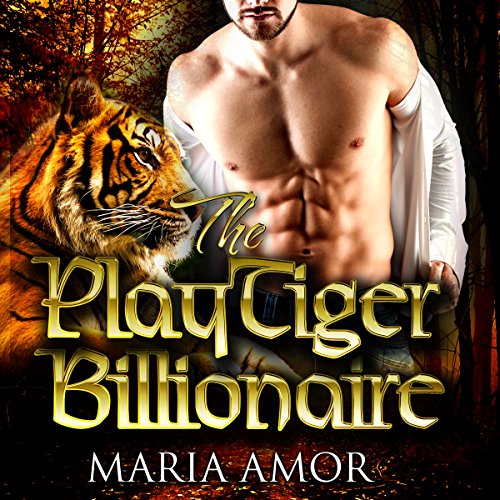 Playboy weretiger billionaire Nick came to realize that he needed an heir. He knew that the tiger life was one that was full of danger, and having someone to pass on his fortune to was of mass importance.

However, having not had a serious girlfriend in years meant the playboy had no one to turn to in order to help him out.

So he decided he had no choice but to hire a woman to be a surrogate to his future tiger baby.

That woman was the cute and curvy student Cynthia. Living life paycheck to paycheck was no fun for her and the payoff from Nick's proposal was well worth her while.

So she agreed, but she really had no idea just how dangerous the tiger life could really be and she was about to find out in more ways than one.

This book was OK. The story, although it moved very quickly given the length, was pretty good. What a surprise Cynthia received when Nick suddenly had to shift to ward off danger since he never told her he could. The narrator was not so good. At times it sounded like she had a southern accent. The ending felt rushed and I was curious to know how Nick reacted to her news. At times, the sound would go really low and then get loud again. I thought it was my iPod so I tried on a Samsung and the sound quality was the same. This is not a book I would listen to again nor would I recommend the audio version.

It was a good quick paranormal romance. I would have liked more romance or a meet cute but it was still interesting and had some great steamy scenes. I really liked the supernatural aspect and what a strong woman the heroine was. Liked it! I received this audiobook by my request in exchange for a review from Audiobook Boom.

This novella length book is too short to have a lot of character development, but I still ended up liking both the main characters. Nick is a wealthy playboy who hides his true nature as a tiger shifter from the world. Because his life is full of work and trying to solve his father's murder, he doesn't have time to date. Thus, he is completely unprepared when he decides that he needs an heir. He approaches a young woman working at a newly acquired company named Cynthia, and both her dire financial straits and her instant attraction to Nick make her agree to his proposed surrogate arrangement. Of course, Cynthia has no idea that shifters exist, and they begin this contractual affair with mostly lust and little to no affection. Although they struggle against it, they both begin to develop feelings for each other, but there is still that pesky problem of Nick being a tiger and the danger that brings to Cynthia and to his world. I know a reader must suspend reality to enjoy paranormal stories, but I felt that everything was too rushed and too unrealistic in the book, and I never became invested in Nick and Cynthia's HEA.

My review on Sloane Richard's narration is mixed. She has a fairly flat delivery with no character differentiation. However, her voice is pleasant, and, other than some repeated words and phrases throughout that are probably an editing issue, her performance is pretty smooth.

This is a quick listen with steam, action, suspense and a slow building relationship. The story is written well but could have been a bit better. The characters are not all that deep but well written as well. The narration of the voices and emotions was very well done but it sounded like she was in a large room and at times a bit tinny. With that said, I was still able to listen to the story with ease, so it doesn't take anything away but could have been better. I think with a bit more practice Sloane Richards has the potential to become a great narrator.

It was just ok for me! The narration was good but sounded a little rushed. The audio wasn't crisp, clear and clean. The author does a good job with the characters. Although the story is very short, it didn't lack in entertainment. This was my first book by this author and I would be willing to read more of her books. I was given this free review copy audiobook at my request and have voluntarily left this review.

I was supplied with this audio book free of charge & in return I offer my unbiased review about this book . I didn't like the story or the way it flowed but I thought the narrator tried to lift this book . " His sandpapery tongue lingering along her inner labia " , I was finding the story unusual up to that point , unusual , but not totally bizarre . That was just the start of the "sex part" in this story . Her inner walls gripped him , her walls held him , he felt her walls tighten , her walls were flooded , her walls , walls ,walls , sounded like he was fucking a building not a woman . Lucky everything moved on from there quite quickly . But suddenly Cynthia was surprised & I have to agree with her , so was I . Cynthia wondered , "What the hell is a loin doing in the centre of the city "? Good question but before we got an answer a tiger soon appeared & the fight was on , lion V tiger . As the lion & the tiger fought , (remember this is in the centre of the city) their growls & screech's got louder & Cynthia look around to see if " animal control or the police " were coming . The story might have improved 100% but I never listened to the rest of this book , I quit here , it was chapter four & I was confused & exhausted . As I said I was gifted this book for a honest review. I guess I'll never know if animal control showed up or not .

I received this audiobook for free in exchange for an honest review. This short story was pretty good. A couple of parts I felt were rushed in the writing but all in all I thought it was a great short read. To me, the narrator seemed to be new. Although her voice was nice to listen to, at times she was far away or too close to the microphone. I had to keep adjusting the volume. Chapter 2 audio sounded like it was done on a phone. Also, the narrator was extremely fast with her words like she was nervous. I had to slow down the pace on my app. Don't get me wrong, I did enjoy her voice I just think with some practice she could be great. 😊

Nick has become the heir and responsible for his family company. Not having a serious girlfriend/mate and questions of his father’s death, he is encouraged by his mother to have a child..surrogate is ok until he does find his mate.
Cynthia is a struggling college grad working her way up in her job..when Nick buys the company and he realizes he wants her to have his child.
A short story it moves fast and any real clear insta love is missing..but it isn’t badly done..the story is fast, but has action, some steam, and suspense.
The narrator was good but the quality of the audio was bad at first, but did improve. About 12 minutes in there is a horrible tinny sound, but it does go away. There are also a couple spots of repeat of lines.

BOOK REVIEW.......
This was so boring. It was only about 3 hours long but it seemed like it went on forever. And at no time did I connect with the characters. There was nothing about them that was interesting. They didn't have any heat or chemistry. The dialogue was bland. It was just so flat and boring.

NARRATOR REVIEW......
This narrator did not help the story at all. There was no life put into the characters, Her tone sounds bored and flat. She rather reminds me of how in school students were often forced to read passages from history books and such out loud in front of the class. That's the kind of feel she brought to the narration.

I really liked this book. It was a short shifter romance that had a little office romance. The romance didn’t have the insta love but instead had an instalike and a small time jump (like a month) where a relationship could build. Sexy times were on point.
Sloane Richards did a great job performing. She seems like she’s got talent and I hadn’t heard her before. The audio had a tinny thing going but it wasn’t horrid (I’ve heard worse).
I’d listen to it again :)
GFYDU DBAD MTYB