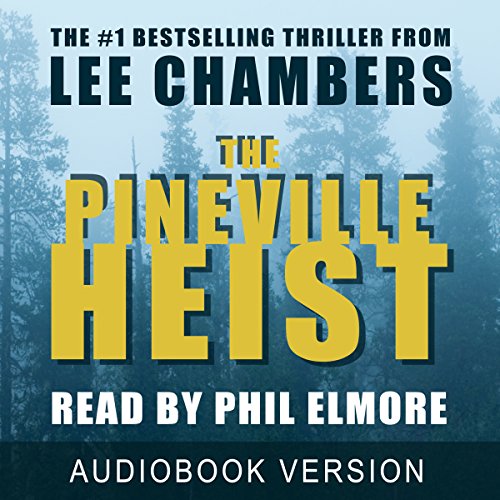 Award-winning writer/director Lee Chambers takes on a YA crime thriller for his debut novel.

THE STORY: Seventeen year old Aaron stumbles into the aftermath of a five million dollar bank heist gone wrong. Hiding under a canoe, Aaron partially catches the murder of one of the robbers. In the chaos he sneaks away with the money and heads straight for the closest place of safety, his high school. Terrified, Aaron tells his shocking tale to Amanda Becker, his drama teacher, but it doesn't take long for one of the psychotic robbers to show up. In the locked down school the pair are relentlessly pursued in a quest to get the money back and wipe out the evidence.

The Pineville Heist, based on the award-winning screenplay by Lee Chambers and Todd Gordon.

I couldn't put the book or audio book down! I wanted to finish it in one sitting.

Aaron Stevens, son of Derek, finds himself in the robber’s hideaway location. Understanding the importance this situation might have on his father’s business and the town’s economics he decides to get involve. But as any thriller goes, he gets too involved and now the robber’s are after him. Will leave it at that so I don’t get too much into spoiler territory.

Really enjoyed the narration, it helped me more in really envisioning each “scene” and or character. The book and narration is read as movie or story board, and that helps the reader to feel like he/she is part of the story. Narration is not monotone there is a slight difference when each character is speaking during the narration. The audio is as intense as the book and that is something I love about audio books. I found myself so enthralled by the story, that I could just focus on the reader’s audio and nothing else.

I have read the book to my son but he also heard the audio book and he loved it. And this coming from a boy that doesn’t like reading it’s saying a lot! So I am very pleased with this.

Narration Wise:
Pacing of the narration at some points was too fast at least for me, but in my case English is my second language. I have read the book before, so knowing the story helped. Nevertheless since the story is very fast paced and action filled the reader’s pacing fits the book appropriately. Reader’s tone is good and understandable. Since it is just a one-voice reader, slight differences between each character “speaking” are present. I haven’t had many experiences with Elmore’s narration style, but it serves this book purpose and carries the story well. I personally like the words intonation of any reader, and Elmore’s rendering is adequate according to the characters in hand. Personally, when chapters are made a reference to I prefer they be read as “Chapter 2”, instead of just ‘2’; that just takes me some time to get used to.

Technically speaking, it was kind of distracting at first that sound-wise it sounded like a far-away echoic recording. At one point an apparent voice-over was made and the narration’s volume went up.

Nevertheless, I recommend this audio book as well as the book; it is an easy read and very good story for anyone.