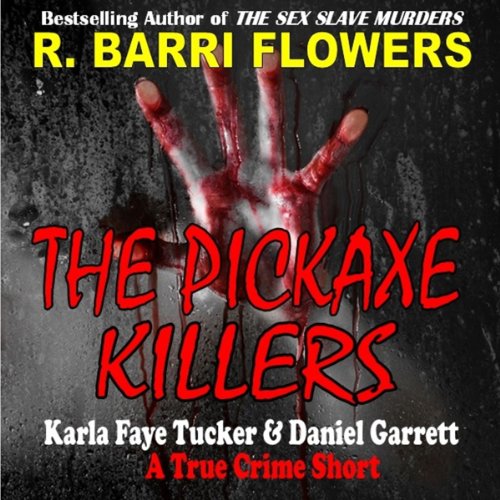 Having written about hundreds of notable murders in his best-selling true crime book, Murders In The United States: Crimes, Killer and Victims of the Twentieth Century, one case that stood out to Flowers for its sheer brutality as well as shocking aftermath was that of Karla Faye Tucker and Daniel Garrett, who used a pickaxe to hack to death two people.

It began in the wee hours of June 13, 1983, in Houston, Texas, as lovers Tucker and Garrett broke into the apartment of Jerry Lynn Dean. By the time the couple left, Dean and his companion, Deborah Thornton, were dead following a vicious attack with a pickaxe and hammer.

In this tale of revenge, murder, substance abuse, betrayal, and redemption, the author gets to the root of the violent crime that ended four lives and gripped the entire country as the sordid details and shocking twists and turns played out over fifteen years.

As a bonus, included is a complete true crime story on sexually motivated Canadian serial killer intimates Karla Homolka and Paul Bernardo from R. Barri Flowers' bestselling true crime book, Serial Killer Couples: Bonded by Sexual Depravity, Kidnapping, and Murder. An added bonus is an excerpt from The Sex Slave Murders, in which the author probes into the lives of married serial killers Gerald and Charlene Gallego and the sex slave fantasies that fueled their abduction and murder of young women.

What listeners say about The Pickaxe Killers

This contains about as much information as you'd get out of old news articles and nothing more. Very short and just the basics. I didn't even find the narrator's voice appealing,
Most of the book is advertising his other works, and maybe a 15th of the book is on the title story

this "book" is just a long ad

for three books by this author. I am assuming that I can return/exchange it. I am a bit surprised by Audible.