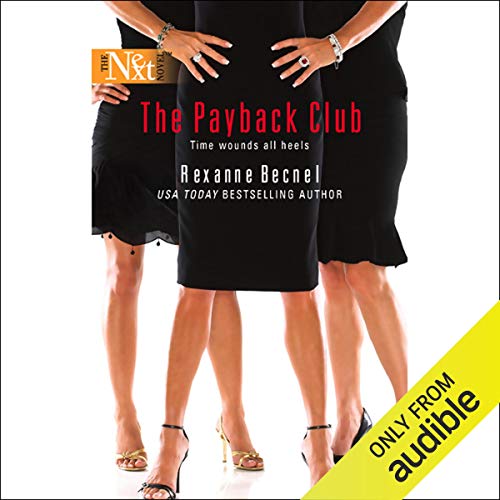 By: Rexanne Becnel
Narrated by: Lindsay Ellison
Try for $0.00

"Living well is the best revenge..."

Well, maybe. But when it came to a woman scorned, not to mention two women scorned, maybe revenge was the best revenge. Thus when Joan Hoffman and Liz Savoie, both systematically dumped by the men they thought they loved, worked out side-by-side at the gym one fine day, they formulated a plan. A club, if you will. Why not go after each other's husbands? See them. Seduce them. And drop them.

The plan was simple. The reality, however, was complicated by pregnant mistresses, embittered new wives, surly grown children...and then one of the exes went missing. And the members of the Payback Club were in for it now: Would they get even? Would they get everything?

Or would they get 20 years to life?

What listeners say about The Payback Club

At Last! A Sap-Free Chick Story

As a business owner and mother of three young boys, I rarely find time to actually sit down and read a book written for adults. Lately, I've turned to audiobooks to inject something other than Elmo and Nickelodeon into my brain.

The Payback Club was great from start to finish. Unlike others, the narrator did an excellent job of voicing the various characters without being annoying or insulting. The storyline held my attention and managed to qualify as a 'chick' oriented tale without delving into typical romance novel type fare (did I mention I'm an action movie watching, '24' series junkie type?)

The author does an excellent job of making you care about the various characters and includes different ethnic backgrounds without being stereotypical. She also manages to convey the true sleaziness of the ex-husbands while contrasting that with other male characters of morality and substance (The Payback Club is, fortunately, not a club of man-haters.)

I listened to this while working and while working out and was only disappointed when it was over. Looking forward to the next release from Rexanne Becnel. Kudos!

this is SUCH a good book. i ended up listening to it in two days i was so hooked!

This is not high-brow literature, but it is real fun. The story could easily have gone down the road of a "men hater's" club, but instead the twists and turns takes this tale to a road of true friendship and a realization that no one is perfect.

The narrator's female voices are wonderfully expressive, but her male voices sound very similar -- husky grating and not realistic. But truly, it idoes not matter. The story is too delightful.

A woman's story that is well worth listening to.

Love this and the lady who read it - only thing was I thought the ending was a little weak for the paybacks that had gone before......should have had a little more of a sizzling ending.

If you could sum up The Payback Club in three words, what would they be?

Joan. I identified with her situation of being cheated on.

It made me laught often.

Just a fun, relaxing "read" while I knitted/crocheted. I will look for more by this author.

I like a fluffy chick-lit book now and then. But this one is just good to pass the time and not much more. The characters aren't that compelling, sorry to say. Back to the Shopaholic genre for me.

Cute story with a tidy, happy ending. Easy to listen too, kept me interested. Definately a book for women, doubt many men would enjoy it.

The narrator was great! The story had enough twists and turns to keep me engaged and guessing.

I was surprised at when I had two hours left! Time flew fast!

I was immediately intrigued with the story line, HOWEVER, the narrator threw me off in the beginning. I did NOT like her! PLEASE, PLEASE, PLEASE stick with it! She slowed down and it improved. I fell in love with the characters! Overall it was a GREAT BOOK!

I loved it, wan't sure at first, but couldn't wait to find out the 'payback'. I took it with me on vacation to listen to by the pool and it was perfect. I laughed, I cried, I got mad, I emphasized; the resiliency of women is a remarkable and awesome thing to see.