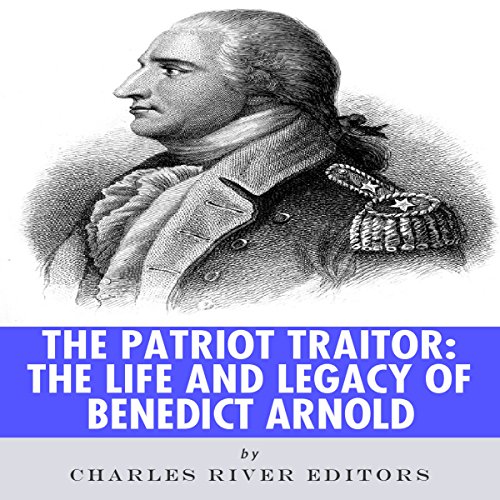 The Patriot Traitor: The Life and Legacy of Benedict Arnold

By: Charles River Editors
Narrated by: Sabrina Z
Try for $0.00

On October 7, 1777, Benedict Arnold rode out against orders and led an American assault against British forces led by General John Burgoyne in one of the climactic battles of the Revolution at Saratoga, the ultimate turning point of the war. Near the end of the most important American victory of the Revolution, Arnold's leg was shattered by a volley that also hit his horse, which fell on the leg as well.

Arnold would later remark that he wish the shot had hit him in the chest. If it had, Benedict Arnold would be remembered as one of America's greatest war heroes, and probably second only to George Washington among the generals of the Revolution. In fact, when Arnold was injured at the height of his success in October 1777, he had been the most successful leader of American forces during the war. Arnold had been instrumental in the seizure of Fort Ticonderoga in 1775, he constructed the first makeshift American navy to defend Lake Champlain and delay British campaigning in 1776, and he was the principal leader at Saratoga in 1777. Even his unsuccessful campaign to Quebec in the winter of 1775 is remembered primarily for the amazing logistical feats undertaken by Arnold and his men to even reach the target.

History has accorded Arnold his fair share of credit for the fighting he participated in from 1775-1777. The problem is his contemporaries did not. Arnold was better on the field than any other American general in those years, but his mercurial personality rubbed some the wrong way, and other self-promoting generals, from Ethan Allen to Horatio Gates, credited themselves with success at Arnold's expense. Meanwhile, the Second Continental Congress frequently if inadvertently slighted Arnold, failing to duly promote him in a timely fashion and failing to pay him four years of back pay even as he spent his own private fortune training, equipping, and feeding his army and navy. Historian William Sterne Randall estimates Congress shorted Arnold out of the equivalent of $275,000.

Today, of course, all of that has been overshadowed by Arnold's treacherous plot to turn over West Point to the British in 1780. The infamous plot came about while Arnold convalesced as the military governor in Philadelphia, where he met and married the Tory-affiliated Peggy Shippen. Arnold grew more concerned about the patriot cause, and combined with the perceived insults, exposure to Loyalist leanings, and another Congressional rebuke for living extravagantly in Philadelphia, Arnold decided to secretly offer his services to the British.

The Patriot Traitor: The Life and Legacy of Benedict Arnold chronicles Arnold's life and military career, but it also humanizes the man and offers an objective look at Arnold's treachery and plot in an effort to separate fact from legend.

What listeners say about The Patriot Traitor: The Life and Legacy of Benedict Arnold

Patriot Traitor -- Could have Been Better

The narrator was awful. It was as if she had never done professional narration before.

A different narrator, someone who could read with expression.

What else would you have wanted to know about Charles River Editors’s life?