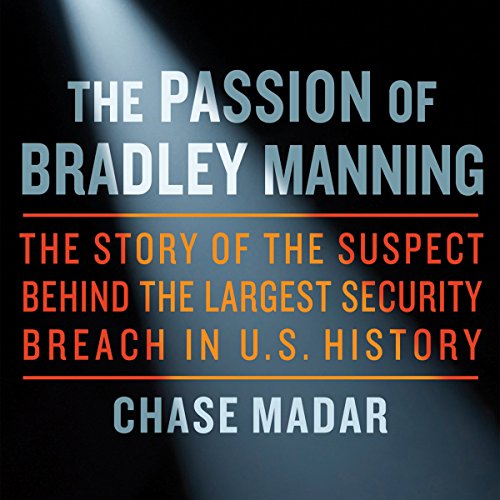 The Passion of Bradley Manning

The Story of the Suspect Behind the Largest Security Breach in US History
By: Chase Madar
Narrated by: Peter Johnson
Length: 4 hrs and 48 mins
Categories: Bios & Memoirs, Criminals
3 out of 5 stars 3.2 (5 ratings)

The Passion of Bradley Manning

In May 2010, an intelligence analyst in the US Army's 10th Mountain Division was arrested on suspicion of leaking nearly half a million classified government documents, including the infamous "Collateral Murder" gunsight video and 260,000 State Department cables. After nine months in solitary confinement, the suspect now awaits court-martial in Fort Leavenworth. He is 24, comes from Crescent, Oklahoma, and his name is Bradley Manning.

Who is Private First Class Bradley Manning? Why did he allegedly commit the largest security breach in American history - and why was it so easy? Is Manning a traitor or a whistleblower? Is long-term isolation an outrage to American values - or the new norm? Are the leaks revolutionary or a sensational nonevent? Which is the greater security threat, routinized elite secrecy or flashes of transparency? And what impact does new information really have?

The astonishing leaks attributed to Bradley Manning are viewed from many angles, from Tunisia to Guantnamo Bay, from Foggy Bottom to Baghdad to small-town Oklahoma. Around the world, the eloquent alleged act of one young man obliges citizens to ask themselves if they have the right to know what their government is doing.